O'Brien's week gets better and better as Idaho strikes 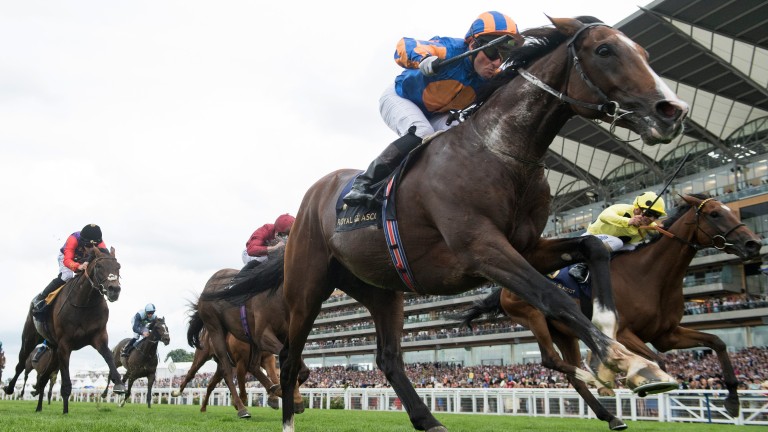 Seamie Heffernan had his stick knocked out of his hand when beaten a head on Highland Reel in last year's Hardwicke, so victory 12 months later on the five-year-old's younger brother was especially sweet.

Idaho's half-length win from the strong-finishing Barsanti in the Group 2 that is a Group 1 in all but name was the rider's fourth and most important win at Royal Ascot, and he admitted it was a feeling he could easily get addicted to.

It was no great surprise that the rock solid Idaho, who had been placed in two Derbys last year and been odds-on for the St Leger when unseating Heffernan, should have a race like the Hardwicke in him.

It was understandable too that the Ballydoyle number one Ryan Moore should have opted instead for the Queen's Dartmouth, who had beaten Highland Reel in 2016 and started favourite.

What was more surprising, though, was the pre-race encounter Heffernan recounted which plainly led him to think that this was his lucky day.

Heffernan revealed: "Before I went out I shook hands with a few Chinese fellows and I could see the confidence in their eyes, so I was happy going out to ride."

Of the race itself, he added: "I had a lovely draw and I had the race worked out tactically, and it went as I thought it would. I wanted to follow Dartmouth, and my lad's a good stayer. The Coronation Cup was his first run and he got there a bit late. He'd come forward and we thought he was ready to run well.

"Having got beat in this race last year, when I had my stick knocked out of my hand, it was nice to come back and win the race."

O'Brien, enjoying his second winner of the afternoon and his sixth in a week that had started underwhelmingly, said: "Idaho is a full-brother to Highland Reel and, being by Galileo, they don't know when to give up.

"We've been very happy with him since Epsom. His older brother was able to cope with it because he was more experienced, but it wasn't really fair to him. He got off the plane only an hour and 10 minutes before the race so it was a big call on him."

He added: "What happened to him in the Leger last year is difficult to believe. He was coming down the straight hard on the bridle.

"He might come back here for the King George but he can do plenty of travelling, hopefully."

Trainer Roger Varian admitted he was "gutted" not to win with Barsanti, but added: "The winner wasn't stopping was he? But we didn't have quite as clear a run."

FIRST PUBLISHED 3:49PM, JUN 24 2017
I shook hands with a few Chinese fellows and I could see the confidence in their eyes, so I was happy going out to ride

Ascot collector's item as Dettori's flying dismount outshone by tearful groom Love brightens the week for Aidan O'Brien but draw-bias punters are wrong-footed What heights can Love conquer now? We assess her comeback victory at Royal Ascot 'Course form is the best form' - find out which trainer is feeling bullish His place, his moment, his destiny - Stradivarius on the cusp of Ascot history Confirmed runners and riders for Friday's Coronation Stakes at Royal Ascot