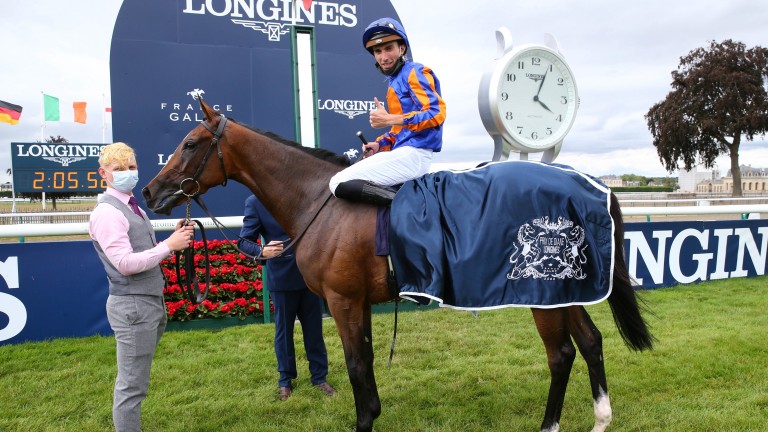 John Gosden has been victorious over Aidan O'Brien in two Group 1s in recent days and now it is the turn of another O'Brien – the legendary trainer's son Donnacha O'Brien – to try to get the better of Britain's champion trainer.

Gosden's Nazeef is three from three this season, with a Listed win at Kempton followed by a head success in the Group 2 Duke of Cambridge at Royal Ascot and a first Group 1 win in the Falmouth Stakes over a mile at Newmarket's July meeting. She is a filly going places fast and the step up in trip is expected to bring about further improvement.

But O'Brien the younger brings Fancy Blue to this battle. His father has lent him the services of stable jockey Ryan Moore, meaning O'Brien senior calls upon Gosden's regular ally Frankie Dettori for the ride on his own challenger – Magic Wand.

Fancy Blue is already a Group 1 winner herself, at a mile and a quarter no less, in the Prix de Diane. That she is proven at the trip is in her favour, and it is hard to suggest Nazeef's speed could catch her out as Fancy Blue was second herself to Peaceful in the Irish 1,000 Guineas. It promises to be a wonderful clash of the generations between two proven Group 1 performers open to further improvement.

Donnacha O'Brien said: "She beat the right horses at Chantilly and they came clear of the rest so it looks like strong form. She's very genuine, tries hard and takes her work well. She’s a very uncomplicated and talented filly who relaxes and is able to quicken. I think she can probably be competitive in Group 1s anywhere from a mile to a mile and a half."

On the unique challenge presented by Goodwood he added: "You can’t be sure until you go there, but she’s quite easy to ride in a race and adaptable. I’d say she’s got a very good chance of handling it all and she’s been in great form since France."

O'Brien senior's challenger Magic Wand is a Group 1 winner in her own right, landing the Mackinnon Stakes at Flemington at the back-end of last year after a string of 'yardstick performances'. She has been second a further eight times in Group 1s around the world.

Fancy Blue, Nazeef and Magic Wand are not the only Group 1 winners in the field, with last year's scorer – Japanese superstar Deirdre – back for more, meaning more than half of the seven-strong field have already been successful at the highest level. 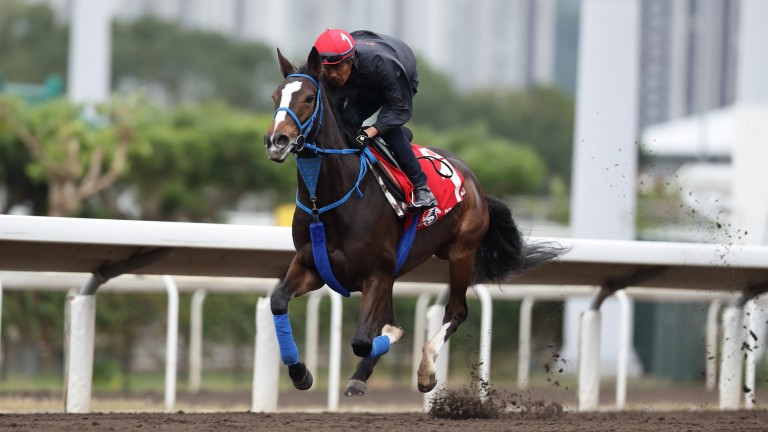 Last year Deirdre was held up and came with a swooping run up the far rail, but big-race partner Oisin Murphy is considering a change of tactics due to the lack of pace in the race and the fact Fancy Blue, the horse he sees as the one to beat, has a forward way of going.

He said: "She's trained very well and there doesn't look like there's a lot of pace in the race. Donnacha O'Brien's filly was given a prominent ride when winning in France last time. It was a very good ride but I might ride Deirdre a little bit more forward this time. She seems in good order and I'm looking forward to the race."

Weight for age seems to favour the Classic generation in the Nassau. Six of the last eight runnings have been picked up by three-year-olds, despite just representing 54 per cent (34 of 63) of runners in that time. This year only Fancy Blue and One Voice represent the younger challenge.

Amanda Perrett, trainer of Lavender's Blue
She probably needed that first run back at Royal Ascot. We've given her plenty of time to get over it and she has some nice form from last year. I think the step up in trip will suit again and, while we have a bit to find, we'll give it our best shot.

Aidan O'Brien, trainer of Magic Wand
She ran a lovely race in the Eclipse and she’s been in great form since. The better the ground, the better chance she has so hopefully the rain stays away.

Nazeef: winner of the Falmouth Stakes and unbeaten in three starts this season
Alan Crowhurst

John Gosden, trainer of Nazeef
We kept her in training because we thought she was black type but she went and won the Listed race at Kempton in some style from off what wasn't a great pace. Very quickly she went on to Ascot and battled away there and then did the same again the other day. We thought she would progress but the speed of her progression was certainly not something we thought would happen in early June.  We're stepping up to a mile and a quarter. She's always given us the indication that it should suit her but you never know until you run because her pedigree doesn't necessarily scream it. But her style of racing would seem to lend itself well to a mile and a quarter there. It looks a small but quality field.

Alastair Donald, racing manager to King Power - owners of Queen Power
I'm very excited to see her run, she's finally got her optimum conditions; fast ground, a mile and a quarter – and I think she could run a big, big race.

Jessica Harrington, trainer of One Voice
She got no sort of run at the Curragh last time, but that’s life! She had no race there and we thought why not bring her over to Goodwood and see how she gets on. She’s done well this season.

FIRST PUBLISHED 6:00PM, JUL 29 2020
I think she can probably be competitive in Group 1s anywhere from a mile to a mile and a half