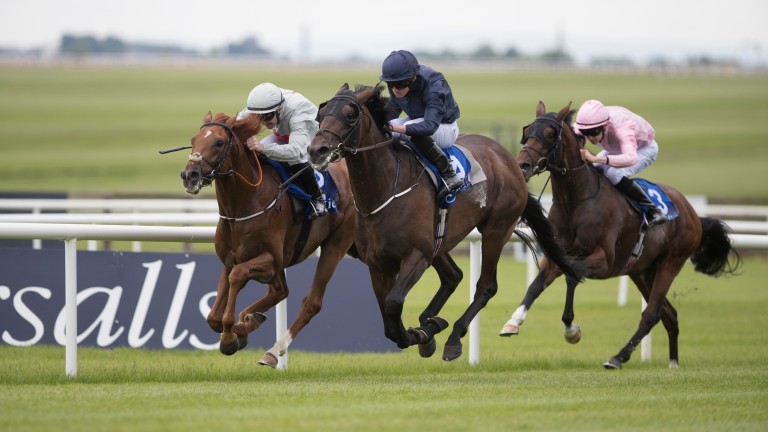 Homesman: Gallinule Stakes winner heads to New York for the Belmont Derby, where he is joined by stablemate Whitecliffsofdover
Patrick McCann (racingpost.com/photos)
1 of 1
By Nicholas Godfrey 10:55AM, JUL 9 2017

Belmont Park revamped its programme a couple of years ago, resulting in Saturday's lavishly endowed Stars and Stripes Festival featuring five Graded stakes. Unusually, the highlights are a pair of Grade 1 contests on turf for three-year-olds – and guess whose horses are in New York bidding to claim the moolah?

Aidan O'Brien, of course, who landed the $1.25 million Belmont Derby 12 months ago with Deauville. The world's most powerful stable fields Homesman (Colm O'Donoghue) and Whitecliffsofdover (Wayne Lordan) this time around in a race that has rapidly become America's most prestigious on grass for the Classic generation since being rebranded from the old Jamaica Handicap. 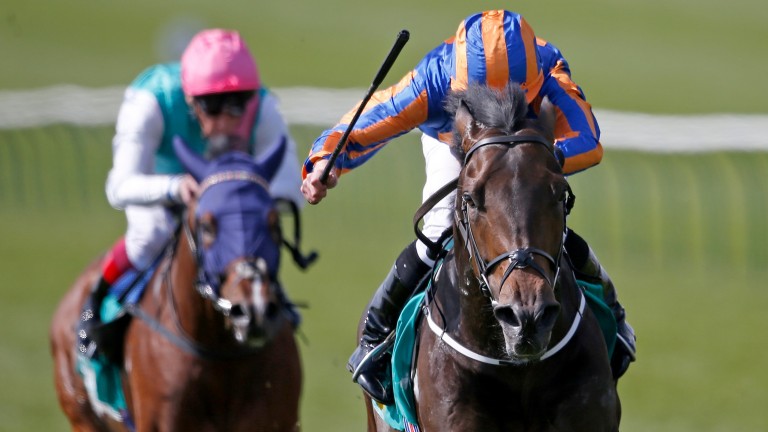 Whitecliffsofdover: Free Handicap winner steps up in trip at Belmont after making the running in the Jersey Stakes
Alan Crowhurst/Getty Images
The O'Brien pair are both sons of War Front, yet while Free Handicap winner Whitecliffsofdover is stepping up in trip markedly after setting the pace in the Jersey Stakes, Gallinule Stakes winner Homesman was last seen staying on over a mile and a half in the King George V Handicap at Royal Ascot. Both run on Lasix.

"Whitecliffsofdover will be tackling the distance for the first time and we think a mile and a quarter will suit him," said O'Brien. "Homesman ran quite well when fifth at Ascot and we're dropping him back to the trip over which he won the Gallinule Stakes at the Curragh. Both of them are in good form."

While any Ballydoyle representative will command respect among the US turf division, such is the strength of the domestic team that they are unlikely to have things all their own way.

Japanese-bred Yoshida (Bill Mott/John Velazquez) is rated star quality after a pair of four-length victories in lesser grade at Keeneland (made all) and Pimlico (came from miles back after getting a bump at the gate).

Also in a classy-looking field are Yoshida's Mott-trained stablemate Good Samaritan (Joel Rosario), luckless from a wide draw at the Breeders' Cup but long since considered potentially top class.

The Ballydoyle representative in a $1m event Aidan O'Brien has never won is Key To My Heart (Wayne Lordan), a daughter of Galileo who won a Listed Irish Oaks trial at Naas. "She's going up in class but we've been happy with her since her win," said O'Brien.

Perhaps of even greater interest to punters, however, is owner Peter Brant's Prix de Diane runner-up Sistercharlie (Chad Brown/John Velazquez), although she breaks from the outside gate in a 12-runner field on her North American debut.

A Group 3 winner in France, Sistercharlie only just missed out in the French Oaks after charging home to be beaten a length by Senga. She now represents US champion trainer Chad Brown, who rules the roost with his turf fillies and generally made his name with similar former European types.

Brown is mob-handed here as he seeks his fifth winner in six runnings (including in its former guise as the Garden City), his other runners being headed by New Money Honey (Javier Castellano), who held off the European visitors in the Breeders' Cup Juvenile Fillies' Turf last year.

She regained the winning thread by making all in the Grade 3 trial for this a month ago. Brown-trained stablemate Fifty Five (Jose Ortiz) won the Florida Oaks, while Uni (Irad Ortiz) is making her US debut.

Kentucky Oaks runner-up Daddys Lil Darling (Ken McPeek/Dylan Davis) returns to domestic action after her abortive trip to Epsom, where she forced Olivier Peslier to jump off as she bolted before the Oaks start. The former Richard Hannon-trained Grizzel (Michael Doyle/Davy Moran) is also on a hat-trick.

Although this $750,000 lost its Grade 1 status nearly a decade ago, it continues to attract some of the bigger names among the older horses on the east coast, headed this year by Shaman Ghost (Jimmy Jerkens/Javier Castellano).

Runner-up to Arrogate in the Pegasus World Cup, the five-year-old is making a habit of winning these famous old handicaps, having last year won the Woodward and the Brooklyn Invitational before adding both the Santa Anita Handicap and Pimlico Special on his two most recent starts.

He shoulders top weight for trainer Jimmy Jerkens, who has won this in the last two years with Effinex. Shaman Ghost, though, was only fifth here 12 months ago, although his trainer said he coughed afterwards.

He breaks from the outside post in a field of six also featuring Keen Ice (Todd Pletcher/Jose Ortiz), who two seasons ago earned notoriety by beating American Pharoah during his Triple Crown season in the Travers Stakes.

Practical Joke (Chad Brown/Joel Rosario), a Grade 1 winner last year, reappears for the first time since finishing fifth in the Kentucky Derby. He has to give 6lb to Wood Memorial runner-up Battalion Runner (Todd Pletcher/John Velazquez).

Impressive Dubai Golden Shaheen winner Mind Your Biscuits (Chad Summers/Joel Rosario) bids for revenge over Unified (Jimmy Jerkens/Jose Ortiz), who beat him at Gulfstream Park in February. Mind Your Biscuits if 4lb better off for a neck, however.

>>Mubtaahij, who won the UAE Derby at Meydan in 2015 for Mike de Kock, has joined Bob Baffert's string.

FIRST PUBLISHED 2:45PM, JUL 7 2017
Whitecliffsofdover will be tackling the distance for the first time and we think a mile and a quarter will suit him

Confirmed runners and riders for Friday's Coronation Stakes at Royal Ascot Follow the market and you won't go far wrong with Ward's Royal Ascot juveniles Is this Aidan O'Brien's greatest Ascot masterstroke or a total shot to nothing? Cheltenham, Aintree - and now Ascot? De Bromhead adds filly to Coronation mix 'He shows everything at home - he relaxes, he quickens, he gallops' Ballydoyle battalions primed to give Aidan O'Brien a ninth Queen's Vase win