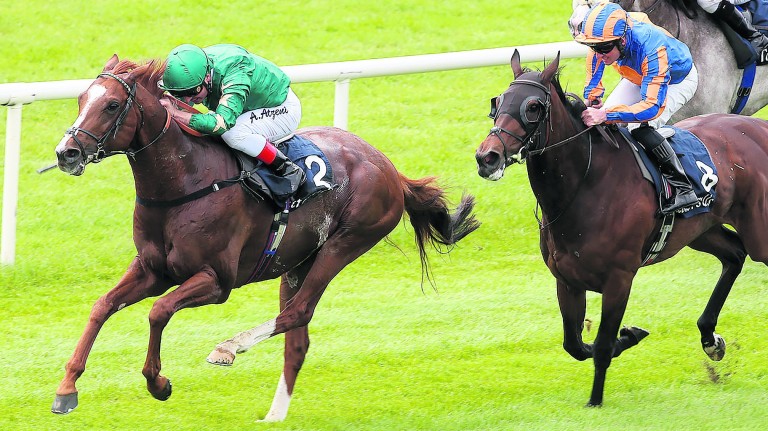 Somehow is likely to head Aidan O’Brien’s bid for a third consecutive win in the Group 1 Pretty Polly Stakes at the Curragh on Sunday.

A winner at Listed, Group 3 and Group 2 level, Somehow has run in two Group 1s this year, finishing fourth in the Lockinge Stakes before running second to Decorated Knight in the Tattersalls Gold Cup at the Curragh last month.

O’Brien said yesterday: “We have three fillies in the Pretty Polly and Somehow is likely to be our main runner.”

Rain Goddess, runner-up in the Sandringham Handicap at Royal Ascot last week, and the maiden Pocketfullofdreams are the other Ballydoyle fillies among the 14 acceptors for the 1m2f event, which O’Brien won with Minding a year ago and with Diamondsandrubies in 2015.

The John Gosden-trained Journey, Roger Varian’s Nezwaah and the Sir Michael Stoute-trained Smart Call, who ran fourth in the Duke Of Cambridge Stakes at Royal Ascot, are the British-trained acceptors.

Outlining his plans for the race, Dermot Weld said: “Zhukova is in good form and the intention is to run her, although we’ll leave a final decision until probably Friday morning. Shamreen is also in the race and we haven’t decided whether she will run.”

Zhukova landed the Grade 1 Man O War Stakes at Belmont Stakes last month while Shamreen, winner of the Blandford Stakes at the Curragh in September, has yet to race this season.

Verbal Dexterity, an impressive winner over six furlongs on his debut at the Curragh 18 days ago, has been supplemented for the Group 2 GAIN Railway Stakes over the same course and distance on Saturday.

Trained by Jim Bolger for his wife Jackie, the son of Vocalised powered his way to a nine-and-a-half length win and has been added to Saturday’s race at a cost of €11,500.

Aidan O’Brien, who has sent out 12 winners of the event, has eight of the 18 acceptors, including Norfolk Stakes winner, Sioux Nation, and Murillo, who finished third in the Coventry Stakes.

He said: “We’re going to wait and see what happens with the weather and the ground before making plans for many of the races, including the Railway Stakes, at the weekend.”

Frontiersman, runner-up to Highland Reel in the Coronation Cup, and Wicklow Brave, winner of last year’s Irish St Leger and who finished fourth in the Belmont Gold Cup Invitational Stakes in New York early this month, are among the 14 entries for the Group 2 Comer Group International Curragh Cup on Sunday.

Giving an update on ground conditions at the track, clerk of the course, Brendan Sheridan, said yesterday: “We had 21 millimetres of rain overnight and the ground is good in the straight and good, good to firm in places on the round course.

“The forecast is for mainly dry weather up to tomorrow evening and into Thursday morning when showers, some of them heavy, are likely.”

FIRST PUBLISHED 6:36PM, JUN 27 2017
The forecast is for mainly dry weather up to tomorrow evening and into Thursday morning when showers, some of them heavy, are likely