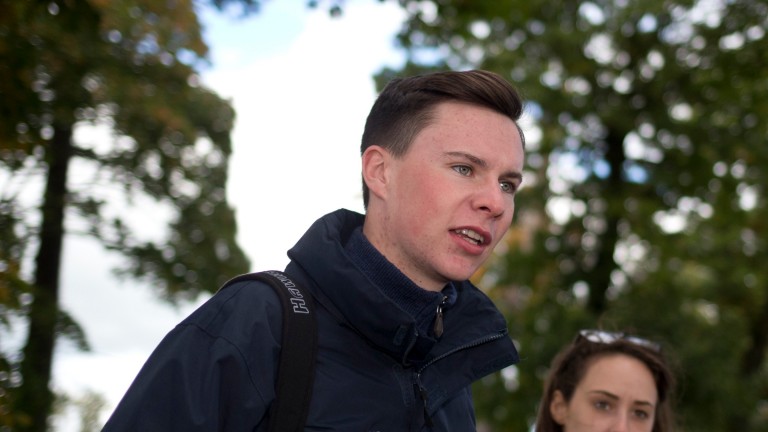 Joseph O'Brien: has his first jumps runners in Britain at Doncaster
Patrick McCann
1 of 1
By David Milnes 6:00PM, DEC 9 2016

Joseph O'Brien saddles his first Jumps runners outside of Ireland at a track where he enjoyed St Leger success as a jockey three years ago and is two-handed in the finale with Lord Justice and Zig Zag.

The contest hosted subsequent Triumph Hurdle winner Peace and Co in 2014 and O'Brien will be hoping that his pair can yet join his smart prospect Landofhopeandglory at Cheltenham in March.

The duo reoppose after finishing third and sixth respectively behind the useful Mega Fortune at Down Royal last month, since when Zig Zag has chased home stablemate Landofhopeandglory at Punchestown.

The home defence is led by ex-Flat performer Cliffs Of Dover who has won five of his six starts over hurdles, four of which under  today's jockey Harry Cobden.

Paul Nicholls' hope returns to Yorkshire on a five-timer after his latest nine-length triumph in a Listed hurdle at nearby Wetherby last month.

The dark horse in the seven-runner line-up is the Alan King-trained Timoteo who will have more supporters than the rest put together as he is owned by the Million In Mind partnership, who tasted success in the Triumph Hurdle with Mysilv in 1994.

Their latest recruit was placed in two novice hurdles in France last summer, most recently at Lyon-Parilly in June on which occasion she finished runner-up at 33-1.

The market has been an average guide to this in recent times with Peace And Co (10-11) in 2014 the only winning favourite in the past six runnings.

Paul Nicholls, trainer of Cliffs Of Dover
He's a nice horse and his form stacks up. He's really progressive, but he's returning from a month off and I'm not sure he's quite as fit as he was.

Joseph O'Brien, trainer of Lord Justice and Zig Zag
The juvenile hurdle races in Ireland have been very competitive, so we're letting them take their chance in the hope they can pick up some prize-money. Lord Justice has done well, winning two of his four starts while Zig Zag has also been very consistent and ran a good race last time when second to Landofhopeandglory at Punchestown last month.

Richard Newland, trainer of Bishop Of Bling
It's a tall order in this type of race but he needs the experience and if he can pick up some prize-money, it will be a bonus. I think Cliffs Of Dover looks a good thing in the race.

Alexandra Dunn, trainer of Shrubland
He's already given us a bit of fun when he was fourth at Sandown first time over hurdles. It's a nice day out and hopefully he'll run well again.

Alan King, trainer of Timoteo
He's a French recruit for the Million in Mind syndicate and he was placed in France. I've been happy enough with him at home and this first run for us should tell us where we stand.

FIRST PUBLISHED 6:00PM, DEC 9 2016
The juvenile hurdle races in Ireland have been very competitive, so we're letting them take their chance in the hope they can pick up some prize - money

'He could run a big one' - Joseph O'Brien and others on their biggest chances 'Course form is the best form' - find out which trainer is feeling bullish His place, his moment, his destiny - Stradivarius on the cusp of Ascot history Ballydoyle battalions primed to give Aidan O'Brien a ninth Queen's Vase win 'I can't believe his price' - find out who's bullish before the Wolferton Can one-of-a-kind Jim Bolger pull off more Group 1 heroics with Poetic Flare?