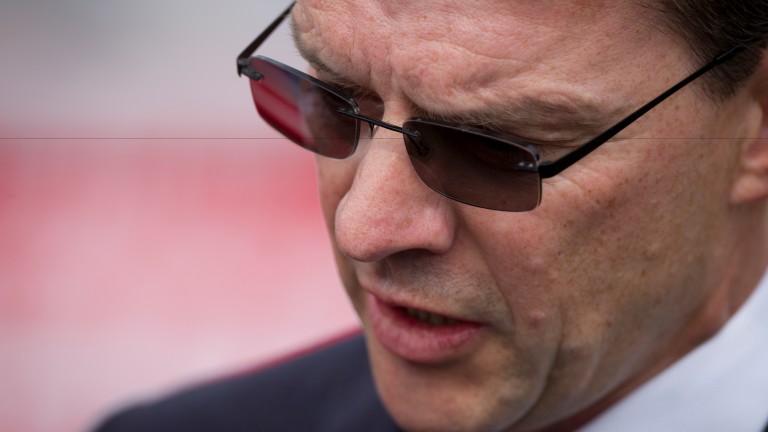 Aidan O'Brien: has the favourite or second favourite in five of the Breeders' Cup races
Patrick McCann (racingpost.com/photos)
1 of 1
By Graham Dench 10:44AM, OCT 28 2016

Aidan O’Brien is ready to go into battle with his strongest ever Breeders’ Cup team as he bids to put the seal on his stunning season at Santa Anita.

In a year that has seen him snare an incredible 21 Grade 1 or Group 1 Flat wins and saddle the first three home in the Prix de l'Arc de Triomphe, O'Brien heads west with the favourite or second favourite in five of the races at next week's extravaganza in California.

O’Brien, who has saddled ten Breeders' Cup winners, expects to have a dozen runners as he closes in on Bobby Frankel’s record 25 Grade 1 or Group 1 wins in a year.

Bookmakers make it odds-against him reaching that milestone next weekend – one winner is Coral’s 6-4 favourite, and he is 13-2 to have three or more – but O'Brien has the Arc first two of Found and Highland Reel leading the team, backed by multiple Group 1 winners Seventh Heaven and Alice Springs, plus a clutch of other stars.

O’Brien sought to play down his prospects, pointing out that "there are so many variables which you can’t do anything about" and adding that he is "always happy just to get one [winner]" – before proceeding to make strong cases for many in the team.

Found bids to succeed where 14 previous Ballydoyle runners have failed, O’Brien confirming she will take on California Chrome and Arrogate on dirt in the Breeders’ Cup Classic. It will be her first run on the surface, but the trainer is optimistic she will handle it.

O’Brien, who could not confirm that the Classic would be Found’s last race, said: "Anything is possible with Galileos. He ran well on the track himself after a very long and gruelling season and Found is an incredible mare. She handles fast ground and she handles soft ground, and she seems very versatile.

"She is obviously a filly with a lot of tactical speed and has been very competitive in Group 1s from a mile to a mile and a half. The dirt is an unknown, but it’s very possible the lads will let her take her chance. It’s a very hard race to win and we would be over the moon if she could win, but she’ll be doing her best as always. She’s done incredible things all the way since she was a two-year-old and we’ll talk about her future after this.”

O’Brien has high hopes for Highland Reel, who he points out would have time to go on to the Japan Cup and also Hong Kong if connections chose.

The trainer reckons the four-year-old has all the attributes required for the Turf, which has been designated a second preference for last year’s winner Found, and said: “He’s a great horse. He’s tough and consistent and he runs to an unbelievable level every time. He handles all types of ground and is very happy on fast ground. He stays a mile and a half well and has plenty of tactical speed. Everything has gone well since Chantilly.”

O’Brien also has Pretty Perfect as first reserve and said: “We would be very happy to let her run. She’s a tough, hardy and consistent filly.”

Alice Springs, who was winning her third Group 1 since July when landing the Sun Chariot Stakes, is third favourite for the Mile behind Tepin and Limato and is another leading chance for Ballydoyle.

O’Brien said: “She seems to be getting quicker as the year has gone on and she’s a strong traveller who loves fast ground. She has progressed with every run and we were very happy with her at Newmarket.”

The Irish and Yorkshire Oaks winner Seventh Heaven, who could be joined by Pretty Perfect in the Filly & Mare Turf, has to put behind her a moderate effort at Ascot on Champions Day, but O’Brien is inclined to forgive her.

He said: “We were disappointed at Ascot, but everyone knows it was a bit of a mess of a race. She’s in good form, she loves fast ground and she’ll love a flat track."

O'Brien on his other Ballydoyle challengers

Breeders’ Cup Juvenile Turf
You couldn’t be sure Intelligence Cross would get the mile but it’s very possible. He loves fast ground and I think he’ll love going around the bend. Lancaster Bomber obviously should get it and he will love the ground as well.

Breeders’ Cup Juvenile Fillies'
Hydrangea obviously gets the trip well as we saw in the Fillies’ Mile and it’s very possible she’ll go. Roly Poly will be stepping up in trip but she loves fast ground. Promise To Be True might go to France instead on Sunday for a 7f race. I haven’t spoken to Ryan [Moore], but I would imagine he would be on Roly Poly.

Turf Sprint
Washington DC ran very well in the Abbaye and is slowly progressing. He loves fast ground and although Chantilly was a very fast five and he was very comfortable, this is a fast six and downhill for the first bit.”

Breeders’ Cup Mile
Cougar Mountain is first reserve and should get in with Alice Springs. He wants fast ground and a good pace to be seen at his best. It doesn’t happen very often, but that’s when he gives his best run. It doesn’t look as if Hit It A Bomb will.