O'Brien quartet out to dominate while Head hopes to Illuminate 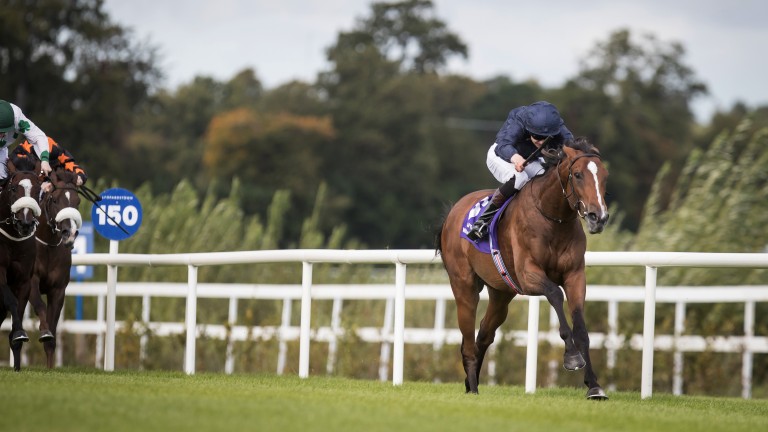 The mount of Donnacha O'Brien, Nelson is one of four runners in the Criterium de Saint-Cloud for his trainer.
Patrick McCann (racingpost.com/photos)
1 of 1
By Scott Burton 6:00PM, OCT 28 2017

On a weekend when numbers and headlines have been swirling around Aidan O'Brien, it is worth pausing to reflect on the fact that the maestro of Ballydoyle can saddle four runners in the Racing Post Trophy one day and still have four more impeccably bred middle-distance two-year-olds left over to contest this race 24 hours later.

If the ante-post market for the Investec Derby is to be believed then Ryan Moore will have had a hard time ignoring the claims of decisive Zetland Stakes winner Kew Gardens in favour of Delano Roosevelt, who chased home Saxon Warrior in the Group 2 Beresford Stakes at Naas with his stablemate a neck behind in fourth.

Wind back a fortnight from that race and both were soundly put in their place by Nelson, who subsequently just missed out behind Roaring Lion at Newmarket.

O'Brien said of his runners: "Delano Roosevelt stayed on well when second in the Beresford last time, We always thought he'd get further than a mile and he's going there in good form.

"Kew Gardens got the trip well when winning a Listed race at Newmarket last time and we've been happy with him since."

The trainer added: "Nelson is stepping up in trip having run a good second in the Royal Lodge last time. We're happy with him and we've always thought he'd get further than a mile.

"Hunting Horn has had only two runs and progressed to finish second at Galway. He's a nice sort and, while he's stepping up a lot in grade, we think he's improved."

Magic out to Stage a comeback after Luminate reverse

Of the three remaining runners, Highclere's Luminate boasts the best form, having surged to a three-length success in the most high-profile trial for this race, the 1m1f Prix Conde at Chantilly.

Trainer Freddy Head said: "She's in very good form. She loves soft ground and I expect the trip to be fine for her. She seems just as well as before her last race."

Stage Magic led the field into the straight at Chantilly before subsiding very tamely but Charlie Appleby is hoping he can put that run behind him.

"Stage Magic was disappointing on his last start but has done nothing but please us since then," said the trainer.

"A mile and a quarter should suit him and he's proven on soft ground, while we're putting on some cheekpieces to aid his concentration.

"His preparation has gone well and a return to the form of his win in the Prix des Chenes would make him competitive."

The field is completed by the Satoshi Kobayashi-trained Maiden Success, who has plenty to find on the figures but who took a major step forward for trying this trip on heavy ground at Compiegne this month when running out a three-length winner.

Conditions at Saint-Cloud were drying on Saturday and heading from soft in the direction of good to soft, though up to 4mm of rain was forecast for Sunday morning.

FIRST PUBLISHED 6:00PM, OCT 28 2017
We always thought he'd get further than a mile and he's going there in good form