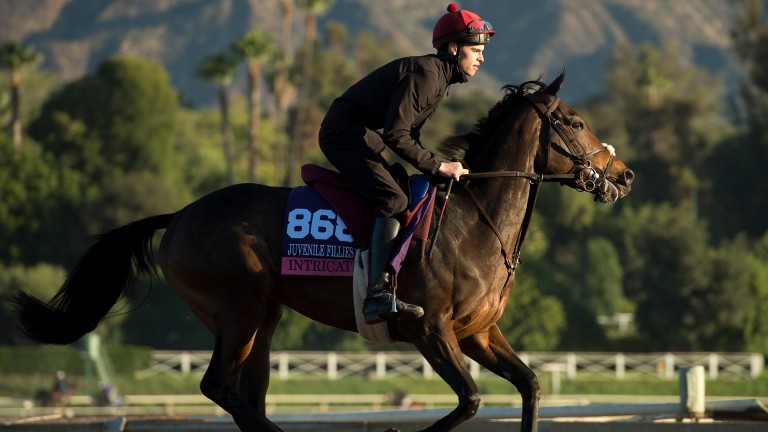 Just five months on from saddling his first runners as a licensed trainer Joseph O'Brien has a leading chance of a Breeders' Cup victory with Moyglare heroine Intricately.

She was a surprise 25-1 winner at the Curragh, where she saw off by a short head the challenge of Hydrangea, one of two runners here for O'Brien's father Aidan. The other, Roly Poly, fell short by the same margin in the Cheveley Park last time out.

The home contingent is led by the Kathy Ritvo-trained Spain Burg, until recently based with Xavier Thomas-Demeaulte in France, from where she was sent out to win the Rockfel from Fair Eva in September. Frankie Dettori took the ride at Newmarket and maintains the partnership at Santa Anita.

The other North American hope to take close note of is La Coronel, who represents Tepin's trainer Mark Casse, who landed this race last year with 2016 Filly & Mare Turf contender Catch A Glimpse. La Coronel warmed up for this task with a commanding four-and-a-quarter-length win in a Grade 3 at Keeneland last month.

Following her run before that, a similarly powerful maiden win at Saratoga, Casse reported that jockey Florent Geroux had dismounted and told connections: "I think we have another Catch A Glimpse".

Top US turf trainer Chad Brown is the leading trainer in the Juvenile Fillies Turf with two wins from eight runnings and saddles two this time, New Money Honey and Rymska.

Aidan O'Brien, trainer of Hydrangea and Roly Poly
We were interested to see what Roly Poly does on the fast ground. Hopefully Hydrangea is quick enough.

Chad Brown, trainer of New Money Honey and Rymska
I cross-entered in the dirt as I think New Money Honey favours a little more distance and I’ve always felt she'll handle the dirt, but at the end of the day she's coming off a nice Grade 3 win on the turf. I felt like it probably wasn’t the right stage to experiment on, so I just stuck with the turf, prayed for a good post and she got it. Hopefully she can get up in time going a mile. I'm so impressed with Rymska’s development this month. She’s earned her way into this race on her work.

Frankie Dettori, rider of Spain Burg
She looks like my likeliest chance of a winner this weekend. Winning the Rockfel brought us here and she’s such a likeable filly. The way she ran on at HQ shows you the step up in trip to a mile should be no problem. She’s going in the right direction and I’ll be gutted if she doesn’t go well. She's ready to shine. I’m happy with the draw as well.

Joseph O'Brien, trainer of Intricately
I'm a little bit worried about the tight track but other than that she's in good form. She’s easy to train and easy to be around. She’s a genuine filly with a good attitude. I didn't expect that we'd have a filly as good as this one in this first year and we're very lucky how it panned out. It's great to be here.

FIRST PUBLISHED 6:00PM, NOV 3 2016
I'm a little bit worried about the tight track but other than that she's in good form