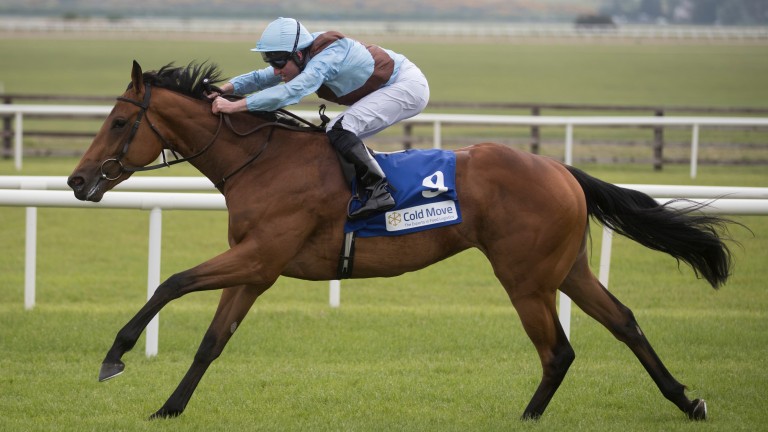 Aidan O'Brien, successful in this race for the first time with Brave Anna two years ago, has two leading contenders in Fairyland and Just Wonderful.

Seamie Heffernan, who rode Brave Anna to victory in 2016, was on board Fairyland when she won the Listed Marble Hill Stakes at the Curragh last time and he again rides the daughter of Kodiac, who has won both starts. Like Brave Anna, Fairyland carries the colours of Evie Stockwell, mother of John Magnier.

Ryan Moore, who is seeking a first win in the race, partners Just Wonderful, who made a winning debut at the Curragh last month and is a daughter of Dansili from the family of Galileo and Sea The Stars.

Ward goes for another juvenile strike with Cove

Wesley Ward is represented by Stillwater Cove as he attempts to add to his tally of seven two-year-old winners at the meeting. Stillwater Cove won her only start when scoring by a nose over four and a half furlongs on the dirt at Keeneland in April. Joel Rosario, who won the Norfolk Stakes on No Nay Never for Ward in 2013 and again this week on Shang Shang Shang, is in the saddle.

Gosden and Dettori team up with Hideaway

John Gosden, who trained the 2012 winner Newfangled, is represented by Haydock maiden winner Angel's Hideaway. Jockey Frankie Dettori's only win in the race was on Sander Camillo for Jeremy Noseda in 2006.

Matthieu Palussiere, who sent Different League from France to land the prize a year ago, is represented by No More Regrets, the mount of Olivier Peslier.

By contrast, Mark Johnston is seeking a first win in this race and he is represented by dual winner Main Edition and Octave.

John Gosden, trainer of Angel's Hideaway
She's a sweet filly who will love the fast ground and won well at Haydock last time. We'll see how her draw pans out from stall six but she's going the right way.

Yan Durepaire, trainer of Byron Bay
This has always been the plan if she won nicely first time out and she confirmed what we expected at Chantilly. I wanted to test her over a straight six furlongs and she responded well, showing a lot of maturity. At one stage she was tucked in but she stuck her nose in between horses and took off. She will enjoy the ground and she has always been a quick learner.

Jessica Harrington, trainer of Chicas Amigas
We were second in this race with Alpha Centauri and we're hoping this filly will run a big race. She was second in a Listed race at Naas last time and is owned by a cracking group of women – the It's All About The Girls syndicate – who are sure to enjoy the day.

Aidan O'Brien, trainer of Fairyland and Just Wonderful
Fairyland has done everything right so far and put up a good performance when beating the colts in the Marble Hill Stakes last time. She's in good form, as is Just Wonderful, who won on her debut at the Curragh. Both are smart fillies and we've been happy with them since their runs.

Charlie Appleby, trainer of La Pelosa
She's a breeze-up filly who came from the Craven meeting. She won impressively on her first start and she's a very strong individual who has definitely come forward for that and so she should be very competitive.

Charlie Johnston, assistant to his father Mark, trainer of Main Edition and Octave

Main Edition has been very impressive on both starts, and on the second occasion she was conceding a penalty to colts and still won very comfortably. She's more than earned her place and must have a leading chance. Octave got a nice form boost earlier in the week from Calyx With hindsight conceding a penalty to that aeroplane was almost impossible, but she still ran very well.

She's doing very well. I'm really excited. She had a fantastic work at Newbury the other day and hopefully she can run as well as Shang Shang Shang did when winning the Norfolk.

FIRST PUBLISHED 6:00PM, JUN 21 2018
Fairyland has done everything right so far and put up a good performance when beating the colts in the Marble Hill Stakes last time