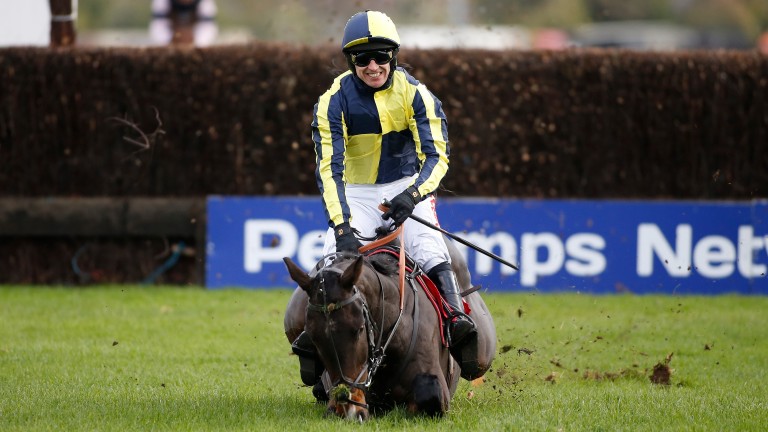 Barney Dwan looked to have the race in the bag when all but falling at the final fence last time
Alan Crowhurst
1 of 1
By Andrew King 6:00PM, DEC 12 2016

Punters following horses who are essentially winners without a penalty will want to be with Barney Dwan as the six-year-old had a novice chase at Kempton in the bag last month only to badly knuckle on landing at the final fence. He did well to stand up and finish second, and connections will be hoping for a bit more luck in running this time.

Paddy Brennan will again take the ride and he knows the six-year-old well as he has been on board for two of his three successes over hurdles, including when he landed the Grade 3 EBF Novices’ Handicap Hurdle Final at Sandown last March

The Paul Nicholls factor at Wincanton will see plenty of support for Connetable as the champion trainer boasts a 33% strike rate with his chasers at the Somerset circuit over the past five years. Connetable proved himself a classy hurdler last term when scoring in Listed company at Sandown and has the make and shape to do better over fences.

Fergal O’Brien, trainer of Barney Dwan
He did everything but fall at the final fence at Kempton when looking certain to win. It was just one of those very unlucky things as he'd jumped really well on his chasing debut and has seemed in great form at home since. We've made lots of entries for him since and hopefully we've picked the right one.

Philip Hobbs, trainer of Brother Tedd
I was very pleased with his jumping last time at Ascot and the hope is that he gets into a nice rhythm at his fences this time. If he does he has plenty going for him and he has to be the one they have to beat.

Colin Tizzard, trainer of Robinsfirth
He was one of the nicest young hurdlers we've had but he got a leg after running at Cheltenham nearly two years ago and then when we were ready to bring him back he got a bit jarred up. We've been waiting for this sort of ground and he's been working nicely at home. He's as fit as we can get him and he's gone well fresh in the past.

Harry Fry, trainer of Sir Ivan
He's rated 137 over hurdles and all he's won is a novice race at Exeter almost two years ago, so we have no choice but to try chasing with him. He's schooled well at home over fences but this looks a fairly warm contest on paper and he'll have to run up to his very best to win.

Paul Nicholls, trainer of Connetable
He needed the comeback run over hurdles as he's such a big stuffy horse but he still ran with credit. He was always going to make more of a chaser than a hurdler and this looks a good an opportunity as any for him to make his debut over fences. He's been going well at home since the Haydock run.