Intricately provided Joseph and Donnacha O'Brien with their first Group 1 success in the Moyglare
Alain Barr
1 of 1
By Lee Mottershead & Mark Scully 6:00PM, MAY 6 2017

Aidan is not the only O'Brien targeting Classic glory, with his sons Joseph and Donnacha teaming up with Intricately.

The pair got the better of their father at Group 1 level with this filly last season when she downed Hydrangea in the Moyglare Stud Stakes at the Curragh, a race in which Rhododendron came home third.

"Intricately seems in great form at home," said trainer Joseph. "I've been very happy with how she's done both physically and mentally from two to three. I'm really looking forward to the race and I think she's well worth a shot at it."

The filly ran fourth on her seasonal reappearance in the 1,000 Guineas Trial at Leopardstown, and O'Brien added: "I was pleased with her return.

"You have to remember it was her first run of the year, and I expect her to come on quite a bit from it. There's lots of improvement to come, I hope."

Having made much of the running when third to Daban in the Nell Gwyn, David Probert's mount Poet's Vanity has drawn well with stall 14, which gives her a berth by the stands' rail.

"The draw won't be a disadvantage as she's a long-striding filly," said trainer Andrew Balding.

"I'd hope she's come on for the Nell Gwyn run from a fitness point of view. It should have blown away the cobwebs and she ought to be 100 per cent now."

Bookmakers reckon that of Frankel's two 1,000 Guineas runners, Queen Kindly is the least likely to triumph, while even trainer Richard Fahey acknowledges a mile may not be the right trip for the Fred Darling fifth. 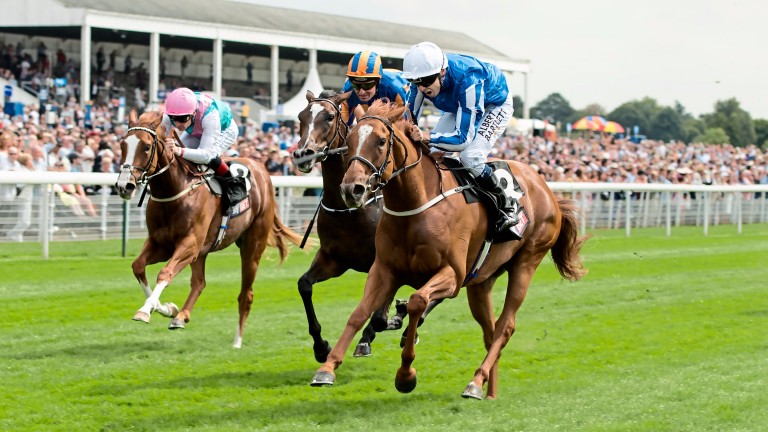 "She's a very good filly and we go there with a positive mind," said Fahey. "Whether she stays or not we'll find out, but there's only one Guineas and we can always come back to sprinting. Things didn't go to plan at Newbury last time and I didn't learn much, but she's in great form."

Kilmah deserves to take her chance

Kilmah saw Fair Eva disappearing into the distance when she chased her home at Ascot last July, while she finished behind another three of her Guineas opponents in the Nell Gwyn.

Trainer Mark Johnston, successful in the fillies' Classic with Attraction 13 years ago, said: "The last time I looked she was a 50-1 shot, but she deserves to take her chance. She'll have to run a personal best, of course."

Sky Lantern won the 2013 running of the 1,000 Guineas having finished second in the Nell Gwyn, and Hugo Palmer is hoping lightning can strike again.

Unforgetable Filly chased home Daban at the Rowley Mile last month and Palmer believes she could be capable of outrunning her odds.

"I'm really looking forward to the race," said Palmer. "I'm under no illusions about how much she needs to improve but I believe she has improved. It's been done before."

James Tate was taken by surprise when Urban Fox ran second in the Fred Darling at Newbury last month and that, coupled with her third behind Rhododendron in the Fillies' Mile at the end of last term, is fuelling the trainer's optimism she can put in another big run.

"We didn’t expect her to finish in the first three there, especially as the trip was too short and they only really raced for the last three furlongs, so I was delighted with that run," he said.

"It’s been plain sailing since, she looks a picture and is ready to run to her best. She's improved with every single race of her life and, although she needs to improve again to have a winning chance, I think she has a good each-way chance, even without improvement."

Victory for Dream Start would represent one of the most seismic shocks in Flat racing history but the once-raced filly, 13th in the Wood Ditton on her debut, does give Josephine Gordon a first Classic ride.

"I'm very excited," said Gordon. "I never expected it to come so soon and it's a good opportunity."

The rising star said of the John Ryan-trained filly: "It's a huge ask. She's a bit temperamental and has had only the one run, but she should have come on for it."

Ce La Vie has much to find

Well beaten in the Park Express Stakes at Naas on what was only the second start of her career, Ce La Vie would have to find a stunning amount of improvement to trouble the market leaders.

A winner on debut at Catterick late last year, she is clearly talented, but has 29lb to find with Rhododendron.

FIRST PUBLISHED 6:00PM, MAY 6 2017
You have to remember that it was her first run of the year and I expect her to come on quite a bit from it