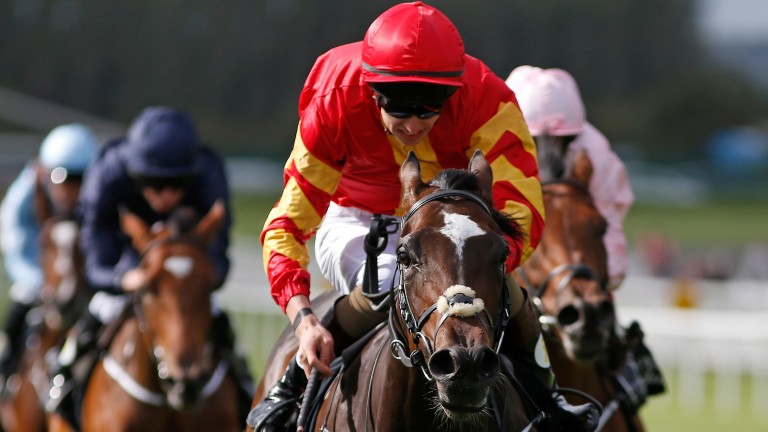 Donnacha O'Brien: can strike at Dundalk on Friday night thanks to Ruby Gates
Alan Crowhurst
1 of 1
By Brian Sheerin 7:03PM, OCT 27 2016

After making his own searing mark on the Breeders' Cup, Joseph O’Brien is ready to keep the faith in his younger brother Donnacha and give the teenager his biggest day in the saddle aboard Intricately in the Breeders’ Cup Juvenile Fillies Turf at Santa Anita next Friday.

The former champion jockey sent out out the homebred to cause a 25-1 shock in the Group 1 Moyglare Stud Stakes at the Curragh last month for a maiden Group 1 win on the Flat as a trainer, with his 18-year-old brother Donnacha on board.

Joseph was just 18 years when piloting St Nicholas Abbey to win at the Breeders' Cup in 2011 for his father Aidan, who will be in opposition on Friday with Hydrangea, Roly Poly and Promise To be True, and is ready to keep the fruitful family partnership intact with Donnacha, who will be three months younger for his first taste of the US highlight.

O'Brien, whose first Breeders' Cup runner is 4-1 favourite for the Grade 1 over a mile, said: “It was a fantastic thrill to be able to give him his first Group 1 win in the Moyglare Stakes at the Curragh.

“Donnacha has had a great season and has just got better and better all year. He's been riding very well and I wouldn’t want anyone else on her."

The budding trainer believes Intricately has much of what is required for her date with the Santa Anita turf next week.

The 23-year-old said: “The Breeders’ Cup is special and I enjoyed one of the best moments of my career in the saddle when St Nicholas Abbey won the Breeders’ Cup Turf, for sure.

“Intricately is in great form. Our biggest dangers look likeliest to come from the European runners. Obviously, Dad has a strong hand –with Hydrangea, Roly Poly and Promise To Be True – and I thought Spain Burg was very good when she won at Newmarket.

“Hopefully we get there in one piece and then we can start coming up with a plan. I think it'll be important to get a good draw. It’s quite a tight track and there's not much of a run to the first bend, so obviously she'd need to break well to get a nice early position.”

In order to take the plum ride Intricately's rider must get himself down to his lowest riding weight of 8st 10lb.

He said: “She has a low weight, which means it’s going to take a big effort to get down to that, but she's a fantastic addition to the yard and she'd be a great ride to have.

“It would be the biggest ride of my career – so far I've only ever ridden in Ireland or England. I'm due to ride in France this weekend for Dad, but I’m not sure what exactly I'll be riding yet.

Lots to look forward to

“I've put a lot of effort into my riding this year and Dad and Joseph have been a huge help. I wasn’t happy where my riding was last year but I'm really pleased with how my season has been going and I want to continue to work hard and improve.”

Joseph, who on Thursday was announced as the new racing ambassador for bookmaker Boylesports, believes he has lots to look forward to with the daughter of Fastnet Rock.

He said: “On her Moyglare form you could see her developing into a Guineas contender. The form of that race has worked out great and the 1,000 Guineas will be the plan for her over the winter months, win, lose or draw in America.

“She's tough, she finds plenty for pressure, she travels well and she should get a mile well next year. Newmarket or the Curragh should suit her better than Santa Anita, but she's still well entitled to take her chance in the race next week and we're looking forward to running her.”

Ivanovich Gorbatov should also help shorten the winter months for O’Brien, and last season’s Triumph Hurdle winner could start off his season in either the Fishery Lane Hurdle at Naas or the WKD Hurdle at Down Royal next month.

If Donnacha O'Brien wins the Juvenile Fillies Turf he would become the youngest successful jockey in Breeders' Cup history – taking the record off the trainer of his ride Intricately, his older brother Joseph. 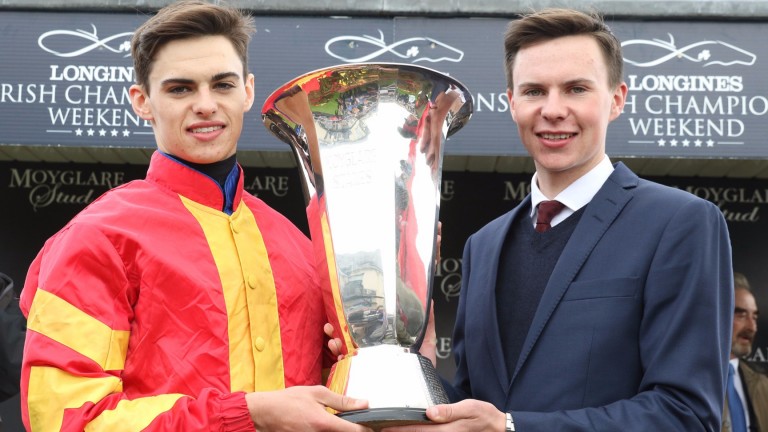 Donnacha and Joseph O'Brien with the Moyglare Stud Stakes trophy
CAROLINE NORRIS
Joseph had taken the record for youngest winning Breeders' Cup rider from another 18-year-old, Fernando Jara, by five months, as Jara was two months short of turning 19 when winning the 2006 Breeders' Cup Classic on Invasor.

Frankie Dettori rode his first Breeders' Cup winner aged 23, a couple of months before his 24th birthday, when Barathea won the Breeders' Cup Mile in 1994.

FIRST PUBLISHED 4:37PM, OCT 27 2016
He's just got better and better all year. He's been riding very well and I wouldn't want anyone else on her