Richard Forristal on what could prove an epic Classic occasion

Saxon Warrior, pictured winning the Racing Post Trophy, is one of three Ballydoyle runners in the Qipco 2,000 Guineas
Martin Lynch
1 of 1
UPDATED 9:17AM, MAY 5 2018

It might seem absurd to suggest as much but there is a hint of routine about the vista that spans out before us at Newmarket.

The first Saturday in May has long heralded the commencement of the Classic series. It's a tradition firmly ensconced in the racing calendar, and that Aidan O’Brien will be represented by a couple of precocious 2,000 Guineas contenders is now nearly as well established a custom.

This time Gustav Klimt and Saxon Warrior spearhead the Ballydoyle challenge in the Qipco-sponsored Group 1. One has had a prep run, the other not. Again, that is not unusual, with Gustav Klimt the one having the benefit of an outing.

Then again, maybe benefit is a poor choice of word. Lest we forget, O’Brien has won the 2,000 Guineas eight times, and every one of that revered octet carved their names into its prestigious roll of honour on their seasonal debut.

Saxon Warrior, last seen creating history when securing O’Brien a record 26th Group 1 of 2017 in the Racing Post Trophy, could extend that sequence.

With Godolphin’s runaway Craven winner Masar, Khalid Abdullah’s frustrating Expert Eye and Hamdan Al Matoum’s unknown quantity Elarqam leading the resistance against the Coolmore leviathan, the sense of familiarity extends to the opposition. Of course, the beauty of sport is its capacity to shatter delusions of predictability.

Same as ever, the Rowley Mile will be charged with a nervous, pent-up energy that will be released in a maelstrom of thundering hooves when the stalls crash open for the Guineas. It’s an occasion we have been anticipating for months.

However, stirring on the other side of the Atlantic Ocean is something for which we have been waiting a lifetime and more.

O’Brien has already had five Kentucky Derby runners, so a speculative tilt at the Run for the Roses isn't an unprecedented departure. This, though, feels different. 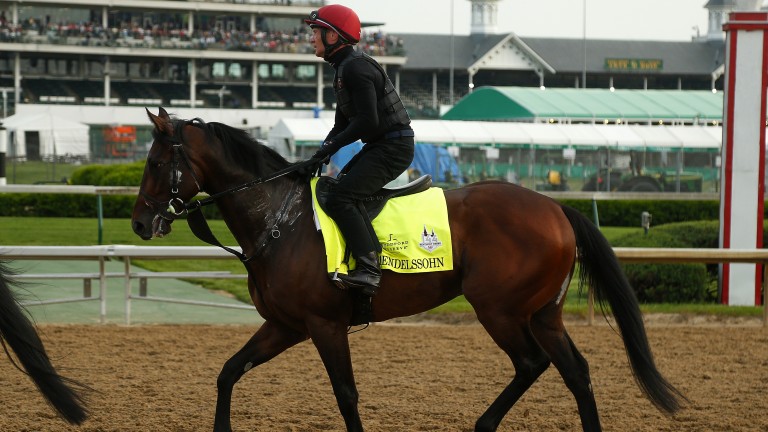 Mendelssohn trots on the track at Churchill Downs ahead of his Kentucky Derby venture
Getty Images/Michael Reeves
In Mendelssohn, O’Brien has unearthed a horse with the potential to bulldoze precedent and become the first European-trained winner of a 144-year-old race synonymous with America’s very sense of identity.

A bit like baseball’s World Series, the Churchill Downs Grade 1 is an extravagant championship sporting event with global aspirations but which has long been the preserve of the locals.

For O’Brien, it is an unconquered outpost he craves, one that would ultimately do far more for his legacy than a ninth 2,000 Guineas.

Should he and Mendelssohn succeed where no fellow Europeans have before, the Ballydoyle genius will be elevated into a pantheon of immortals that transcend the insular confines of their own discipline.

He and Ryan Moore are already racing legends, but at stake now is a whole new frontier for both.

Remember, Moore is unbeaten in an aggregate five outings on Gustav Klimt and Saxon Warrior, yet, since Mendelssohn tore up his UAE Derby opposition, he was always destined for Churchill Downs on May 5. That’s how much this means.

Twenty years after his first Guineas win with King Of Kings, O’Brien also skips Newmarket. On the 50th anniversary of his predecessor Vincent O’Brien’s breakthrough Guineas victory with the Lester Piggott-ridden Sir Ivor, the current Rosegreen incumbent needs just one more top-level win to take his haul in Flat Group and Grade 1s to 300. He is a 20-1 chance with William Hill to this weekend win the Kentucky Derby, 2,000 Guineas and 1,000 Guineas. 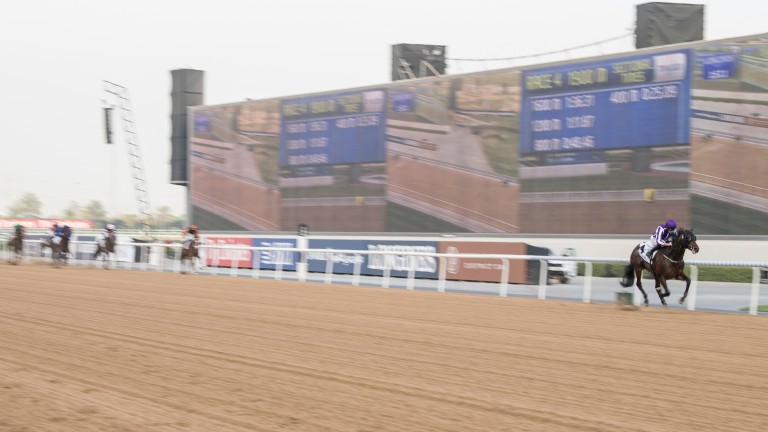 Mendelssohn pulverises his UAE Derby opposition under Ryan Moore
Edward Whitaker
Should the Guineas elude him, Deauville will stake his claim for the landmark 300th top-level winner under Moore in the Turf Classic, and then it will fall to Mendelssohn to vindicate the bold transatlantic voyage.

As O’Brien seeks to be anointed master and commander on the far side of the world, then, it feels like the hand of fate rests on his shoulder.

In the meantime, with Moore absent, Seamie Heffernan and O’Brien’s 19-year-old son Donnacha take over on Gustav Klimt and Saxon Warrior in the 2,000 Guineas.

Qatar Racing, the ownership vehicle of Qipco's Sheikh Fahad Al Thani, is also doubly represented with Roaring Lion and Raid, while Expert Eye’s Greenham conqueror James Garfield has the assistance of the peerless Frankie Dettori when he vies to land a blow for the nascent George Scott establishment. Scott, 29, has yet to win a Group 1, never mind a Classic.

Jim Crowley, the 2016 champion jockey, has a German 1,000 Guineas to his name, but he also covets a breakthrough success in a British Classic.

Crowley has seized every opportunity that has come his way as Sheikh Hamdan's first jockey, but an operation of such rich heritage will invariably be judged on its efficacy in the highest echelon.

The Mark Johnston-trained Elarqam, a son of the indomitable duo Frankel and Attraction, is bred to be an utterly irresistible force of nature. If genes count for anything, the prospect of Crowley’s mount blitzing the field to emulate both of his parents’ Classic heroics on this course is entirely possible.

And as the Flat season sheds its coat and summer finally deigns to lift its head, it is that very concept of possibility that enthrals.

Routine or otherwise, events on both sides of the pond certainly won’t be boring. They might even be a little bit epic.

FIRST PUBLISHED 6:00PM, MAY 4 2018
Stirring on the other side of the Atlantic ocean is something for which we have been waiting a lifetime and more