O'Brien at it again as Mendelssohn impresses under Moore 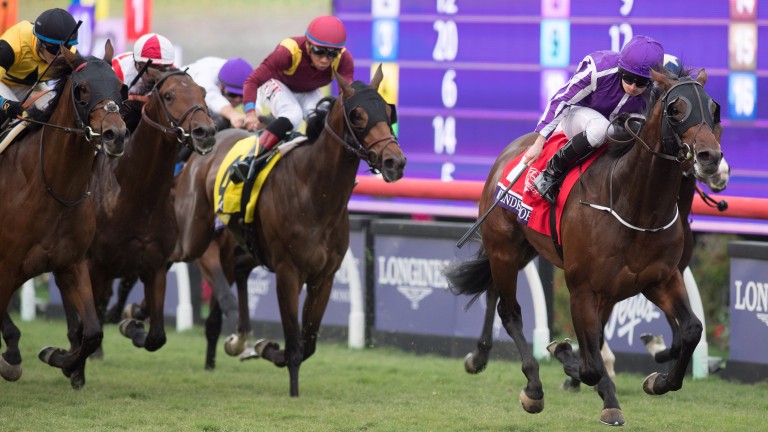 Aidan O'Brien secured his 27th top-level winner of a brilliant 2017 when Mendelssohn produced an impressive display under Ryan Moore in the Breeders' Cup Juvenile Turf at Del Mar on Friday.

It was a fourth win in the race for O'Brien, whose runner fended off Untamed Domain and Voting Control.

Beckford, representing top jumps trainer Gordon Elliott, ran a fine race in fifth, but there was no Breeders' Cup fairytale for George Scott or Richard Spencer, whose runners James Garfield and Rajasinghe finished down the field.

"He's progressed with every run," said O'Brien, who was sending out his 12th winner at the event. "We felt he was still a bit green, but he was learning and getting better all the time. He stepped up again today and it's marvellous.

"It's a big team effort and we're only a small part of it. We're over the moon with this horse."

The juvenile, denied by stablemate US Navy Flag in the Dewhurst, could be aimed at the Kentucky Derby, O'Brien added.

"We knew he was a real American dirt pedigree horse but we didn't want to stop the progression, so that's why we left him on the grass as maybe he wasn't ready for it [the dirt]," said the master trainer, who does run US Navy Flag on the dirt in Saturday's Breeders' Cup Juvenile.

"We had it in our head that maybe we could train Mendelssohn for the Kentucky Derby especially now we have the trials at home."

Moore, who has partnered Wrote, George Vancouver and Hit It A Bomb to victory in the mile heat for O'Brien, added: "He shouldn't have been 50-1 in the Dewhurst. He's a beautiful horse and I really liked him in his maiden, but he's just been a bit backward mentally. When he ran in the Champagne Stakes he knocked himself coming out of the stalls. He's a very talented horse and everything went our way.

"He's a bit slow mentally to grasp what's required. Even today, he travelled round very professionally and was always travelling like the best horse, but when he got his head in front he wasn't quite sure what to do. He's still learning, but he's got a lot of talent."

A son of Scat Daddy owned by Coolmore parnters Derrick Smith, John Magnier and Michael Tabor, Mendelssohn is a half-brother to star mare Beholder, who landed the Breeders' Cup Juvenile Fillies in 2012 before etching her name into the meeting's folklore with wins in the Distaff in 2013 and 2016.

"It's a great moment," said Tabor. "To come to this track is very tough, because it's not what they're used to. Ryan rode a great race, so it means a lot to adapt to these conditions. I was quietly confident because he had such a great position."

A place behind Beckford in sixth was Godolphin's Masar, who did not enjoy a clear run, while Sands Of Mail finished ninth for Richard Fahey, with James Garfield and Rajasinghe tenth and 11th.

Is this Aidan O'Brien's greatest Ascot masterstroke or a total shot to nothing? Cheltenham, Aintree - and now Ascot? De Bromhead adds filly to Coronation mix 'Plenty of options' as one-time Derby hope Highest Ground bounces back 'He shows everything at home - he relaxes, he quickens, he gallops' Royal Ascot two-year-old guide: the horses to watch in the six juvenile races Ryan Moore recruited to ride US-trained hope for King's Stand