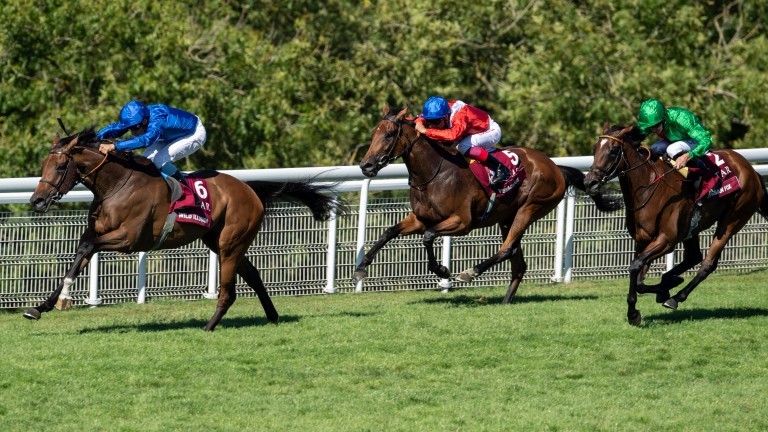 At Glorious Goodwood five years ago a little-known Charlie Appleby arrived having been handed responsibility for one of the world's biggest racing stables, his licence just days old, with some uncertainty as to whether he would keep the job for the long term as replacement for Mahmood Al Zarooni.

He left his mark by winning the Gordon Stakes with Cap O'Rushes and built on that foundation to repay the faith shown in him by Sheikh Mohammed by delivering the ultimate prize this year – a first Derby win in Godolphin silks with Masar.

Back at Goodwood on Thursday he celebrated his anniversary with another Group 1 triumph, his first at the track, from a three-year-old filly when Wild Illusion, who narrowly failed to give the stable an Oaks and Derby double, made all to claim the Qatar Nassau Stakes.

"It's been a stellar season," said Appleby. "I'm very fortunate to be in this position. His Highness Sheikh Mohammed and the royal family have supported me very well and have been very kind to me.

"It's simply my job to try to put these winners on the board at this level. The only problem is we have put ourselves on a pedestal and now have to maintain it."

Appleby is without Masar for the rest of the year but should not be short of other ammunition, with Wild Illusion showing she is a hard filly to peg back when allowed to dictate.

William Buick was never for catching once he began to drive on from a furlong out, holding Urban Fox and Veracious to win by two lengths and a short head on the filly's return to ten furlongs.

"I felt dropping back in trip was going to help and William is great on the front end," said Appleby. "He's given her a lovely tactical ride from the front and used her stamina from half a mile out.

"She's been rock-solid all season, fourth in a Guineas, second in the Oaks, second in the Ribblesdale. I felt this trip would be her forte. I wondered if Epsom and Ascot would tell a bit, but she had a small break and has come back better than I've had her all season." 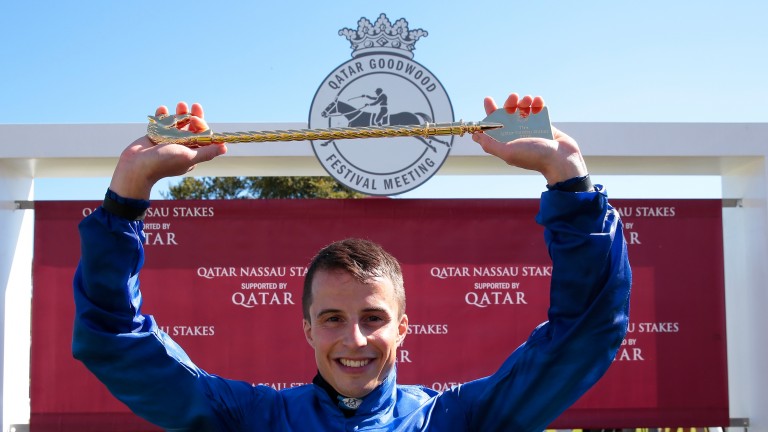 William Buick: celebrates by displaying his golden whip trophy after winning the Nassau
Mark Cranham
Wild Illusion has multiple Group 1 options, including the Darley Yorkshire Oaks and Qatar Prix de l'Arc de Triomphe, but could stay at this trip.

"Over a mile and a half you could question whether she got outstayed in both the Oaks and Ribblesdale," said Appleby. "She has a Group 1 tag as a three-year-old now.

"The job for the rest of the season is to pick the right races, and easier ground will help. She's in the Yorkshire Oaks and Arc, but we could look at the Opera."

Urban Fox beat the Oaks winner Forever Together last time but could not do the same to the Oaks runner-up conceding 8lb weight-for-age.

Favourite Rhododendron, the Lockinge Stakes winner, was one of the first under pressure and finished last of six.

"She ran flat and that's not like her," said Ballydoyle representative Kevin Buckley. "She was disappointing, but we'll get her home and check her out. The pace was slow early, but I'm not using that as an excuse. Ryan [Moore] said she just didn't sparkle."

FIRST PUBLISHED 3:43PM, AUG 2 2018
I felt dropping back in trip was going to help and William is great on the front end