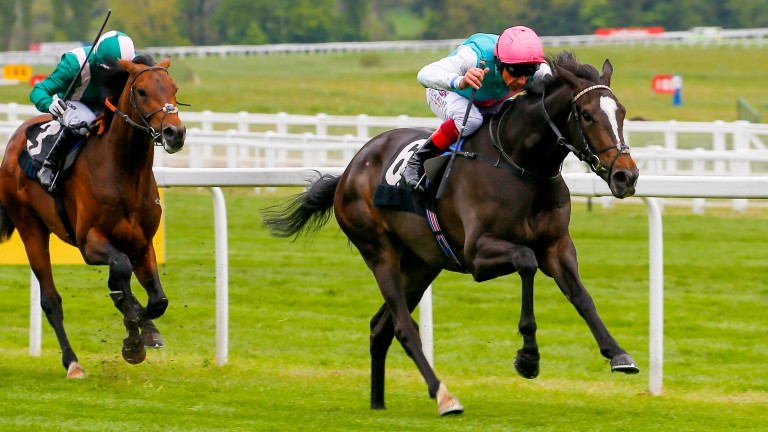 Shutter Speed
John Gosden
The daughter of Dansili resembles former Clarehaven star The Fugue in more than just appearance, as she showed when waltzing up the Al Bahathri Polytrack at second lot under Robert Havlin. Owner Khalid Abdullhah's racing manager Teddy Grimthorpe is also chairman of York, which is handy as the Newbury winner is booked for the Group 3 Tattersalls Musidora Stakes next Wednesday.

Wannabe Friends
Luca Cumani
Due to the relentless dry weather, just about the only green piece of turf in East Anglia is to be found on the watered gallop, of which Cumani is a serial user. This son of Dubawi did what he had threatened to do for some time on the gallops when runner-up at Nottingham on his reappearance and returns to Colwick Park on Saturday in similar shape after impressing in a solo exercise.

Benbatl
Saeed Bin Suroor
Adrian McCarthy has recently swelled the ranks of ex-jockeys at Godolphin Stables but it was another former rider, Chris Catlin, who had the trainer in high spirits after he bounded clear of Top Mission (Kieren Fallon) on the watered gallop. The Craven Stakes third received favourable mentions in the Post's recent stable tour and will step up in trip and class for the Group 2 Betfred Dante at York next Thursday.

El Hayem
Sir Michael Stoute
Stoute could be found on Long Hill, where the uphill mile Polytrack has various uses including working to the bend at the five pole. This strapping son of Invincible Spirit, who ran a great comeback race when fifth in the Spring Cup at Newbury, enjoyed a nice blow in advance of a handicap assignment at Chester on Friday.

Aclaim
Martyn Meade
Meade and son Freddie were watching the action on the watered gallop Aidan O'Brien-style from their Land Rover as they drove parallel to the facility. The smart four-year-old was on top of two stablemates at the close of the exercise at the Bushes and is entered in the Group 1 Al Shaqab Lockinge Stakes at Newbury on Saturday week.

FIRST PUBLISHED 1:10PM, MAY 10 2017
The daughter of Dansili resembles former Clarehaven star The Fugue in more than just appearance