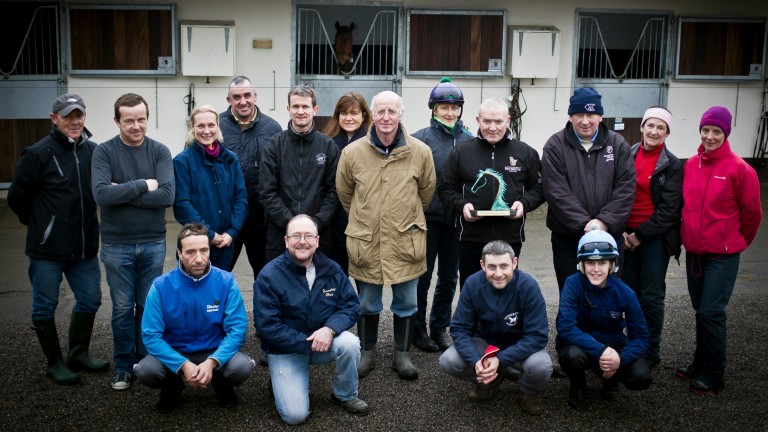 John Oxx and his staff with last year's winner James 'Slim' Neill at the launch of the Godolphin Stud and Stable Staff Awards
Patrick McCann
1 of 1
By Brian Sheerin 6:03PM, JAN 10 2017

Nominations for the Irish Godolphin Stud and Stable Staff Awards opened on Tuesday with some categories amended to more accurately reflect the work of the nominees and to incorporate those working in the breeding sector.

Entries must be submitted by February 10 and the awards ceremony is at Newpark Hotel in Kilkenny on Tuesday, May 9, when a prize fund of €80,000 and specially commissioned trophies will be presented to winners across ten categories.

The ancillary services award has been changed to the racing and breeding support services award, while the newcomer award [stud and stable employees] now allows for three finalists.

A large amount of entries in recent years has led to a separation of the rider/groom award into two stand-alone prizes.

Following the split, the two awards available are the horse care award and the saddle award, with a trophy and €5,000 for each winner along with €3,000 to each winning yard. The two runners-up in each category will also receive €1,000.

There will also be an award for the best racecourse in Ireland chosen by the Irish Stable Staff Association based on a quality programme survey.

Nominations can be made online at www.studandstablestaffawards.ie. The website also includes information on all the award categories, footage and images of previous winners as well as frequently asked questions.

Joe Osborne, managing director of Godolphin Ireland, said: "These awards bring well-deserved recognition to the talented and hard-working men and women who are so important to the continued prosperity of Irish breeding and racing.”