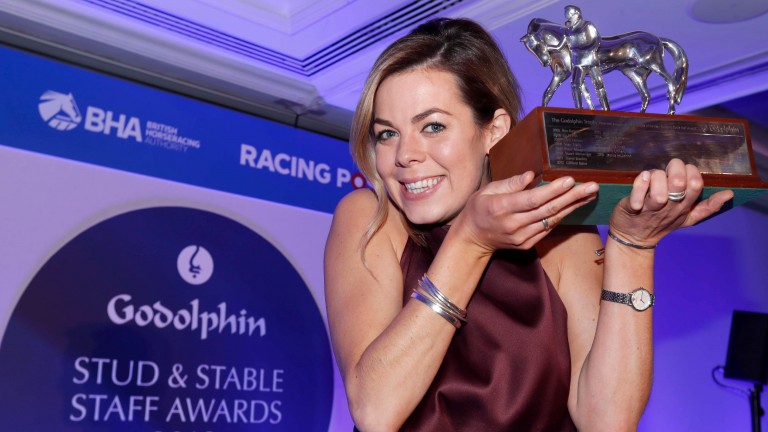 Catriona Bissett won this year's Godolphin Employee of the Year award
Dan Abraham
1 of 1
By Andrew Wilsher 10:00AM, SEP 2 2019

Nominations have opened for the 2020 Godolphin Stud and Stable Staff Awards, with £128,000 in prize-money available to be won.

They are open from Monday, September 2 and can be made by anyone on behalf of someone working in a yard or stud online by clicking here.

The awards, which are now in their 16th year, recognise and reward the skills, commitment and contribution of over 10,000 stud and stable staff members across Great Britain.

BHA chief executive Nick Rust said: "Those who work at yards and studs up and down the country are the backbone of our fantastic racing and breeding industries. These awards highlight some of the people who are so devoted to our horses and give so much of their time to keep the show on the road."

Rishi Persad will be replacing Alice Plunkett on the judging panel, which will once again be chaired by Brough Scott, and will be joined by the likes of Grand National-winning jockey Mick Fitzgerald.

There are four main categories for the awards: Leadership, Dedication, Rider/Groom and Stud Staff. The Rory MacDonald Community Award and David Nicholson Newcomer Award are also up for grabs.

Winners of the main categories will receive £5,000 with another £5,000 being awarded to the winner's yard or stud, while the two runners-up receive £2,000.

The ceremony will take place on Monday, February 24 2020 at the The Underglobe on London’s South Bank.

FIRST PUBLISHED 10:00AM, SEP 2 2019
These awards highlight some of the people who are so devoted to our horses and give so much of their time to keep the show on the road