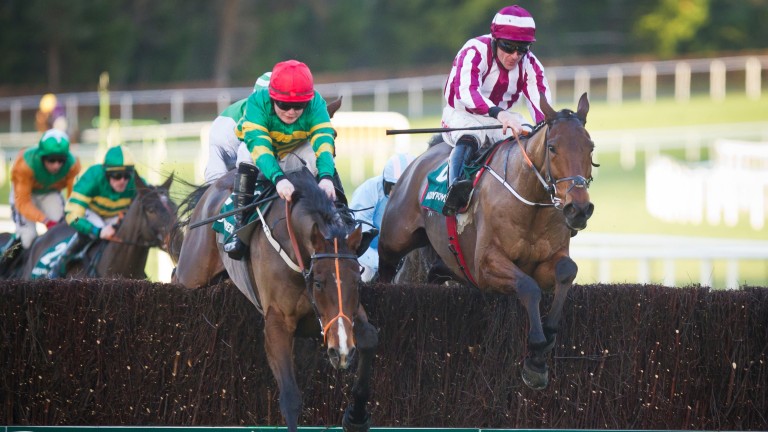 With Willie Mullins delivering a tidal wave of Christmas winners – six more on Tuesday to go with six the day before –Noble Endeavor's victory in the Paddy Power Handicap Chase, with its first prize of €104,500, was warmly welcomed by Gordon Elliott in his efforts to maintain the lead in the Irish trainers' title race.

Elliott admitted as much after Davy Russell had brought Noble Endeavor home three and a half lengths clear of The Crafty Butcher in the three-mile contest.

"We needed that," said Elliott. "We had two winners at Down Royal yesterday and, although the horses have been running well here, we hadn't had a winner until now."

Noble Endeavor, backed down to 6-1 joint-second favourite after 14-1 had been available in the morning, foiled the other gamble of the race The Crafty Butcher, who was backed into 11-4 favourite (from 7).

Elliott was winning the race for the first time at the end of a year in which he also achieved first-time victories in three other major handicap chases – the Galway Plate (Lord Scoundrel), the Kerry National (Wrath Of Titans) and Munster National (Tiger Roll).

Noble Endeavor is owned by property developer and Leopardstown committee member Chris Jones, of whom Elliott said: "Chris has been a great supporter of our yard. He invests a lot of money in the game with different trainers and I'm delighted to have won such a big prize for him, especially here at Leopardstown.

"I'm not sure about short-term plans for Noble Endeavor but the BoyleSports Irish Grand National will be his main target."

Russell said: "He was a bit high over the first couple of fences. He learned a good bit from his run in the Troytown and had come on from that race.

"We used to think he was a bit of a slogger and that he needed really testing ground, but we might have been wrong as he handled the yielding ground really well today."

Ruby Walsh said The Crafty Butcher ran a "blinder", while the runner-up's trainer Willie Mullins said: "He'd have preferred slower ground but he's run a cracking race and there should be a good staying handicap to be won with him."

Oscar Knight, who finished a length and a half behind The Crafty Butcher in third, fared best of JP McManus's six runners.