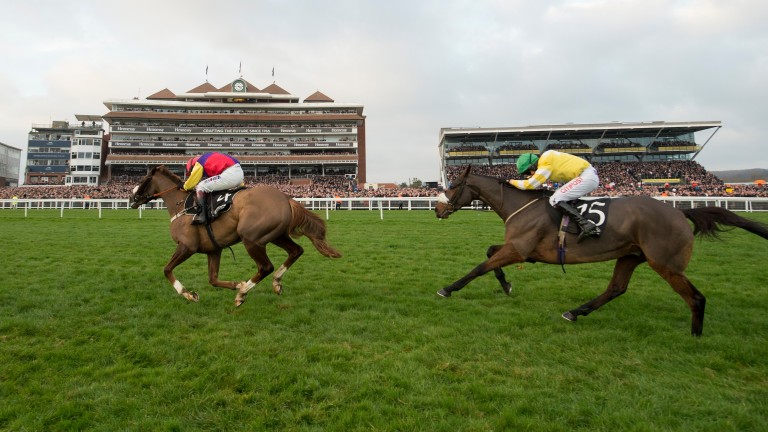 Carole's Destrier chases home Native River in last year's Hennessy and is heading back to Newbury in December
Edward Whitaker
1 of 1
By Lee Mottershead 5:55PM, DEC 7 2016

Team Tizzard looks set to give another present to racing fans this Christmas after it was revealed the Coral Welsh Grand National is likely to feature Hennessy Gold Cup hero Native River mounting a bold bid to become the first horse in a quarter of a century to win under top weight.

One day after Cue Card attempts to defend his 32Red King George VI Chase crown at Kempton, where Thistlecrack could either take him on or pursue Grade 1 honours against fellow novices, Native River is on course to headline Chepstow's biggest card.

Not since Carvill's Hill in 1991 has a horse carried 11st 12lb to success in a race that most recently provided a springboard to Cheltenham Gold Cup glory for Synchronised.

That long-term ambition - one realised in the same campaign by Burrough Hill Lad and Master Oats - is held for Native River, who shares 10-1 favouritism in the sponsors' ante-post list with his nearest Newbury victim, Carole's Destrier.

Native River would be 4lb well in, given he has a penalty of that amount but was raised 8lb to 163 for his victory last month under Richard Johnson, which led to him becoming no bigger than 20-1 for the Gold Cup. He is also co-favourite with some firms at that price for the Randox Health Grand National.

Given the young chaser's rise through the ranks, trainer Colin Tizzard said in the Newbury winner's enclosure Brocade Racing's six-year-old could be "a bit better" than a Welsh National horse. However, with normal winter conditions yet to materialise, and prize-money for Wales's greatest horserace up to £150,000 in value, connections have sweetened on the idea of a Christmas mission.

"He has gone up 8lb for winning the Hennessy and only has a 4lb penalty to carry at Chepstow. The chances are we'll run him and we're certainly aiming that way at the moment. The big weight wouldn't be a problem to him.

"If the race looked like being run in a complete bog it might put us off, but it doesn't look like being that way at the moment."

Tizzard added: "Viconte Du Noyer came out of Aintree a bit too fresh, so we're not sure he faced the fences. We're keeping our options open with him and all the horses entered in the race."

No decision has been made about whether John and Heather Snook's Gold Cup favourite Thistlecrack will try to deny Cue Card back-to-back wins in the King George, for which he is a best-priced 4-1, or instead run earlier in the afternoon in the 32Red Kauto Star Novices' Chase.

Tizzard said: "We need to sit down with John and Heather, but obviously it's a difficult decision we have to make. I would love to be able to give everyone an answer but we don't know ourselves at the moment."

Giving an update on French import Alary and high-class two-miler Fox Norton, Tizzard added: "We want to give Alary every chance to acclimatise and get used to our system. We're very happy with him. He's a gorgeous horse and has settled in really nicely, but there's no firm plan at the moment.

"Fox Norton had quite a nasty overreach when he won at Cheltenham. We're totally on top of it but it has held us up until now, so he'll have probably just the one run before the festival."

Out of the Welsh National is Minella Rocco, who suffered a horrible final-fence fall at Aintree on Saturday when chasing Many Clouds.

The Cheltenham Festival winner had been the sponsor's 12-1 second favourite, but owner J P McManus and racing manager Frank Berry have decided to look elsewhere.

Trainer Jonjo O'Neill's assistant Guy Upton said: "He is absolutely fine. JP and Frank weren't mad on going there as they didn't want him to have a hard race on soft ground at this time of year."

Chepstow boss Phil Bell, however, believes such conditions may not materialise.

He said: "The long-range forecast is mild and dry, but we get nervous looking at it, as the card has been postponed three times in the last six years. We need to get it on this time.

"We're delighted with the quality and quantity of entries. We accept the race had dropped slightly behind the other big chases and we very much want to build it up.

"It looks like the extra money has gone down well and to get Native River, a proper Gold Cup and Grand National contender, would be a real feather in the race's cap."

Given the ridiculously easy nature of Burrough Hill Lad's victory in the 1983 Welsh National it seems surprising Peter O'Sullevan was able to tell BBC viewers bookmakers had only shortened him to 33-1 for the Gold Cup.

The generosity of the layers' reaction seems even more surprising given they had been hit hard by the Jenny Pitman-trained chaser, who was backed into 100-30 favouritism before cruising around Chepstow under John Francome en route to beating Royal Judgement.

Come Gold Cup day, when Phil Tuck took over in the saddle, Burrough Hill Lad was just a 7-2 shot, and he showed why, by seeing off Brown Chamberlin, who Francome partnered due to his retainer with Fred Winter.

Although Cool Ground completed the Chepstow-Cheltenham double, he did not do so in the same season. Master Oats did, but his achievement is also slightly unusual as his Welsh National win came in Berkshire.

In a race transferred to Newbury due to Chepstow's abandonment, Master Oats showed himself to be well ahead of the handicapper, winning off 154 by 20 lengths. On similarly desperate ground he won the Gold Cup for Norman Williamson and Kim Bailey by 15 lengths, also breaking from the norm as the race finished up the Old course home straight.

In 2012 Synchronised became the latest horse to win both contests, although like Cool Ground he landed them in consecutive seasons, on both occasions with Sir Anthony McCoy in the saddle.

FIRST PUBLISHED 1:16PM, DEC 7 2016
The chances are we'll run him and we're certainly aiming that way at the moment. The big weight wouldn't be a problem to him