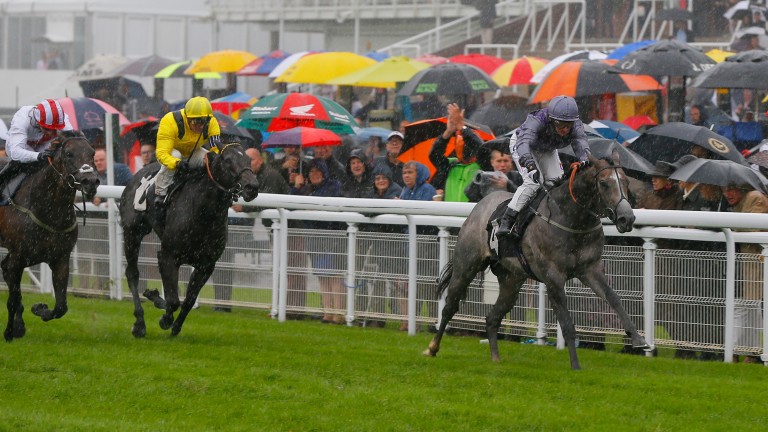 That's what Karl Burke seems to have with his two-year-olds this year, which is particularly good news while stable star Quiet Reflection is on the sidelines.

A week ago last Sunday his filly Unfortunately won the Prix Robert Papin, before the colt Raydiance won a Listed race at Ascot on Saturday.

At Goodwood his dual Sandown Listed winner Havana Grey completed a hat-trick of classy juvenile wins with a cracking effort in the Group 3 Bombay Sapphire Molecomb Stakes, in which regular rider PJ McDonald made a beeline for the stands' rail and brought him home a length and three-quarters clear of favourite Invincible Army.

If there's a downside to the situation, it is that two of the trio will have to go for the same target next.

Burke explained: "Havana Gray will go for the Morny now, along with Unfortunately. It's a shame we have to run the two together, but both horses deserve to go for a Group 1 and that's the obvious choice for him as it's a flat track and just short of six furlongs. It should be interesting."

He added: "If we had found out today that he didn't like the ground the Morny would maybe have been out of the window, but I'd definitely be happy with that now.

"It was a concern, rather than a big worry, but when I walked the track at eight in the morning I couldn't believe how quick it was. It was beautiful ground, with a lovely strip of fresh ground on the inside by the rail and so I said to PJ he must get it all costs. He's got loads of speed and he's got a great turn of foot, as he showed again there."

McDonald said: "He's very tough and the boss was adamant I grabbed that rail, even if it meant going a bit quick early. Once he got it, and once I got after him, he was very, very tough to the line.

"He's a very good horse, and hopefully he will progress and go on to better things than today. When they have such a good attitude it makes the job a whole lot easier, and having won twice before on fast ground he's now come out and won on nearly heavy and really toughed it out."

James Tate, trainer of the runner-up, said: "He ran well. I felt that the draw put us at a disadvantage with the winner. We were racing on the other side and I feel that the better ground is on the stands' side.

"Ideally he doesn't want soft ground and neither does the winner. We think he wants fast ground, but he acted on it okay. Five or six furlongs on a quicker surface would be better."

FIRST PUBLISHED 3:25PM, AUG 2 2017
The boss was adamant I got out and grabbed that rail - he said that was the place to be and he was dead right