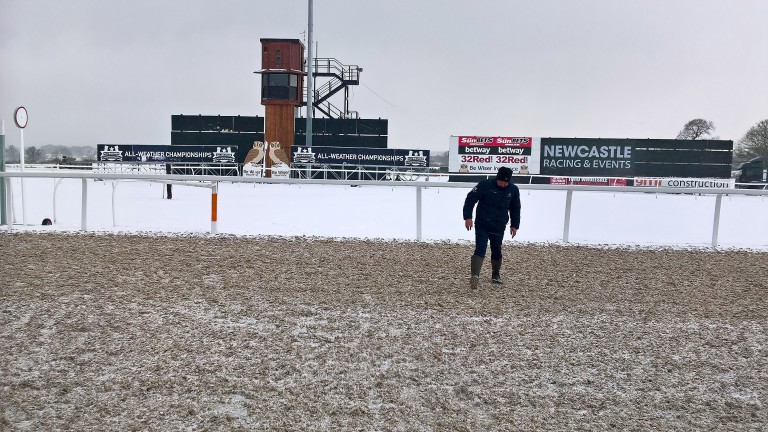 Newcastle's all-weather fixture scheduled for this evening has been cancelled in the interest of safety, it was revealed following a second inspection at 11am.

Speaking after the decision had been announced, raceday clerk of the course Paul Barker said: "There was further snowfall this morning and there was more forecast before racing. We were trying to get all public areas, the services roads and stableyard ready but, with the amount of snow we got and were due, in the interests of safety we had to abandon."

While the Tapeta surface was raceable other factors had to be taken into account.

Barker added: "In the interest of safety for all we decided to abandon. We've had a call from someone to say the A1 is shut at Washington so it was difficult for people travelling, and we've had a raft of non-runners already. The north is pretty much in gridlock at the moment.

"You don't want people stuck out on the roads, you have to be fair. We've looked at the local news and there are quite a few roads shut or operating with only one lane as opposed to three. Then we've also got to think about getting people home tonight safely with the forecast of more snow to come."

Newcastle is due to stage racing tomorrow and the forecast offers some hope.

"We're putting all our efforts into getting tomorrow on," said Barker. "The forecast through the night suggests it will possibly be colder but not as much snow, which is what did for us today. If we don't get the snowfall hopefully we'll be fine."

There is better news at Wolverhampton, with racing expected to go ahead this afternoon. The six-race card commences at 2.15.

Clerk of the course Fergus Cameron said at 8.30am: "We've had a few snow flurries this morning but as we speak I don't anticipate any problems. But that's not to say we're not continuing to monitor.

"We're raceable at the moment. The roads are fine.

"If we get snow then clearly the situation may change, but at the moment we're absolutely fine."

Doncaster's Friday card has been cancelled after four inches of snow fell on the track, while Newbury's Friday fixture is subject to a 4pm inspection today.

An inspection has been called at Chelmsford for 1pm tomorrow to assess the prospects for racing on Friday.

Kelso's high-quality card on Saturday, which was set to feature the totescoop6 Premier Novices' Hurdle, has been cancelled due to snow, but officials are hopeful some or all of the races can be rescheduled.

Navan is due to race on Saturday but HRI tweeted that the course is currently unfit for racing.

Pietro Innocenzi (£) heads the tipping team and the all-weather expert is in his element today thanks to the beast from the east.

Also, there is racing in Hong Kong at Sha Tin today (first race 11.15) and Rob Watson identifies a few horses worth backing.

Find out the latest about the Cheltenham Festival team of Gold Cup-winning trainer Jessica Harrington.

Julian Muscat looks back on the festival career of the evergreen Cue Card (£) and Jon Lees catches up with the latest Nicky Henderson news.

Who doesn't love Cue Card and his enduring presence at the top level?

Harry Whittington updates viewers with his hopes for the Cheltenham Festival

Patrick Mullins also has updates on his father Willie's team for Cheltenham.

The FA Cup replay at Wembley between Spurs and Rochdale is not expected to have another twist with Dan Childs having a first goalscorer suggestion.

Steve Palmer has this week's golf tips with an 80-1 chance in South Africa.

Not sure if Jeremy Corbyn will ever consent to have a horse named after him in his lifetime but Newcastle (if getting the go-ahead) will play host to the belated debut of one named Keir Hardie, the founding father of the Labour Party. The betting overnight suggests a landslide victory.

FIRST PUBLISHED 8:41AM, FEB 28 2018
Tomorrow's meeting at Clonmel has been cancelled due to an adverse weather forecast and hazardous driving conditions