No place like home as Pinfield saddles first British runner 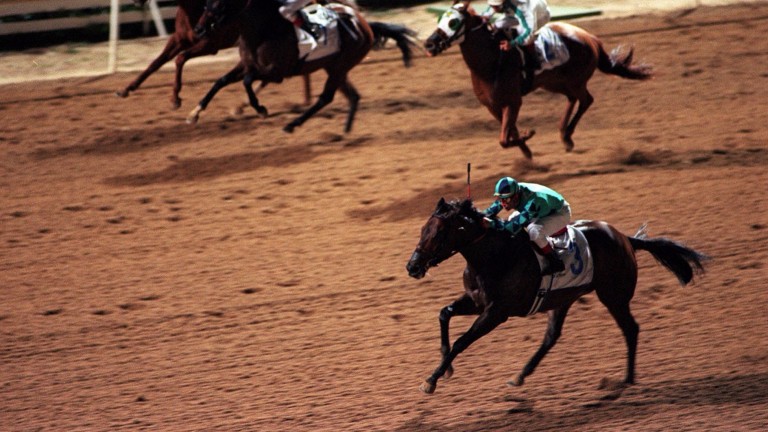 Former globetrotter Tim Pinfield is back in Britain after nearly two decades on his travels and saddles his first runner from his new base in Upper Lambourn in the finale at Bath on Saturday.

The 51-year-old is best known for preparing Big Jag to win the Group 1 Golden Shaheen on World Cup night in Dubai in 2000 when he was based in the USA.

Since then, the former Josh Gifford conditional rider has spent time in Singapore and Macau, where he enjoyed much success but not so much the "chicken's feet and noodles" of the culinary culture.

Despite his wanderlust, Pinfield had always intended to return to his home country and, to that end, a few years ago he bought the 35-box Flemington Stables. Since then he has spent time rebuilding the yard while running it as a pre-training facility for his Asian clients, and is now ready to take the next step.

'It's very competitive out there'

He said on Friday: "I trained in California for about ten years and got lucky with Big Jag, who took me around the world. He was a top horse and I don't think the track record he posted at Nad El Sheba was ever beaten. That helped my career and I went to Singapore in 2002 and had six years there before training in Macau for a spell."

On that episode of his life, Pinfield added: "You either love the Asian circuit or you hate it. It's very competitive out there and it's good to finally get off the merry-go-round as well as the chicken's feet and noodles."

On the prospects of hitting the ground running with the 52-rated Satellite Express in the 5.20 at Bath, he added: "This filly has been ready to run for a while and she's been down to Lingfield for a trial already.

"Hopefully we've covered all bases but going to the sports is a different ball game to working them at home. Fingers crossed she can run well as we have another 21 to run."

FIRST PUBLISHED 6:00PM, JUN 16 2017
You either love the Asian circuit or you hate it. It's very competitive out there and it's good to finally get off the merry go round