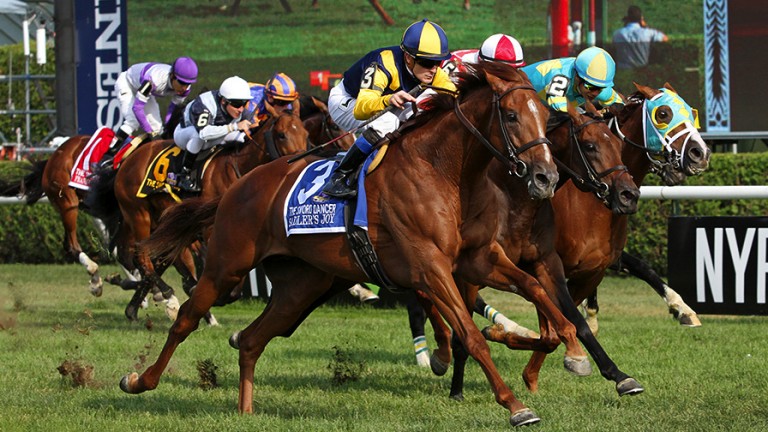 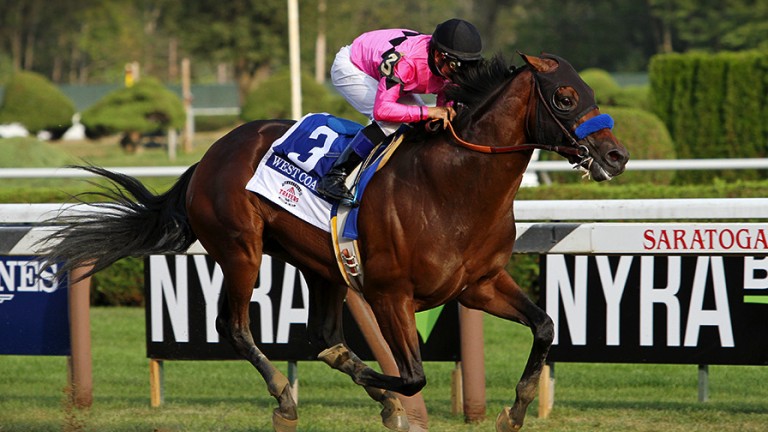 Sadler's Joy (Julien Leparoux, near) sprints home to claim the Sword Dancer, in which Idaho faded in the stretch
Jessie Holmes/EquiSport
1 of 2
By Andrew Dietz UPDATED 7:57PM, AUG 27 2017

Sadler's Joy (Tom Albertrani/Julien Leparoux) came with a scintillating late run to claim the Sword Dancer as the Aidan O'Brien-trained Idaho faded away in the closing stages to finish sixth of seven in the Grade 1 contest.

The Irish contender, a brother of renowned globetrotter Highland Reel, was sent off favourite and duelled at the head of affairs with Frank Conversation for much of the race, but the exertions took their toll down the home straight.

As the front two started to backtrack inside the final furlong, the pack closed up but nothing could live with the finishing kick of Sadler's Joy (7-1), who blasted home from the rear in the hands of Julien Leparoux.

After third-placed finishes in two Grade 1s – the Man o' War and Woodford Reserve Manhattan – earlier in the season, Sadler's Joy relished the return to 1m4f to secure a spot in the Breeders' Cup Turf with the race part of the 'win and you're in' series.

"He (Leparoux) has ridden him well every time," said winning trainer Tom Albertrani. "We had some misfortune, maybe, in the Man o' War when we got boxed in the whole race, but that's racing luck. Today he showed that kick. This horse has that tremendous kick and he did it today."

Twelve months after Arrogate announced himself on the highest stage in the Travers, Bob Baffert and Mike Smith were back in the winner's enclosure after West Coast produced a dominant wire-to-wire victory in the 148th running of Saratoga's signature race.

For the first time since 1982, the three winners of Triple Crown races came together but it was left to West Coast to confirm his potential stepping up in grade by registering his fourth straight success.

Comparisons with Arrogate, who lowered the track record a year ago, were drawn as West Coast crossed the line three and a quarter lengths to the good of Gunnevera, and even the most sceptical of observers has to admit there are some similarities beyond the same all-star trainer and jockey combination.

Like Arrogate, West Coast was unraced as a juvenile and kept away from the Triple Crown contests before making his breakthrough in the Travers.

Having grabbed an early lead, Smith dictated the pace and despite being hassled at the top of the straight by Gunnevera and third-placed Irap, West Coast hit top gear to stretch out his advantage in the final half-furlong.

"He was a happy horse all the way around there," Smith said. "There was a time or two when they came to me, but he just put them away."

West Coast potentially set himself up for a crack at Arrogate, who has lost some of his aura following two recent defeats, in the Breeder's Cup Classic, for which his odds range from 9-2 to 12-1.

As well as landing the main event with West Coast, Bob Baffert and Mike Smith teamed up with Breeders' Cup Sprint winner Drefong, who produced a sensational performance.

The four-year-old had questions to answer after parting company with Smith on his only previous outing this term, but he answered them in no uncertain terms, making every yard from the outside post and powering away to score by four lengths in a good time.

In recording her third Grade 1 success, Forever Unbridled (Dallas Stewart/Joel Rosario) inflicted only the second defeat of Songbird's brilliant career as she ran down the front-running filly inside the final furlong for a neck victory.

Having finished only a half-length adrift in the Haskell on his most recent outing, 2-1 favourite Practical Joke (Chad Brown/Joel Rosario) showed that one-turn races are his true metier.

Runner-up Takaful set sizzling fractions before being claimed in the stretch as the winner took his record in one-turn races to five-from-five. The Breeders' Cup Dirt Mile is the probable target for the winner – but the race is around two turns this year at Del Mar.

Sent off odds-on, the wonderful Lady Eli (Chad Brown/Irad Ortiz) surged home for a decisive victory over Dickinson to take her career record to ten wins from 13 starts.

"I have so much confidence in her," said Brown. "You never really know until they cross the wire, but when she tipped out I know how devastating her turn of foot is, and I felt confident she would get it done. She really is a horse of a lifetime. Everything she's overcome. Just her natural abilities are remarkable, and she's just a rare, rare horse."

By The Moon (Michelle Nevin/Rajiv Maragh) recorded the second Grade 1 success of her career three years after the first as she earned a fees-paid berth in the Breeders' Cup Filly & Mare Sprint as part of the 'win and you're in' challenge.

The five-year-old, who won the Frizette as a juvenile in 2014, benefited from a good ride as Maragh unexpectedly took the lead and was allowed to set soft fractions before sprinting home.