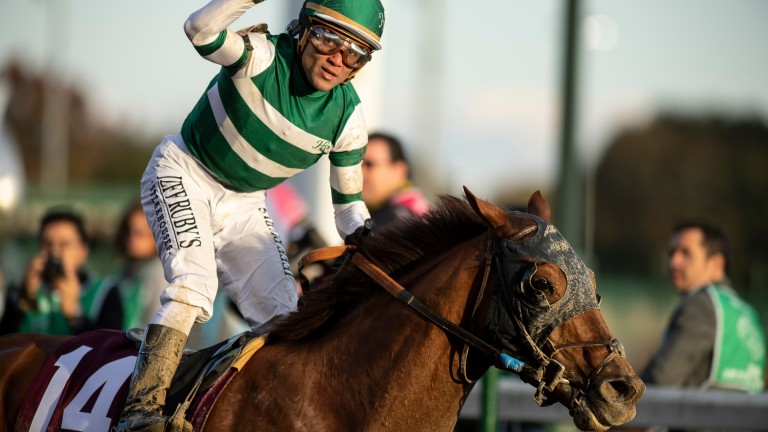 It might have ended in frustratingly familiar style for the European contingent, but Accelerate went some way to advancing his claims for the US Horse of the Year title with a crushing demolition of his rivals in the Breeders' Cup Classic at Churchill Downs.

With the three-year-old Triple Crown champion Justify having retired after not competing outside his own age group, this was another chance for John Sadler's massively improved five-year-old to leave an indelible impression on the senior ranks.

The 9-2 shot took that opportunity in grand style with a devastating performance of class, courage and conviction under Joel Rosario, who was winning his first Classic after a brace in the Juvenile and Juvenile Fillies on Friday.

"That was about as good as it gets," beamed Rosario. "That horse is simply unbelievable. It was a great performance. He has so much heart." 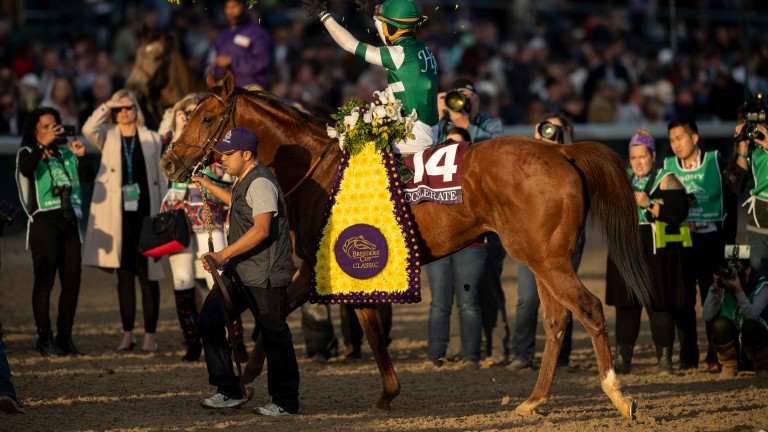 Sadler has trained for 40 years, but his 44 previous Breeders' Cup runners all failed to win. However, Accelerate had already taken him to dizzy heights this year.

"I'm thrilled, no doubt," said a serene Sadler, whose Catapult had been done on the line by Expert Eye in the Mile.

"I mean, this is what I do every day, every year for my whole career, so to really get the big one, I couldn't ask for a better day.

"We're prepared for the worst and hope for the best. I mean, horseracing is a great sport, and this horse has been good.

"He's been the best horse in this division all year, so I thought if we had a good trip, he'd be tough." 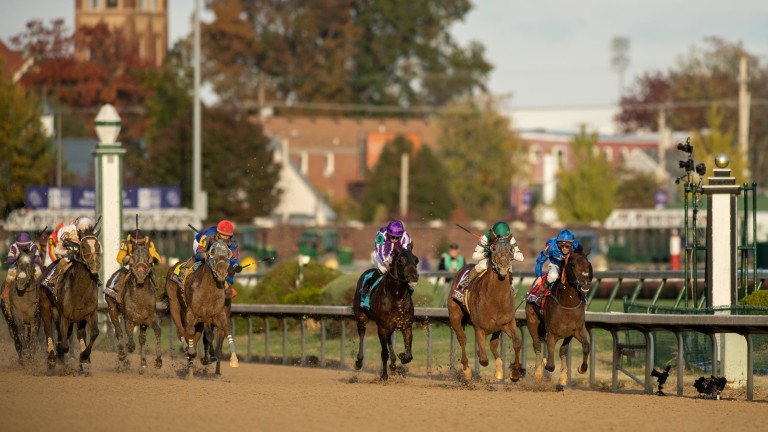 Tough he was. Third in the Mile in 2016 and beaten nearly 15 lengths in it 12 months ago, the Hronis Racing-owned son of Lookin At Lucky has made giant strides since February.

Four wins at the highest level had come in the Santa Anita Handicap, the same venue's Gold Cup, the Pacific Classic at Del Mar and the Awesome Again Stakes back at Santa Anita.

As the setting Louisville sun made for a suitably majestic background, Accelerate, who was settled wide in mid-division early on, capped his sensational year with a lung-bursting shift to wear down the front-running Mendelssohn at the two-furlong pole.

Godolphin’s Thunder Snow was bang there in between, but couldn't live with Accelerate, who ground his way home to withstand the challenge of the closing Gunnevera by a length.

Thunder Snow kept on for third under Christophe Soumillon, whose whip use made for a rather unedifying sight, while Mendelssohn lost fourth to Yoshida at the death.

Roaring Lion suffered an early bump and never looked happy getting hit with shovel-loads of sand. He eventually trailed home a long last, and will now likely be retired to stud.

Asked to rationalise Accelerate's belated and sustained progression, Sadler added: "I think what has helped him is that he came back at five. Me and Kosta [Hronis, owner] have a philosophy; if at the end of the year we evaluate the horses and they're in good shape and we think they're going to have another good year, then we continue to race them because that's what we do and that's what we enjoy.

"This year, at five, he seems like he's more ready to go those long distances. He has a great constitution because he needs a lot of training to run in those races. So it's a tribute to him at five."

Sadler suggested Accelerate would journey to nearby Lane's End Farm on Sunday, where he would be viewed as a stallion for the week before a decision is made about tackling the $16 million Pegasus World Cup at Gulfstream Park in January.

Should he look to further enhance his legacy there, he may well encounter Mendelssohn again. Last year's Juvenile Turf winner broke hard and set strong fractions under Ryan Moore, but simply had no more to give at the business end.

Aidan O'Brien's quest for a breakthrough Classic victory goes on, but he was not despondent. "We're delighted with him, and it was all older horses that beat him," he said of the three-year-old.

"We've always thought he was a fast horse and that has always been Ryan's gut feeling as well, so it might be that around nine furlongs would suit him better than ten.

"We'll take him home and if he is okay we'll train him for the Pegasus."

Of Roaring Lion, John Gosden said: "He broke half a length up and then got absolutely cleaned. He got covered in the dirt then and found it impossible, but, when you get hit out of the gate, that is to be expected."

FIRST PUBLISHED 9:59PM, NOV 3 2018
This is what I do every day, every year for my whole career, so to really get the big one, I couldn't ask for a better day