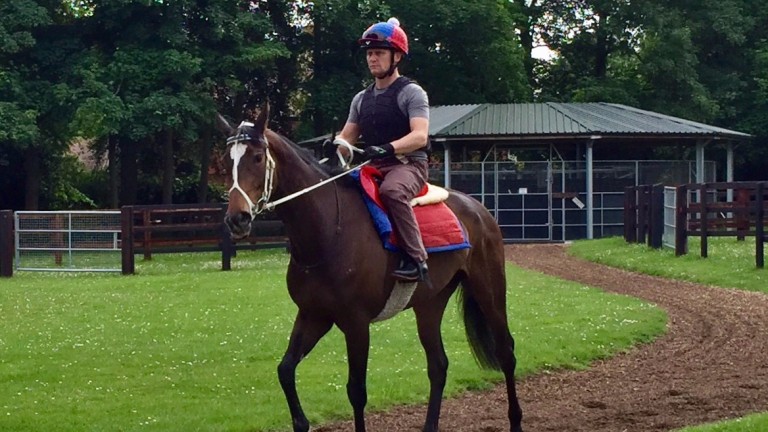 Opinions are divided at Abington Place in Newmarket as to whether Jane Chapple-Hyam's first runner in an Epsom Classic, 1,000-1 outsider Diore Lia, will actually finish last in the Investec Derby on June 3.

Nicknamed 'Diore The Explorer', the daughter of Yeats will become the first filly since Cape Verdi in 1998 to run in the Classic and is quoted at 1-8 with Paddy Power to bring up the rear.

Diore Lia, who has a Racing Post Rating of just 52, has beaten only four horses in her two starts but is running for charity as her breeder Richard Aylward is donating any winnings to Great Ormond Street Children's Hospital, which has already set up a justgiving.com page.

Connections are still hoping to book Melbourne Cup winning jockey Michelle Payne for the ride, which would be her first at Epsom.

The prospect of taking on the ranks of Godolphin and Ballydoyle on the Downs has convinced Chapple-Hyam she will be bringing up the rear but Diore Lia's regular work-rider is not so sure.

The trainer said: "Look, just give me the wooden spoon now! Whatever happens I've done my best and while I know she's not up to this grade, the owner insisted that I train the horse for the Derby and that's what I'm doing.

"The owners are doing this for charity – it's a nice gesture and hopefully they can raise some money for a good cause."

After finishing eighth of nine on her debut at Epsom last month, Diore Lia fared better when fifth of nine at Lingfield.

Chapple-Hyam added: "I've run her over a mile at Epsom and then a mile and three at Lingfield so she has plenty of experience of bends and cambers and I even gave her a gallop after racing at Newmarket last Saturday. That was a positive exercise as she stretched out nicely out of the Dip and the jockey certainly wasn't scrubbing her along."

Despite the 1-8 quote, Diore Lia's regular work-rider Jamie Scotland does not think the odds-on punters will collect. He said: "She won't finish last. If you ran her in a Class 5 maiden now she'd win it as she's improving all the time. She'll be ridden from behind and hopefully should pass a few up the straight."

Paddy Power spokesman Paul Binfield, said: "It's quite a seismic shift from finishing fifth in a Lingfield maiden, beaten nearly 20 lengths, to running in the Derby. But let's not forget that Jane Chapple-Hyam did win the Ebor with 100-1 outsider Mudawin in 2006."

Aidan O'Brien is pondering running seven in the Derby, while Godolphin have four live chances, raising the possibility that horses may have to be eliminated from the race, which has a safety limit of 20, with two reserves.

But Epsom clerk of the course Andrew Cooper thinks the actual number running will be 14 or 15.

He said: "I would imagine with perhaps six from Aidan O'Brien and maybe five from Godolphin plus ones and two's we'll have a field size of around 14 or 15. I certainly don't think we'll have a maximum of 20."

The biggest Derby field in the last decade is 16. The average in that period is 13.4 runners.

FIRST PUBLISHED 3:41PM, MAY 22 2017
Look, just give me the wooden spoon now! Whatever happens I've done my best