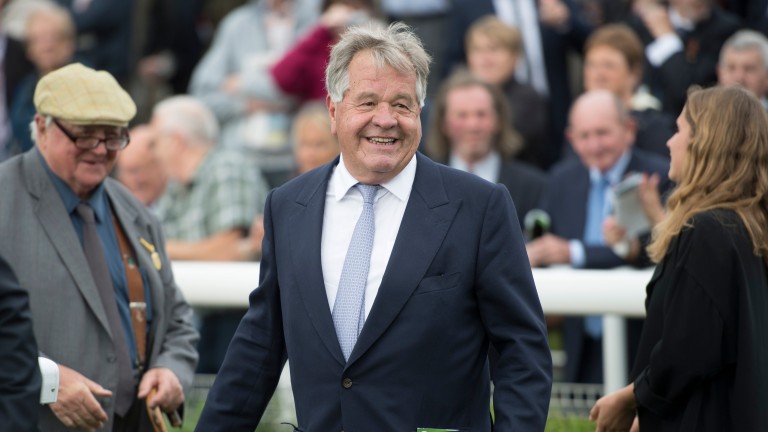 Sir Michael Stoute was able to celebrate a Group winner on his birthday courtesy of Intimation in the Prix de Flore
Edward Whitaker
1 of 1
By Scott Burton UPDATED 6:53PM, OCT 22 2017

Sir Michael Stoute was able to mark his 72nd birthday on Sunday by winning the Group 3 Prix de Flore at Saint-Cloud with Intimation, a mare who was reappearing just eight days after running down the field in the Darley Stakes at Newmarket.

While the ground was officially given as good to soft in the morning, several sharp showers may have turned conditions more favourable for Cheveley Park's well-bred daughter of Dubawi and Coronation Stakes runner-up Infallible, who found plenty for Mickael Barzalona.

Intimation's success capped a fine weekend for Cheveley Park and she is likely to join Saturday's QEII Stakes heroine Persuasive in heading to the breeding shed after gaining her Group success at the age of five on what was only her 12th start.

Asked about the decision to turn Intimation out again so soon after her Newmarket run, Cheveley Park's Chris Richardson said: "We just feel that the ground is so important for her and she needs to get her toe in. It was too fast for her before, so this looked a good opportunity.

"I'll obviously have to confer with Mr and Mrs Thompson but I would expect that she'll be off to the paddocks now. We hoped we were in with a good chance of being in the first three and Mickael gave her a great ride."

Intimation scored by half a length from German raider Son Macia but the other two British-trained runners, Pleasant Surprise and Company Asset, trailed home ninth and last in the 11-runner field.

For all the best international coverage go to racingpost.com

FIRST PUBLISHED 6:51PM, OCT 22 2017
We hoped that we were in with a good chance of being in the first three and Mickael gave her a great ride

Stoute excited about Royal Ascot - but has Noon Star warning for punters Foot abscess forces Royal Ascot favourite Bay Bridge out of King Edward VII Shadwell 'trimming' continues with more than 100 horses catalogued for July sale 'Plenty of options' as one-time Derby hope Highest Ground bounces back 'Now is the time to bet like men' - how Shergar made a lot of people very rich Britain v Australia: the perfect subject matter for Punch and Moody Show