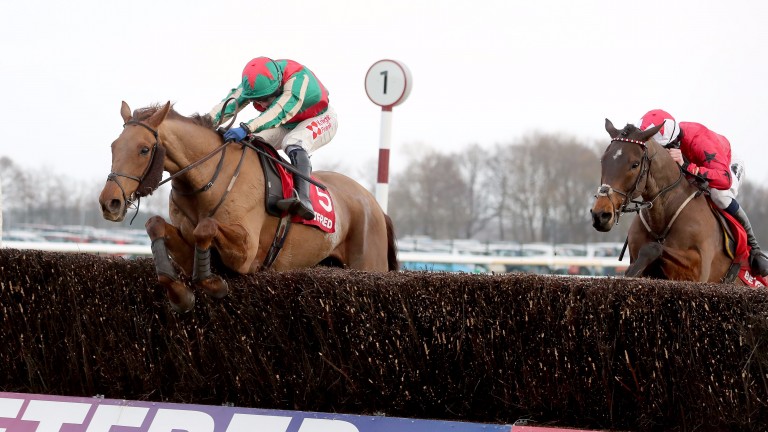 Vieux Lion Rouge, a general 7-1 chance to repeat his victory from last year in Saturday's Betfred Grand National Trial, was a notable absentee as a field of nine were declared for the Haydock feature.

Earlier in the week, the nine-year-old's trainer David Pipe had been weighing up a choice of weekend options and last season's Randox Health Grand National sixth looks set to take up his engagement in the Keltbray Swinley Chase at Ascot instead.

On his weekly website blog, Pipe wrote: "He did not quite run to form last time out in the Becher Chase in December but we've freshened him up since then and he is in good form at home ahead of the weekend."

Pipe and Vieux Lion Rouge's joint-owner Caroline Tisdall will still be represented in the race with the progressive Daklondike.

The rest of the key contenders for the 3m4½f contest stood their ground with ante-post Grand National favourite Blaklion, who was second 12 months ago, joined by Peter Marsh Chase winner The Dutchman as well as Three Faces West and Wild West Wind.

Seven of the best in Ascot Chase

With no defectors at the final declaration stage, a stellar field of seven is set to go to post for the Betfair Ascot Chase on Saturday.

Leading trio Top Notch, Waiting Patiently and Coney Island feature alongside Cue Card, who will be reunited with Paddy Brennan as he targets an historic third victory in the race. The line-up is completed by Frodon, Speredek and Traffic Fluide.

Betfair spokesman Barry Orr said: "It's a quality field for Saturday and Top Notch, who has headed the betting since Monday, still leads the way at 7-4.

"Of the market principals Coney Island has probably been the weakest but, as with a race with such strength in depth, the betting could change very quickly."