Nicholls: Silviniaco Conti 'will have to be at the top of his game' 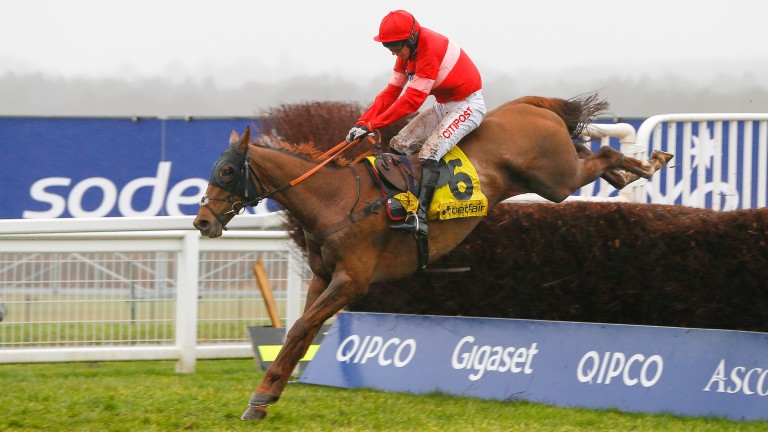 Silviniaco Conti: bids to give Paul Nicholls a fifth victory in the JNWine Chase at Down Royal
Mark Cranham
1 of 1
By Tony O'Hehir 6:00PM, NOV 4 2016

Silviniaco Conti heads an impressive cast for the first Grade 1 chase of the season, in which the seven-time Grade 1-winning chaser will be attempting to give Paul Nicholls a fifth victory in the race.

First run as a Grade 1 in 2002, the roll of honour for Northern Ireland’s biggest race includes Kauto Star and Beef Or Salmon, both of whom were dual winners, and Don Cossack, who was successful a year ago before going on to Cheltenham Gold Cup glory.

Silviniaco Conti, who has not won on his seasonal reappearance since landing the Charlie Hall at Wetherby four years ago, faces six rivals.

He will be bidding to deny, in particular, Gigginstown House Stud, who are represented by Don Poli, Valseur Lido and this year's Galway Plate winner Lord Scoundrel.

Gigginstown have won the race for the past three years, and four times in all. Ruby Walsh is the only rider involved today's renewal to have won the contest and partners dual Grade 1 winner Valseur Lido, who recently joined Henry de Bromhead.

Walsh is partnering the seven-year-old for the third time, having ridden him to a Grade 1 success at the 2015 Punchestown festival and, more recently, at Leopardstown in February, when they went their separate ways at the final fence when leading in the Irish Gold Cup.

Don Poli, a three-time Grade 1 winner over fences for Willie Mullins and third in the Cheltenham Gold Cup in March, will be having his first run for Gordon Elliott and will have Barry Geraghty on board for the first time.

Monksland, successful on his reappearance at Galway last month, steps up in class for Noel Meade, while Kim Bailey is represented by The Last Samuri, who was last seen in action in April when a fine second to Rule The World in the Grand National.

Gordon Elliott, trainer of Don Poli and Lord Scoundrel
We're looking forward to getting Don Poli started. He seems in good enough form but mightn't be fit enough. We're trying cheekpieces as he worked in them during the week. He's bound to come on a good bit from the race. Lord Scoundrel had a good summer, winning the Galway Plate. He has plenty on his plate in this race and we're just hoping he can pick up some prize-money.

Noel Meade, trainer of Monksland
He's very well. He was just ready to start his season when he won at Galway last month and has come on nicely since. It's a big ask, but we're happy to let him take his chance.

Henry de Bromhead, trainer of Sadler's Risk and Valseur Lido
Valseur Lido seems in good form and has been working nicely since we got him. It's his first run of the season and we're hoping for a good run. Sadler's Risk has been in good form since his win at Punchestown last month. This will be a step up in class but he'll appreciate the good ground.

Paul Nicholls, trainer of Silviniaco Conti
It's a hot race and although he’s in good shape he’ll have to be at the top of his game. He’s done plenty of work and I’m looking forward to running him.

Kim Bailey, trainer of The Last Samuri
It's a big test and to finish in the first three would be great. He's summered well and seems in a good place. He's in a difficult situation as he's not very big so doesn't want to be carrying big weights in handicaps, and his season is geared to one race next April – back at Aintree.

FIRST PUBLISHED 6:00PM, NOV 4 2016
Valseur Lido seems in good form and has been working nicely since we got him