Nicholls looking for a good round from Just A Par 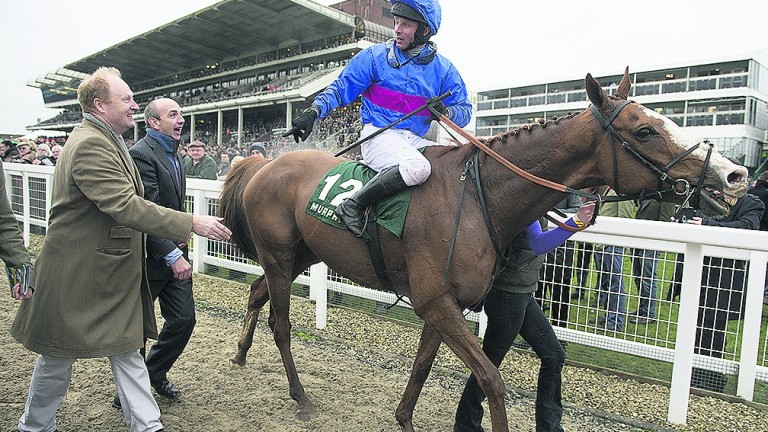 The winner of the Edinburgh National will achieve something no horse has done before as it is the first race to be run over four miles at Musselburgh.

The new National worth £40,000 has achieved its aim of attracting Aintree types as Alvarado boasts fourth place finishes in consecutive years behind Pineau De Re and then Many Clouds in 2015.

The 12-year-old, an Aintree entry again this year and one of the ante-post favourites, has history with the Scottish track as well. When trained by Howard Johnson for the Wylies he won his bumper there just over eight years ago.

The new race has enticed the two farthest away trainers in Harry Fry and Victor Dartnall, who are sending horses on the 400-mile trip for the first time.

Another of the long-distance travellers Paul Nicholls, trainer of top weight Just A Par, has made his visits pay with three winners from ten runners.

Paul Nicholls, trainer of Just A Par
He has run well in long-distance races as his performances in the Bet365 Gold Cup show and four miles right-handed seems to suit him.

Brian Ellison, trainer of Five In A Row
He came back with an abscess in his foot last time but is fine now and working well. He looks like he will get the trip and the plan to run here is to then go for the Scottish National.

Fergal O’Brien, trainer of Alvarado
He got kicked when he fell in the Becher so had some time off. He seems in good form and I am hoping for a good run. He will like the ground but I am not sure about the track for him.

Nick Kent, trainer of Gonalston Cloud
It looks like he will stay and hopefully he will get the trip. He ran at Haydock and Bangor on heavy ground and he just hated it – he couldn't get his feet up. The ground will help him because he jumps much better on good ground.

Victor Dartnall, trainer of Dancing Shadow
I am looking forward to running him over four miles – it should really suit him. He only gets going after he has run three miles. The ground should suit him as well.

Charlie Longsdon, trainer of Azure Fly
He has been knocking on the door and there is no reason why he won’t be again. Nicer ground should suit him and this race has been the plan since his last run.

Donald McCain, trainer of Valleyofmilan
He won well last time and is off a good weight. I am not sure whether he will get the longer trip but the ground will suit him as he doesn’t want it too soft.

Lucinda Russell, trainer of Itstimeforapint and Present Lodger
Itstimeforapint has been a superstar, really improving with every race. He has run about 11 miles in races in the last six weeks and has come out fresh from every race. He certainly has a chance. This trip is a bit unknown for Present Lodger but good ground will really help him and his light weight will also be a benefit.

Punters will be bidding to land the Scoop6 for the fourth consecutive week on Saturday when the six legs come from Sandown and Musselburgh.

Players are advised that a new rule change means that, in the event one or more legs of the Scoop6 are abandoned, only the money invested in the pool that day – and not any from previous rollovers – will be up for grabs.

FIRST PUBLISHED 6:00PM, FEB 3 2017
I'm looking forward to running him over four miles - it should really suit him. He only gets going after he's run three miles