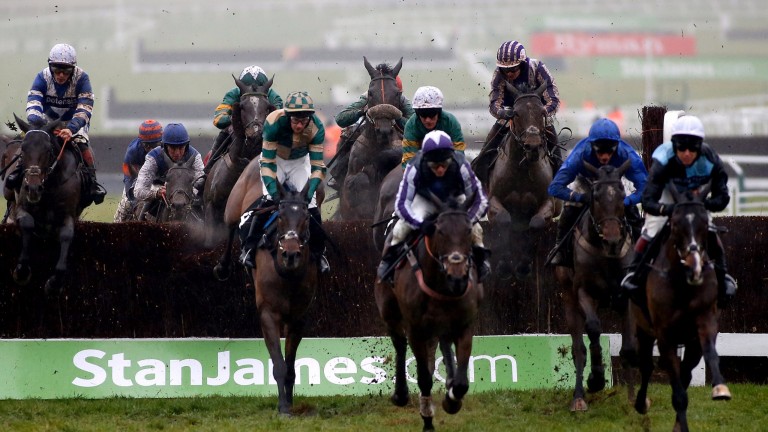 Frodon, youngest in the field at four, ground out a thrilling win in the Caspian Caviar Gold Cup to give Paul Nicholls and stable jockey Sam Twiston-Davies another big-race win at Cheltenham on Saturday.

Twiston-Davies, who returned to the saddle only at the start of the month after damaging ribs and his spleen in a fall, drove Frodon ahead after jumping the last in second and held the late thrust of Aso.

Nicholls, winning the race for the fourth time in the last ten years, was repeating his feat of saddling a four-year-old to win this ultra-competitive handicap chase, having done so with Unioniste in 2012.

Nicholls said: “I thought Frodon was awfully unlucky the last day, when he made a mistake at the wrong time.

“We had a month to get him right and the rain suited him. I thought he'd go close today. He's a good horse and jumps well. It's great for Sam and that will do his confidence the world of good.”

With the rain bucketing down, last year's winner Village Vic made this Grade 3 over two miles five furlongs on the New course a stern test, but he was passed around the home bend as Kylemore Lough made his bid for glory.

Frodon, previously tenth at this course in the BetVictor Gold Cup, loomed up with his stablemate Bouvreuil between the last two, and it was Frodon who responded for Twiston-Davies to be first past Kylemore Lough on the run-in.

As Kylemore Lough weakened into fifth, Aso stayed on, but he was beaten a length and a half, with Village Vic rallying gamely for third, beaten another head and just in front of 20-1 shot Quite By Chance, who kept on for fourth.

Aso's trainer Venetia Williams was left to rue what might have been as she said: "He met the second-last wrong and had to fiddle it. That put him back but he has done nothing wrong.

"Charlie [Deutsch] needs one winner to cut his claim from 5lb and we hoped this might be the one."

Village Vic, co-oldest in the field at the age of nine, drew gasps as he flew fence after fence for Richard Johnson and at the top of the hill there were thoughts he could repeat last year's win despite carrying top weight of 11st 12lb, compared to 10st a year ago.

Village Vic was swallowed up on the home turn as five swept by, but he rallied and was saluted by Johnson.

"He has run another great race," said the champion jockey. "The handicapper knows all about him now but that was still a hell of a good run under a big weight. He never gives up - and for a jockey that's the most important thing."

Buywise, who has developed a cult following for invariably running well in big handicaps at Cheltenham and finishing his race strongly, did not enjoy too much luck in running and managed only seventh, beaten just over 18 lengths.

In winning the Caspian Caviar-sponsored December Gold Cup as a four-year-old, Frodon joins an extremely exclusive club in which the only other member also resides at Paul Nicholls’ Ditcheat yard.

Unioniste was a tenderly aged four-year-old when scoring four years ago, and in what might be a salutary note it remains the biggest win of his career; indeed, the only Graded race he has won.

Unioniste had only one more run after winning the December Gold Cup – inaugurated in 1963 – before the festival back at Cheltenham, where he finished fourth in the RSA Chase behind Lord Windermere, who of course was to win the Cheltenham Gold Cup the following year.

However, Unioniste’s biggest day could yet be in front of him as he is entered for the Coral Welsh Grand National at Chepstow later this month, while he is a best-priced 50-1 shot for the Randox Health Grand National.

FIRST PUBLISHED 2:30PM, DEC 10 2016
He's a good horse and jumps well. It's great for Sam and that will do his confidence the world of good