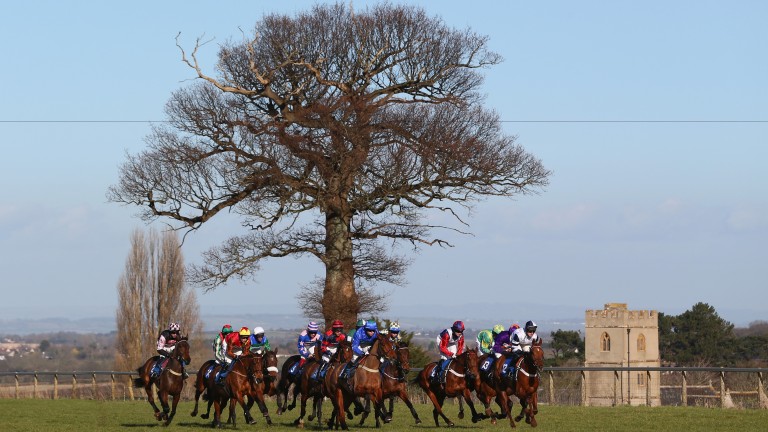 The autumn dry spell that is causing anguish to jump trainers and tracks alike claimed its first victim on Wednesday when Taunton was forced to abandon its opening fixture of the season next Thursday with the going described as hard in places.

Meteorologists warn there is little chance of any significant rain in the immediate future, so quick ground and small fields are likely to be prevalent as the season closes in on some of jumps racing’s key autumn fixtures.

Cheltenham’s clerk of the course Simon Claisse warned trainers and owners next Friday’s cross-country race could be moved to January with a replacement 0-135 four-mile handicap chase run in its place on the Old course unless there is substantial and unforecast rainfall.

And frustrated trainer Ben Pauling has declined to commit his stable star Barters Hill to the beginners’ chase at Newbury on Thursday after walking the course earlier in the week.

The official description at Taunton on Wednesday was firm, hard in places and, after inspecting the track, clerk of the course Jason Loosemore was left with little choice but to abandon the meeting.

“It’s firm and hard in places and therefore unfit for racing,” he said. “Given the dry forecast for the next couple of weeks, with the exception of Friday where there could be a light shower but nothing like what is required to move us to a raceable position, we’ve abandoned at this stage.

“We have irrigation but the amount we could apply to the course would be insufficient to get us to that raceable position.”

Asked if there had been the opportunity to start watering earlier to enhance the track’s chance of staging racing, Loosemore said: “The trouble we have it that there’s a limited amount of water available [in the track’s reservoir] to us.

"We’ve got two inches of irrigation available and it’s critical as to when we put it on. If we'd put it on two or three weeks ago we’d still be in the same position. What we needed and what we still need is some rain.”

Loosemore added: “Since July we are 250mm behind where the six-year [rainfall] average has been. That’s ten inches and this is an exceptionally dry autumn. We have a heavy clay soil and historically this course has always needed a lot of rain to get us back to good ground. We haven’t had that.”

A replacement fixture was being considered by the BHA last night.

Jumps racing at Chepstow and Musselburgh yesterday took place with firm in the going description, while Newbury’s first jumps fixture, which stages a two-runner beginners’ chase and three-runner novice hurdle, is likely to be run on good ground on Thursday with the track having been watered.

Pauling is one of many jumps trainers frustrated by the dry spell but refuses to take unnecessary risks with his horses on quick ground. He said: “It’s a very frustrating time for everyone. My attitude is that we now have two very different seasons – summer jumping and winter jumping.

“The winter horses are the bigger, more traditional chasing type, and slightly heavier. They aren’t built to go on quick ground. Mine are all ready to go,” he said.

“The aim was to get them ready for the middle or end of October. However, the ground is just too quick for them at the moment – and it’s getting even quicker all the time.

“You’ve got to be prepared to pull out and be patient. I'm not going to run anything unless there is ‘soft’ in the description. I’d soon end up with a depleted team if I ran them on the ground we’ve got at present.”

Barters Hill, winner of the Grade 1 Challow Hurdle at Newbury last season, is reported in good form as he is prepared for a novice chase campaign.

“Barters Hill couldn’t be better. He’s done some very nice pieces of work and has been ready to go for the last ten days,” Pauling said.

“We looked at races at Wetherby, Huntingdon, Bangor and Newbury for him. I drove to Newbury on Tuesday afternoon and walked the course myself. There’s a beautiful covering of grass there, but you can only get the stick in an inch at best. I don’t want him to start his season on ground quicker than good.

“Barters Hill is a big, heavy-topped chaser. In the spring you’d run him on good to firm because there would be plenty of juice left from the winter. At the moment, though, after the dry summer and autumn, there is no moisture in the ground.

“It’s a tough old time, but it will change. The rain will arrive at some stage. We’ve just got to be patient.”

Claisse said yesterday: “We’ve had very little rain from the latter part of July. Since August 23 we’ve put down somewhere between eight and 13 inches of water, and have just completed the latest bout of irrigation for the chase and hurdles course to maintain the going at good, good to firm in places.

“The forecast is for just 2mm of rain over the weekend, so the plan is to irrigate again on Monday or Tuesday with the aim of producing good ground for the Open meeting.”

Wincanton also took the decision to water yesterday before its meeting on Saturday, featuring the Badger Ales Trophy and Elite Hurdle, with the hope of achieving “mostly good ground” for Saturday.

Herefordshire trainer Venetia Williams, whose stable is known for its successes on soft and heavy ground, failed to have a single runner in September or October and could look as far afield as Hexham tomorrow to end her own drought with two runners entered at the Northumberland track.

A Met Office spokesman said on Wednesday there was little prospect of significant rainfall over the next ten days.

“Temperatures are expected to fall, and we may see more frosts but not significant rain,” he said.

FIRST PUBLISHED 3:25PM, NOV 2 2016
It's firm and hard in places and therefore unfit for racing