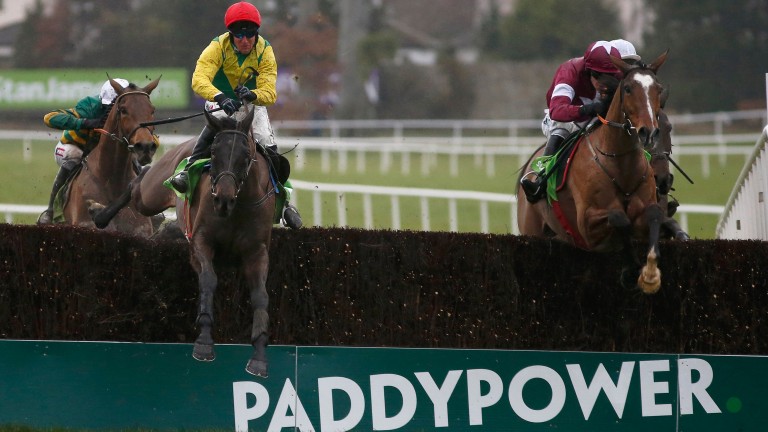 The festival target of the Ann and Alan Potts-owned seven-year-old has yet to be set in stone but a tilt at the Timico Cheltenham Gold Cup, rather than the Ryanair Chase, looks the more likely scenario.

Sizing John, who scored by three-quarters of a length under Robbie Power, ranges in price for the Gold Cup from 8-1 to 14-1, having been as big as 40-1 on Sunday morning, and stated his case for being Ireland's number one challenger with a gutsy success.

Harrington, who has never had a runner in the Cheltenham Gold Cup, said: "I will have to talk to Ann and Alan and see what they want to do.

"He's in three races at the festival but there's no point in taking on Douvan, who has beaten our horse seven times, in the Champion Chase, so it will come down to the Gold Cup or Ryanair. He wasn't stopping at the end of three miles today, so we might go the Gold Cup route.

"We don't know whether he'll get three and a quarter miles, but on better ground he might."

Harrington admitted she had been concerned when the ground went soft at Leopardstown.

"I think he's a horse who would prefer better ground," she said. "Robbie was convinced he'd get the trip, and he does look like a stayer. That was only his third run of the season so he's still a fresh horse."

She added: "They didn't go that strong a gallop and he was a bit keen until he made a mistake [at the sixth]. He was fine after that and was on the bridle turning in. He quickened up well and beat two good horses in Empire Of Dirt and Don Poli. It's very exciting to win such a big race at the first attempt." 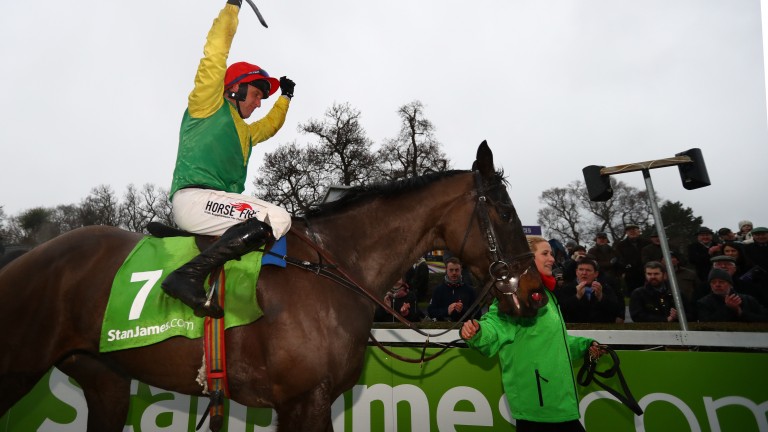 Sizing John landed in front over the final fence and was always holding the second and third in the closing stages.

For the owners, it was a roller coaster couple of hours. Neptune Novices' Hurdle favourite Finian's Oscar won at Exeter but that was followed by the crashing fall of Alary on the same card. Thankfully he clambered to his feet, and Sizing John capped an ultimately memorable day.

Gordon Elliott, trainer of runner-up Empire Of Dirt, who was contesting his first Grade 1 race, and Don Poli, who was a further three-quarters of a length back in third, was pleased with the performance of both horses.

He said: "It was Empire Of Dirt's first run in this league and he ran very well. He travelled so well that you'd have to think the Ryanair will be the race for him.

"Don Poli ran a cracker and would have preferred a stronger pace. It also might have helped had Road To Riches stayed with him a bit longer. He'll go for the Gold Cup and, all being well, the Aintree National."

Carlingford Lough, chasing a hat-trick of victories in the race, was unsuited by the steady pace and was untidy at times in a detached last, though he closed after three out to have his chance before the final fence. He finished three and a half lengths back in fourth, with Road To Riches the other finisher.

Jonjo O'Neill experienced misfortune as both his raiders unseated, Minella Rocco and Aidan Coleman at the fifth and More Of That and Mark Walsh doing likewise at the last when in contention and running much his best race for some time.

FIRST PUBLISHED 8:00AM, FEB 3 2018
He wasn't stopping at the end of three miles today, so we might go the Gold Cup route