Struggling Maguire set to quit as trainer at end of season 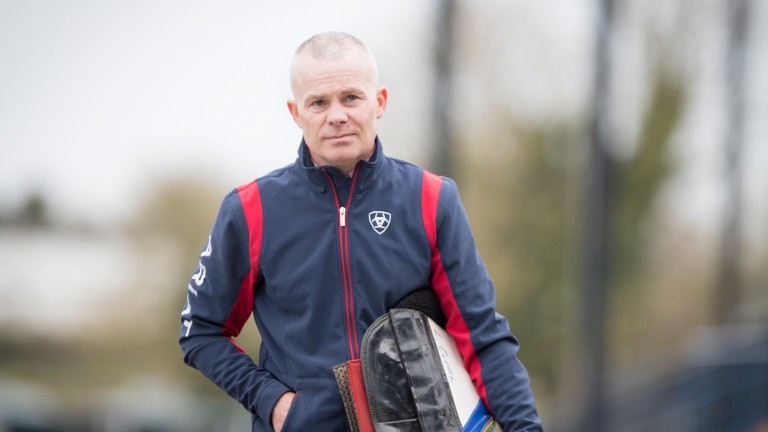 Adrian Maguire saddled a winner at Thurles on the day he announced his intention to leave the training ranks
Patrick McCann
1 of 1
By Richard Forristal 6:15PM, MAR 9 2017

Adrian Maguire dropped a bombshell on Thursday when revealing he expects to quit training at the end of the season due to a dwindling number of horses.

Maguire’s loss to the ranks would constitute yet another high-profile departure as the middle and lower tiers continue to struggle to compete with the superpowers that prevail on the Irish jumps scene.

In announcing their retirements over the past two years, Charlie Swan, Joanna Morgan and Colm Murphy each cited an inability to maintain functioning business models in an environment in which the dominant forces exert an unprecedented degree of influence.

After saddling Knockraha Pylon to win a mares’ beginners’ chase at Thurles on Thursday, an emotional Maguire, 46, echoed such sentiments.

“It's come to a point that I've five paying horses – it is costing me money to train horses,” he said, before welcoming back his runner-up Knockraha Boss in the subsequent chase.

“I'm at a loss, so Pylon will more than likely be one of my last winners, because we can’t keep going. It has been coming for a while. I can’t see myself training next winter – I can’t.

“There's no sign of improvement on the horizon, and I'm open to offers, obviously in the world of racing. It has been building for the last couple of seasons. I’m only the latest one to bite [the bullet]. It's just not happening and is getting tougher.”

Like Swan one of the game’s most iconic figures as a result of a sensational riding career that included Cheltenham Festival wins in the 1992 Gold Cup on Cool Ground and in the 1994 Champion Chase on Viking Flagship, Maguire rode more than 1,000 winners before injury forced him out of the saddle 15 years ago.

He moved back to his wife Sabrina’s locality on hanging up his boots, where they developed a farm that they had bought into a top-class training facility.

Celestial Wave provided Maguire with his first success on the track at Limerick 12 years ago, and she would go on to become a flagbearer for the yard, at Laharn Cross, near Cork racecourse, landing the 2006 Christmas Hurdle at Leopardstown and the 2007 Galmoy Hurdle at Gowran Park.

Seven years ago Golden Kite secured Maguire his most lucrative training success in the Munster National at Limerick.

Thursday's win was his fifth of the season and 90th in all, but it is nine years since his on-track jumps figure peaked at 19.

However, arguably it is as the man who nurtured and produced the brilliant Gold Cup and dual Hennessy Gold Cup hero Denman to win a 2005 Liscarroll point-to-point that Maguire will be best remembered as a trainer.

The lopsided nature of the Irish jumps scene is exacting an increasingly high price further down the food chain. Recently, the Turf Club published its 2016 statistics, showing the number of licensed jumps trainers falling to 372, taking the overall contraction in licence holders to 18.5 per cent since 2007.

It is a situation underlined by this Sunday’s Grade 3 novice chase at Naas, for which nine of the ten entries are owned by Michael O’Leary’s Gigginstown giant, and the other by JP McManus.

Quoted in Thursday’s Racing Post, Horse Racing Ireland chief executive Brian Kavanagh said of the Naas monopoly: “I can understand fully the feelings of trainers who are competing in this environment – we're being told time and time again that it's very hard to win a race in Ireland. But that's a specific policy we set out to achieve, as we want to put an emphasis on quality.”

FIRST PUBLISHED 5:26PM, MAR 9 2017
There is no sign of improvement on the horizon. It has been building for the last couple of seasons