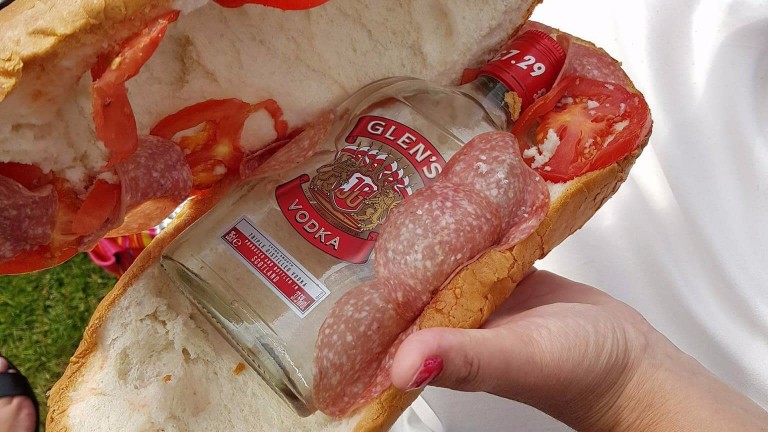 The bottle of vodka lurking in a Southwell sandwich
Southwell Racecourse/Twitter
1 of 1
By Mark Scully 5:53PM, AUG 21 2017

One racegoer's plan to smuggle vodka into Southwell racecourse on Sunday got full marks for ingenuity but none for execution after a steward thwarted her sandwich-based plot.

During routine searches on the gate at the Nottinghamshire venue, a lady's lunchbox was searched by a steward, who became suspicious about the weight of one of her sandwiches.

The offending butty was opened up and the £7.29 bottle was discovered, partially wrapped in tomato and salami.

"As part of the security policy throughout the Arc group, we have searches for alcohol, as well as 'other objects' as part of the anti-terror measures in place for all sporting venues," said Southwell executive director Mark Clayton.

While the bottle was confiscated from the racegoer, bosses at Southwell could see the funny side of the audacious bid to avoid buying a drink on the course and posted the picture on Twitter along with a request for the wittiest caption.

Clayton confirmed the tweet's promise of a prize for the best would be honoured and while the prize itself is yet to be determined, he confirmed it will not be the bottle of vodka itself.

FIRST PUBLISHED 5:52PM, AUG 21 2017
The offending butty was opened up and the £7.29 bottle was discovered, partially wrapped in tomato and salami