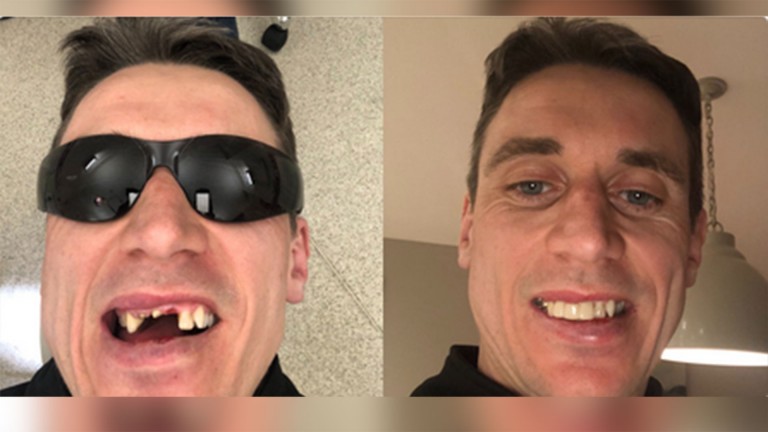 Jockeys are tough, we know that – they demonstrate as much every single day. But it is not just risking life and limb while being chased by an ambulance – their tolerance for pain borders on super human and at Chepstow on Wednesday Paddy Brennan became the latest evidence in a very thick file.

No sooner had he been released on his way to post aboard the Colin Tizzard-trained Brynmawr than the eight-year-old threw his head back and clattered Brennan. This wasn't the sort of cheeky headbutt that earned Jonny Bairstow headlines down under, no, Brennan was hit for six as Brynmawr smashed the teeth right out of his mouth. Just imagine how solid an impact that had to be – and how painful.

Brennan knew his face was in a bad way and he had to get it fixed immediately, but he was in Chepstow, at 4.30pm, and sat on a horse. So he did what any insane jockey would do and rode the race with a throbbing face, finished second, as you do, and then when he got off called his fellow Gold Cup-winning colleague Sam Waley-Cohen to see how best to go about resolving the situation.

Thank you so much too @swaleycohen and his team for sorting this mess out. Happened in the 4 30pm at Chepstow today. pic.twitter.com/dQyKXSkjZh

Waley-Cohen, an amateur rider and racing's very own tooth fairy as he runs a string of dental practices in between winning big races, told Brennan to head to his Cheltenham branch and organised for someone to be there to see him.

"It happened at half four and you can imagine what a nightmare trying to get somewhere at ten to five in the evening is, so the only person I could ring was Sam," said Brennan.

"He managed to get someone who had gone home from work to come back and give me an hour and a half appointment, so I'm very grateful."

"I was struggling with my speech,"added Brennan, with no hint of that issue remaining. "It's just such a relief to have it sorted so quickly, I'm so happy. They're temporaries for now but it gives me a couple of weeks to get it sorted. It's just so perfect."

On the incident itself he added: "When the girl let me go we went one stride and then he threw his head up and headbutted me. All I was thinking on the way round was it'd ease the pain a little bit if he could win."

FIRST PUBLISHED 1:32PM, MAR 22 2018
When the girl let me go we went one stride and then he threw his head up and headbutted me