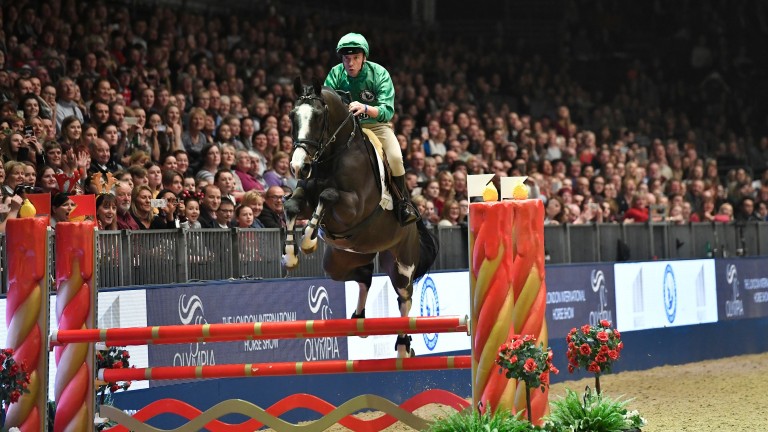 Tis the season to be jolly, of course, and there is enough jollity here to keep us going all the way to Twelfth Night.

Ten of the finest jockeys we've ever seen are having the time of their lives on Friday night, and because of that so is everyone else at Olympia.

It's a brilliant concept. Get the boys together – winners of 59 championships, Flat and jumps, between them, more than half a lifetime of titles – and ease them gently out of their comfort zone in the Markel Champions Challenge over eight showjumping fences.

Make it all for a charity dear to them and us, the Injured Jockeys Fund. Tell them the only prize is bragging rights and a rosette they'll throw into the crowd at the end, and watch them turn on a tour de force.

Peter Scudamore reckons he's the longest traveller, until someone mentions Ryan Moore has jetted in from Japan just for this. Sir Anthony McCoy and Charlie Swan are still duelling with the traffic on the M4, but John Francome is leaning back against a pillar, fending off digs about his ancient breeches – "They're only three years old, and I look better with them on than with them off," he splutters – and pondering his previous experience.

'All for a great cause'

"That was about 100 years ago, wasn't it?" says the former schoolboy showjumping champion, veteran of the old Wembley Arena. "I've got a nice horse, though, had a school on him three weeks ago.

"It's all for a great cause – Markel have been brilliant to sponsor it – and normally you'd struggle to get the likes of Ryan, Jim Crowley and Jamie Spencer, but they wouldn't miss this. We [the jumps team] will be trying hard, but whatever happens it'll be great entertainment."

Just watching them having a laugh together, the usual pressure off, is great entertainment. They all trot out into the ring for the warm-up, perched on huge saddles cinched round huger horses – apart from Richard Dunwoody, whose grey partner is only pony-size – and a beautiful chaos quickly develops.

Moore has never sat on his colossal steed before and is nearly carted, to his evident delight. Poles go down, hairpin turns are bent wildly out of shape, the difficult fifth fence poses problems to all; later, Richard Hughes and Crowley are found deep in discussion about stride patterns. These fiercely competitive souls are taking their fun seriously. 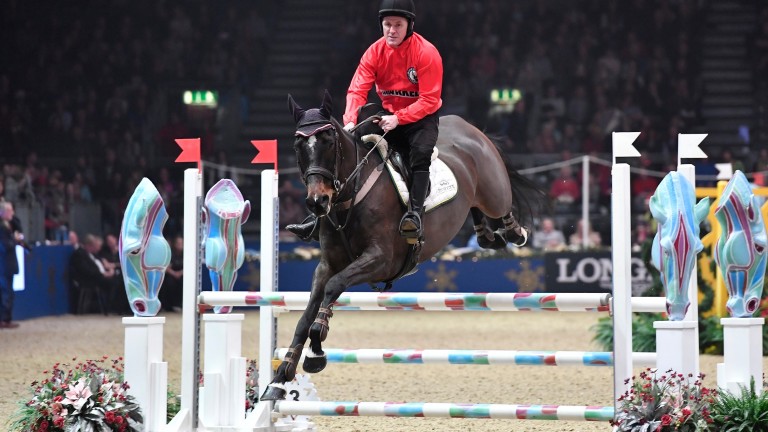 AP McCoy back in the saddle in the Markel Champions Challenge at Olympia
Kit Houghton
Then Frankie Dettori appears from nowhere to win the toss and put the jump jockeys into bat. Dettori has the proud distraction of his son Rocco in the Shetland Pony Grand National to cope with – Rocco later wins, like the good thing of the day should – but is putting his game face on.

"It's a bit nerve-racking really," says this veteran of every great race on the globe. "There'll be 10,000 people screaming, it's very exciting, and us Flat boys won last year so we're defending champions. Pressure, yeah?

"I'm riding the same horse again – haven't sat on him since – and I didn't have time to walk the course so I hope I get the order of the jumps right. It's a complicated course!"

As time ticks away, the jockeys withdraw to the collecting ring to collect their thoughts, to continue the relentless badinage, and IJF supremo Lisa Hancock watches them from the rails next to Juliet Redfern, managing director of the equine insurance team at Markel.

Still that boy of 16

"Juliet's a fantastic supporter; the sponsorship of the whole event comes directly to us," says Hancock. "The publicity is great for us – Frankie was on This Morning this week – but it's just as nice to be able to give something back to these guys.

"I'm always asking them 'would you mind signing this?' or 'please can you do this?', and jockeys do so much to help their charity, so this is something we can do for them. Everyone's here with their families and they're all having a lot of fun."

Now the fun starts for everyone. Francome leads out the jump jockeys with a swift clear round, as though he was still that boy of 16, and Swan also goes clear with the fastest round of the night. He boots his horse down to the last like it was Istabraq and this was Cheltenham, like old times again.

It's a tough act to follow and the Flat jockeys find the poles getting in the way, especially the notorious fifth fence, the crowd roaring as the timber scatters. Dettori's the last man in but even his clear round can't swing it in his team's favour, and the jump jockeys have the title in the bag, with Swan the individual champion.

"Pride's a bit dented," says Crowley, the fastest if not the cleanest of the Flat brigade. "But what a buzz – better than the day job!"

And then everyone begins talking about same time next year. As if the thrill will have worn off by then.

Ryan Moore: a fascinating insight into the mind of one of the world's greatest Who's like Haaland? The big names in racing who don't like TV interviews 'Will I be going for the jockeys' title? I don't know what it is anymore' 'Enable looks magnificent' - Frankie Dettori eyeing return of dual Arc winner Ray Cochrane calls time on 20-year career as agent to Frankie Dettori