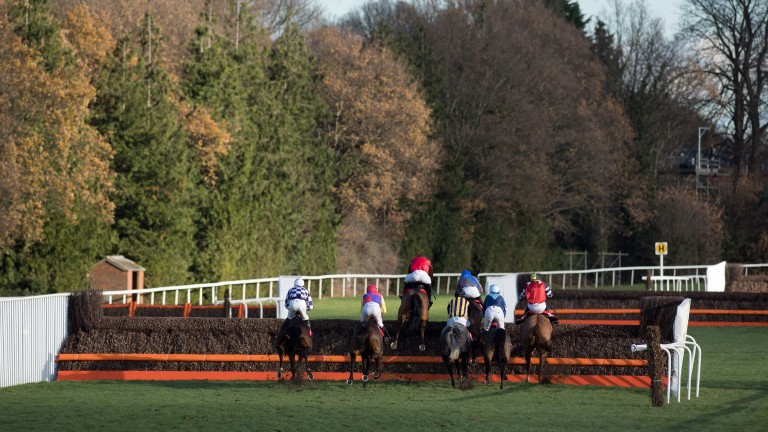 Mustmeetalady managed to escape Sandown after unseating his rider at the first fence
Edward Whitaker
1 of 1
By Jon Lees 5:53PM, DEC 8 2017

Sandown is likely to strengthen its boundary security after a loose horse escaped out onto the road and was found a mile and half away on a local cricket pitch.

On the track in the amateur riders' handicap chase the Jonjo O'Neill-trained Mustmeetalady got no further than the first fence where he unseated James King.

But after continuing riderless for almost a circuit he then burst through two running rails eventually finding a way through the course perimeter and onto the road.

Clerk of the course Andrew Cooper said: "I have never known an incident like this before. The horse jumped through two sets of plastic rails to get to where he got out onto the road and was found about a mile and a half away on a cricket pitch at West End, where he was caught.

"We saw him go and our estates manager Craig Williamson was first on the scene closely followed by one our vets. We sent one of our horse ambulances to pick him up. The horse has a little knick but that may have happened in the tumble anyway.

"I've never known a horse get out there. There is a racecourse rail on the outside of the bend which he has gone through. He then found the service road down the side of the course. At this point there is a big set of vehicle gates which were closed but either side of that there is a small section of white railing which he got through. I think we will look to make the outer barrier more secure."

Cooper told a stewards inquiry he would discuss with the BHA Inspectorate as to whether more could be done to prevent a repeat of the incident. His explanation was noted.

FIRST PUBLISHED 5:53PM, DEC 8 2017
We sent one of our horse ambulances to pick him up. The horse has a little knick but that may have happened in the tumble anyway