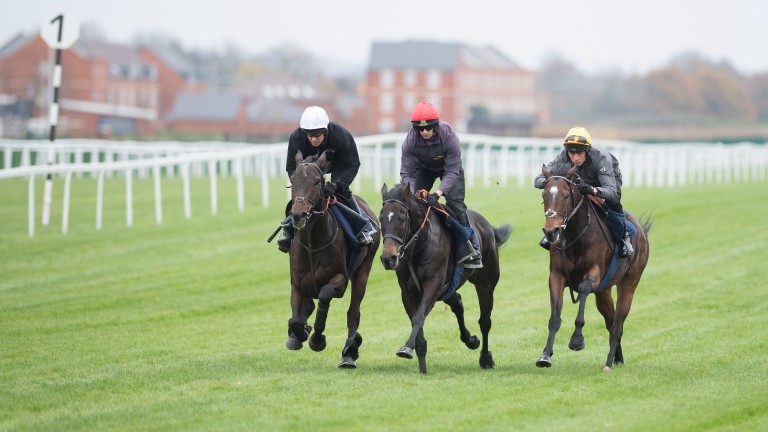 Nicky Henderson reckons title holder Buveur D'Air is exactly where he wants him for his return to action at Newcastle next week but acknowledged the comeback run of big Champion Hurdle rival Faugheen was "frighteningly impressive".

That view was shared by top jockey Barry Geraghty, who exercised the classy Buveur D'Air with Seven Barrows stablemates Charli Parcs and Divin Bere at Newbury on Tuesday morning and warned Britain and Ireland's top two-mile hurdlers will have to raise their game to compete with Faugheen, the 2015 Champion Hurdle winner who made a stunning return to action in Sunday's Morgiana Hurdle at Punchestown, having been off since January last year.

His demolition job meant he replaced the JP McManus-owned Buveur D'Air as the 9-4 favourite for the Unibet-sponsored championship at the Cheltenham Festival in March, with his rival a general 9-2 shot, although William Hill offer 5-1 about the six-year-old retaining his crown.

Henderson, who won a record sixth Champion Hurdle thanks to the son of Crillon's spring success, was thrilled with the workout – in which Charli Parcs also caught the eye – and just hopes everything goes smoothly for a heavyweight showdown in the new year.

"That was perfect and the timing is spot on for the Fighting Fifth," he said after Buveur D'Air showed his turbo engine was in full working order in advance of the Grade 1 on December 2.

"It's his first run of the year and his first since he won at Aintree in April. We're pleased with where he is and he'll be ready for Saturday week.

"I watched Faugheen with JP and we just looked at each other and went, 'Errr'. We'll have to sharpen our pencil a bit, but it is getting sharper.

"Faugheen was impressive, he was frighteningly impressive, but we've all got to get there and Willie [Mullins] knows that as well as I do. We all know there are going to be elephant traps all over the place to catch anything that goes wrong.

"You'd like to think they'll meet in March – like Altior and Douvan – because that's when it really counts. You don't want to be slamming the hell out of each other practising."

Geraghty, who flew into Heathrow to partner Buveur D'Air and was straight back down the M4 after the gallop, added: "Faugheen was so impressive two years ago and he showed on Sunday that he retains most of that ability. The bar was high before and it looks pretty high again. We'll all have to up our game I'd say."