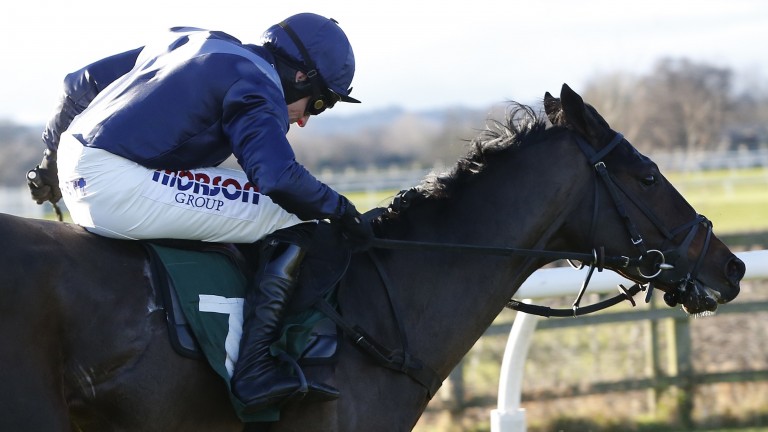 Solo Saxophone scores on his debut under Harry Skelton at Catterick
Louise Pollard
1 of 1
By Mark Scully UPDATED 3:04PM, DEC 19 2017

Solo Saxophone gave his sire Frankel a winner over jumps with his first runner when getting up late to take the juvenile hurdle at Catterick - but it looked far from likely at halfway.

Although he was sent off 6-4 favourite he hit 99-1 in running on Betfair after he lost many lengths with a mistake at the fourth flight. After jumping rather too big over the next he was then off the bridle, with rider Harry Skelton struggling to keep him in touch with the leaders.

But he responded well and after picking off his rivals one by one he led after the last and went on to win by four lengths.

Bought for €62,000 having raced on the Flat for Moyglare Stud and Dermot Weld, he is now owned by BGC Racing and is trained by Dan Skelton.

The winning rider said: "He got a bit of a fright at the first down the back, one jumped across him. I thought he'd struggle to get back into it on a tight track like this but to his credit he picked up well and from the second-last I always thought he was going to win.

"It's always a stiff ask to win first time over hurdles so I'm pleased with that. He certainly has an engine and he could be alright. He had fair form on the Flat, although he had blinkers or a visor on for most of his runs - he seemed fine and I think he could be better in a bigger field."

Solo Saxophone keeps up a tradition of first Frankel runners in a particular sphere winning. Cunco, his first representative on the Flat, scored at Newbury in May last year.

FIRST PUBLISHED 1:05PM, DEC 19 2017
It is always a stiff ask to win first time over hurdles so I'm pleased with that. He certainly has an engine and he could be all right