Focus on popular chaser Pete The Feat – or should that be The Boss? 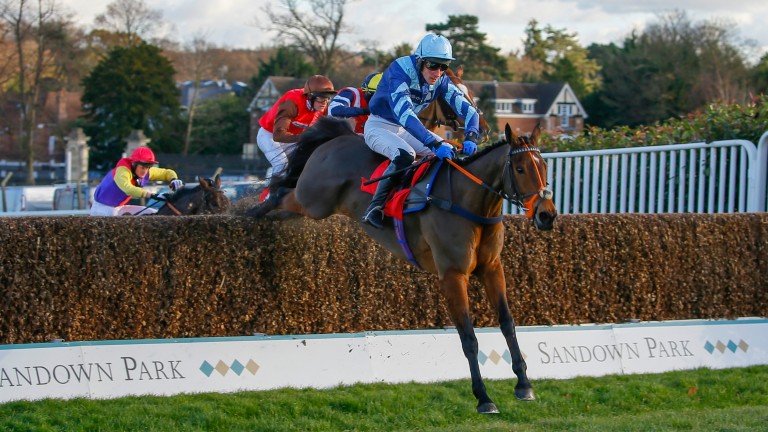 Pete The Feat in winning action over Saturday's course and distance a month ago
Mark Cranham
1 of 1
By Bruce Jackson UPDATED 7:50PM, JAN 3 2018

Everyone loves an old warrior and they take centre stage at Sandown on Saturday when contesting the final of the popular veterans' chase series. Trainer Charlie Longsdon tells us all about last year's winner Pete The Feat.

What sort of character is Pete The Feat?
He might just have turned 14 but he certainly doesn't want to be old! He bosses everyone and when he does that you know he's in good form. If he was quiet you would be thinking it was time to retire him. He is as hard as old boots and likes to be out in a field all the time.

Does he get any special treatment in the yard?
He is spoiled all the time and he drags everyone everywhere he wants to go. They don't have a say in it but everyone loves him.

Who is his closest friend?
Apart from Loose Chips who will again be running in the same race as him it has to be Wilf Rayer, who is another veteran being in his 70s. He rides Pete The Feat every day and lets him get away with murder and that keeps him as sweet as he is.

How do you rate his chances on Saturday?
With 16 entered it looks like being another big field but it was good to see him back winning last month. It was over course and distance as well and he remains in good form. I don't think the 3lb he has been raised will be a reason for him getting beaten. He has always been a really good, fast jumper of his fences and he loves the whole thing. It looks like the ground will be soft but that isn't a problem either as he won the race on soft ground last year.

FIRST PUBLISHED 5:46PM, JAN 1 2018
He might just have turned 14 but he certainly doesn't want to be old! He bosses everyone and when he does that you know he's in good form