Faugheen: will not been seen at the Cheltenham Festival
Mark Cranham
1 of 1
By Richard Forristal 11:14AM, FEB 7 2017

Buveur D'Air, who had been on the novice chase road until last week, was on Monday evening the new Stan James Champion Hurdle favourite after the revelation that Faugheen would miss the race for the second year in a row due to injury.

On a day that Willie Mullins' roller-coaster campaign suffered another hair-raising plunge, it was also revealed his leading Racing Post Arkle hope Min would likewise miss the festival.

It was all change at the summit of the Champion Hurdle market, with Stan James making Buveur D'Air – winner of the Contenders Hurdle last Saturday, before which he had won a couple of novice chases – 3-1 favourite.

Petit Mouchoir, at 4-1, is now Ireland's number one hope according to the race sponsor, who quoted Yanworth at 9-2 and Yorkhill, who would need to be supplemented, at 5-1.

Altior hardened as favourite for the Arkle, with most firms going 1-2 (from 4-5).

Faugheen and Min – both owned by Rich Ricci, who has already this season fatally lost Vautour through a paddock accident and whose Annie Power was recently ruled out of Cheltenham through injury – had missed their engagements at Leopardstown last month, but connections were very much hoping they would make the festival.

Mullins, who suffered the blow of having 60 horses removed from his yard by Giggingtown House Stud at the start of a campaign which could end with the loss of his title to Gordon Elliott, told the Racing Post on Monday: "It was confirmed this morning that Faugheen has suffered a stress fracture to his right-hand ilium bone.

"He's definitely out of Cheltenham but I'm hoping he'll be okay to return for Punchestown."

The ilium bone runs along a horse's rump, and it was this same injury – rather than the muscle strain that was misdiagnosed at the time – that led to Faugheen's absence from the Irish Champion Hurdle. His win in that contest in January 2016 was the last time he was seen in public. 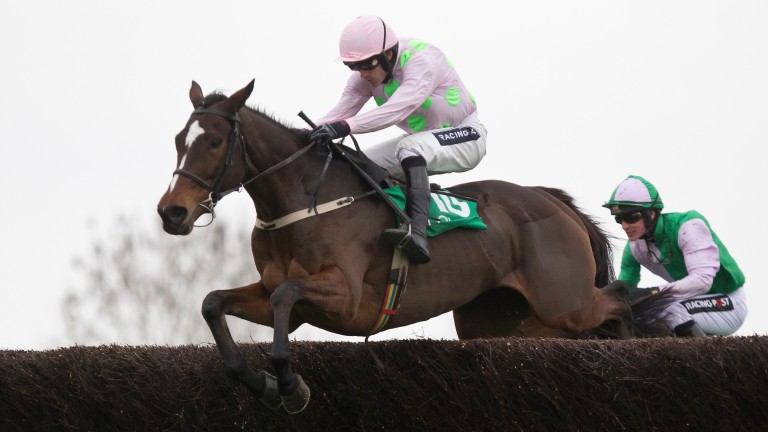 Min: also out of the Festival with a bruise to his cannon bone
Patrick McCann
Mullins would not be drawn on whether he would consider following the lead of connections of Buveur D'Air by switching last season's Neptune Novices' Hurdle winner Yorkhill for a tilt at what is an incredibly open-looking Champion Hurdle.

While Punchestown is the new target for Faugheen, the Fairyhouse Easter Festival in mid-April will be as soon as Min returns to action.

Mullins said: "Min has been found to have a bruise to a cannonbone and is definitely out of the Arkle. He needs some time off and I hope to have him back for Fairyhouse and/or Punchestown."

The absence of Faugheen could well persuade those behind the likes of The New One to be more definite about targeting the Champion Hurdle, rather than the Sun Bets Stayers' Hurdle in his case, although connections of Superb Story and Apple's Jade stated on Monday the news would not affect their thinking.

Superb Story's trainer Dan Skelton said: "I was always going there with him straight from his New Year’s Day win at Musselburgh. It'll be the first time he’s taken on this type of opposition, up until now he’s been in handicaps. It was a good weight-carrying performance at Musselburgh and we just need luck on our side to get there, and if we do there'll be no excuses. We’re really excited about going there.

"These are a nervous five weeks to come and I hope what has happened to Willie Mullins doesn’t happen to anyone else – us included.”

Skelton is no one-trick pony and added: “Ch’Tibello will go to the Kingwell and then the Champion Hurdle. That’s always been the plan.”

Like Superb Story, Apple's Jade is around the 20-1 mark for the Champion Hurdle, but Eddie O'Leary, for owners Gigginstown, said: "We never make plans over news on horses that don’t belong to us, so today’s news doesn’t alter our thinking. Apple’s Jade will still be aimed at the mares’ hurdle and Petit Mouchoir will be our only runner in the Champion Hurdle, all being well.

"We'll also have Identity Thief for the Arkle providing the ground is okay for him."

O'Leary added: "It’s desperate news for Willie and Rich and I'm very sorry for them. We had our own troubles earlier in the year when we had to retire Don Cossack and when Valseur Lido was then ruled out for the rest of the season, and it wasn’t nice.

"Unfortunately this is the game we're in. It’s terrible news for Willie and all of his team."

November 6
Multiple Grade 1 winner and three-time Cheltenham Festival winner Vautour has to be put down after an accident at Mullins’ yard in which he breaks a foreleg. The same day Avant Tout suffers a fatal injury at Naas on his seasonal reappearance.

December 28
Former Closutton residents Outlander and Don Poli fill the first two places in the Grade 1 Lexus Chase at Leopardstown for Gordon Elliott, in which Mullins’ Djakadam can manage only third, having been sent off at 5-4.

January 29
Another horse to have previously resided at Closutton, Petit Mouchoir, sets a relentless gallop to see off his three rivals and claim the Irish Champion Hurdle at Leopardstown. Both Faugheen and Min miss their intended runs on the day and Mullins’ substitutes fail to make an impact.

February 6
Mullins reveals neither Faugheen nor Min will make Cheltenham due to injury.

FIRST PUBLISHED 3:47PM, FEB 6 2017
It was confirmed this morning that Faugheen has suffered a stress fracture to his right-hand ilium bone

'Who knows how good she is' - Statuaire denies My Mate Mozzie in a thriller Resurgent Bryan Cooper in treble form as Dunvegan finally comes good Long-absent Braganza proves surprise packet as Willie Mullins saddles a treble 'She jumped and travelled really nicely' - raid pays off for My Sister Sarah 'Davy Russell tells me he'll go on. I'll believe it when I see it, I think' Ladbrokes Trophy: trainers and jockeys on the big-race contenders at Newbury