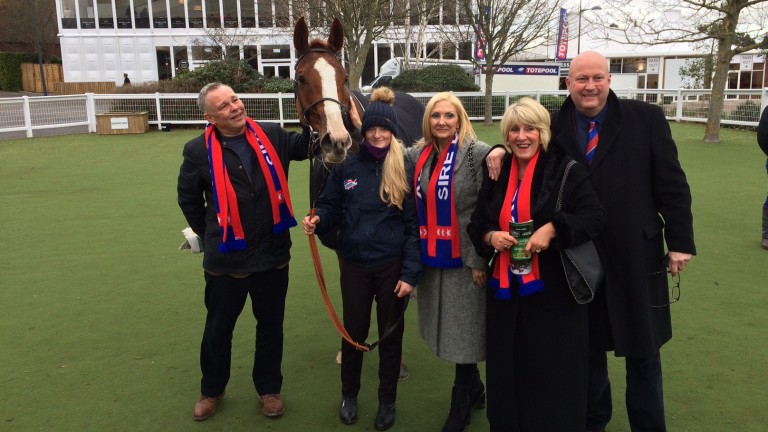 Sire De Grugy with some of his owners: (from left to right) Steve Preston, Di Heron and Angie and Baz Lockett, with groom Phoebe Cruise after running what is set to be his final race at Cheltenham
1 of 1
By Lee Mottershead UPDATED 7:00PM, DEC 17 2017

Jamie Moore yet again spoke movingly about his "best mate" after it was revealed star two-mile chaser Sire De Grugy, the horse he rode to win 17 races from his father Gary's yard, has almost certainly run his last race.

Following a sixth-place finish at Cheltenham on Saturday, an emotional part-owner Steve Preston announced the white-faced chestnut will spend his retirement in West Sussex with the Moores, in whose care the soon-to-be 12-year-old became one of the sport's most popular performers.

"We all love the horse and we'll do that right thing," said Jamie Moore, who in the 2013-2014 season completed a clean sweep of five major races on Sire De Grugy – the Tingle Creek Chase, Desert Orchid Chase, Clarence House Chase, Champion Chase and Celebration Chase. 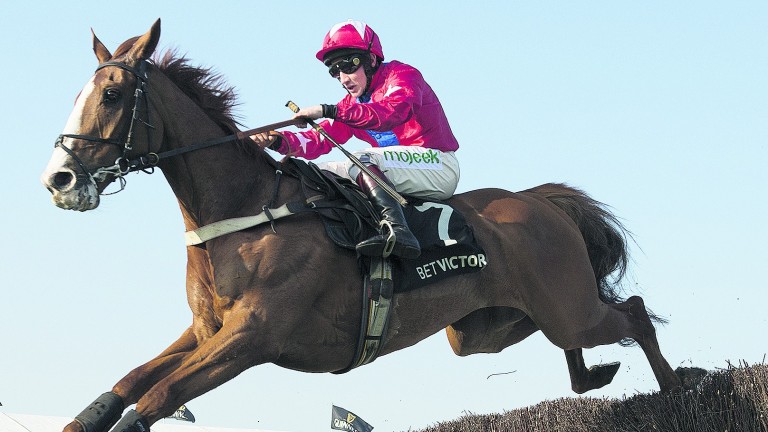 24: Sire De Grugy clears the last fence en route to winning the 2014 Champion Chase
Edward Whitaker
With tears in his eyes, Preston said: "He has been the most wonderful horse and, of course, he'll stay with the Moores. He has been their icon horse. They will look after him and make sure he has a fantastic retirement.

Preston added: "There is no point pushing him any harder. He has achieved everything we could possibly have wished. Jamie said he wanted it and still had the appetite for it but in the home straight it just wasn't there.

"I think his aches and pains have now just got a bit too much for him. He has had lots of injuries over the years. He has had an arthritic condition since he was six but he never ever did anything but give 100 per cent. This is just wear and tear now. He deserves to have a great life. It's time for him to retire." 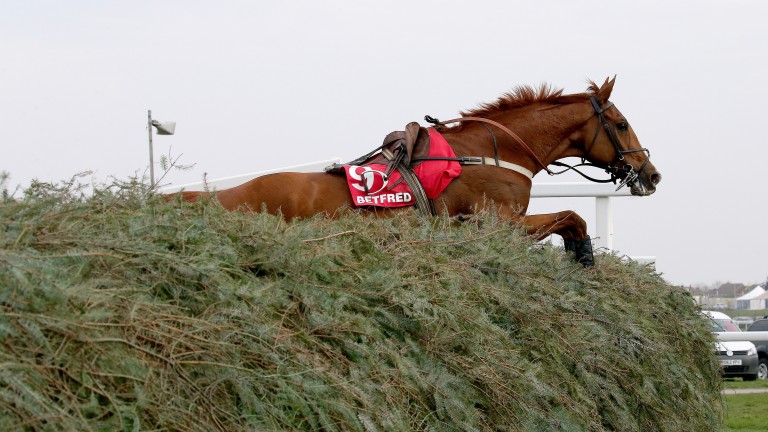 Sire De Grugy clears the Chair after making an early exit in the 2015 Melling Chase
GROSSICK RACING PHOTOGRAPHY 0771GROSSICK RACING PHOTOGRAPHY 0771 046 1723
Preston stressed a final decision on Sire De Grugy's future would be taken by Gary Moore but there was no doubting his own wish for the horse to be retired – and there was nothing in what Moore said to sense he feels differently.

"He has been the horse of a lifetime for us, the best horse I've ever trained and a great horse for his owners," said Moore.

"What made him so special was his strength. Not many horses could have gone through as much as he did and yet carried on with such enthusiasm. There also aren't many horses who could have won all the big races he did in his Champion Chase season."

That is a view with which the trainer's son completely agrees.

"He is my best mate and we've achieved a lot together," said Jamie Moore. "The day we bought him in France I sat on seven horses. He was the cheapest but he was the best.

"Thanks to him I've won some of the big races I used to watch when I was growing up. I've won 17 races on him. That's remarkable. If you won 17 selling plates on a horse you would like him. 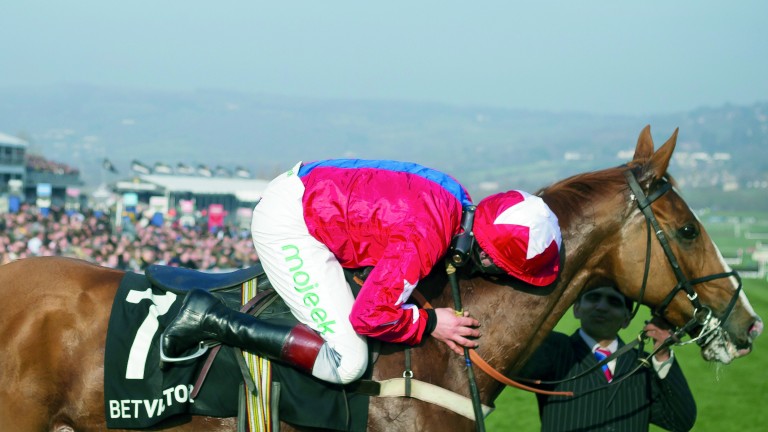 Jamie Moore embraces Sire De Grugy after the pair's Champion Chase triumph
Patrick McCann
"He's been brilliant for all of us and he'll stay at the yard. He gets turned out with the kids' ponies. He won't be going anywhere."

After this, his final day at work, there was applause from a handful of racegoers as the old boy exited the unsaddling area reserved for unplaced horses, just a short walk from the winner's enclosure he entered to jubilant scenes back on his day of days.

Those racegoers could not have known this was surely his farewell appearance. They simply wanted to pay due tribute to a wonderful horse. That wonderful horse leaves the stage with his white-faced head held high.

THREE OF THE BEST

Celebration Chase (Grade 2) Sandown, April 2013
The first real sign the chestnut with the big white blaze could be something special came with what was at the time his best display in the strongest renewal of the Celebration Chase for many a year. Joint-favourite Finian's Rainbow looked the winner on touching down after the Pond fence but Sire De Grugy chased him down on the approach to the last and then showed an impressive turn of foot to pull nearly two lengths clear at the line.

Queen Mother Champion Chase (Grade 1) Cheltenham, March 2014
Reigning champion Sprinter Sacre might have been a high-profile absentee but Sire De Grugy filled the void with a career-defining performance. There were question marks about his ability to handle the undulating track and drying ground yet he silenced the doubters with a dominant victory that was cheered to the rafters. After storming home by six lengths from Somersby, the popular chestnut was greeted by a wave of euphoria in the winner's enclosure as the Preston family and friends started the noisy celebrations.

Tingle Creek Chase (Grade 1) Sandown, December 2015
After finishing a tailed-off last in the Haldon Gold Cup a month earlier, Sire De Grugy was being written off with even those closest to him wondering whether he was past his best as he approached the age of ten. However, back at his beloved Sandown he stirred the soul by fighting off Special Tiara in a thrilling finish. There was accidental interference at the last as the winner jumped to his left and across the runner-up but no-one could begrudge Gary Moore's star his second Tingle Creek.