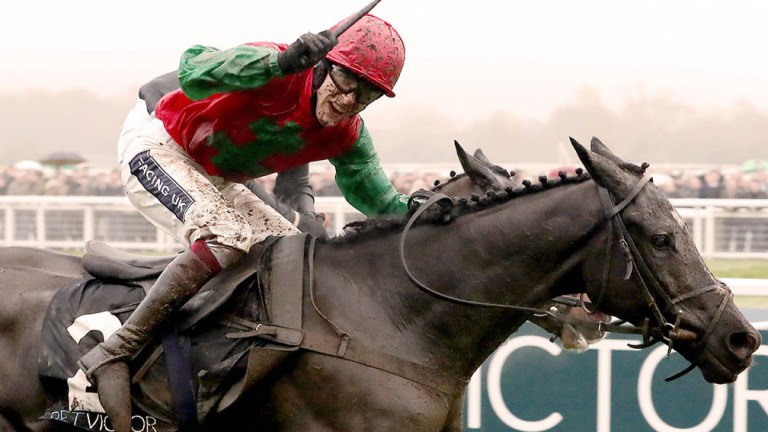 Taquin De Seuil and Aidan Colman land the spoils in the BetVictor in 2016
John Grossick (racingpost.com/photos)
1 of 1
By David Baxter UPDATED 6:43PM, JAN 26 2018

Huntingdon's meeting on Friday was overshadowed by the loss of one of Jonjo O'Neill's stable stars as Taquin Du Seuil was fatally injured in a fall.

Described as a Rolls-Royce of a horse by owner Sir Martin Broughton, the 11-year-old provided connections with some fantastic moments during his career and his loss was felt keenly by all associated with him.

Jockey Aidan Coleman, who partnered Taquin Du Seuil to victory in the BetVictor Gold Cup in 2016, was unhurt in the fall but was visibly shaken when returning to the weighing room.

He said: "I'm fine but it hurts mentally. The BetVictor was one of the best days of my life."

Winner of ten of his 36 starts, Taquin Du Seuil's biggest win was also at Cheltenham in 2014 when he claimed the Grade 1 JLT Novices' Chase.

Broughton cited that victory as his best moment, saying: "I think the JLT was the highlight, they don't come much better than that. He's been a star right from the start.

"He gave us our first Grade 1 and our first Cheltenham Festival winner and then came home in the BetVictor. He was the best-looking horse we ever had, he virtually always won best turned out. He was a Rolls-Royce of a horse and you don't get them very often."

Desperately sad that we lost Taquin Du Seuil today. He was such a star giving his all and giving us so many great days. My thoughts are with Sir Martin and Jocelyn Broughton and friends and to all of our team who loved him so much.

Asked to describe Taquin Du Seuil's nature, Broughton added: "He could be a grumpy bugger. He was very proud of himself but he could be quite grumpy in his box. He had a lot of character.

"Once when Channel 4 were round for The Morning Line they were trying to get him to come to the front of his box but he just turned round and showed his bum to everyone, he wasn't having any of it."

The loss was hard to take for Bara Ponicka, who had looked after Taquin Du Seuil for the last three years.

She said: "He was an amazing horse and loved what he was doing. He was one of the best horses I've ever met in my life. He made my day when he won the BetVictor, it was one of my best memories.

"He knew he was good-looking and was good as well. He was always trying to kick me when I was trying to brush him. He wasn't bad, just cheeky, and he loved his carrots everyday.

"It will be very weird when I come to work and his stable will be empty."