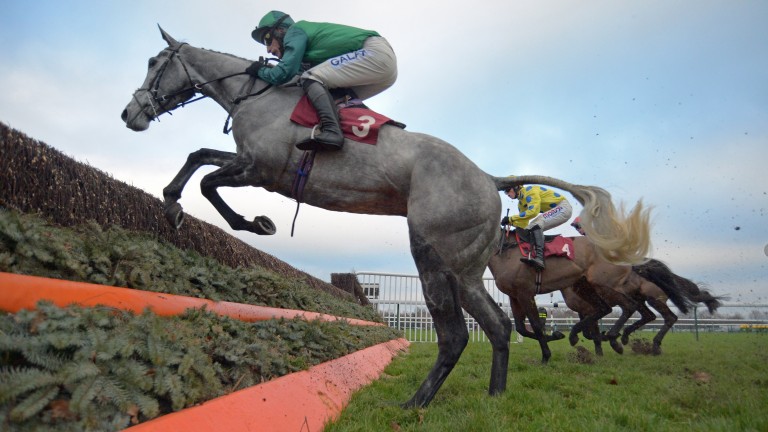 Bristol De Mai is set to start favourite for a £200,000 Saturday showpiece that has been on his radar ever since he produced one of the most visually stunning performances of last jumps season at the racecourse to which he now returns.

The sponsors make Bristol De Mai 6-4 market leader to capture a Betfair Chase in which he will seek to end the winning run of Cheltenham Gold Cup hero Sizing John and prevent Cue Card, arguably the sport's most popular performer, from claiming a fourth success in the shiniest jewel in Haydock's crown.

Buoyed by Splash Of Ginge's win in the BetVictor Gold Cup, Nigel Twiston-Davies will send Bristol De Mai up the M6, hoping to see the six-year-old build on his reappearance victory in the Charlie Hall Chase at Wetherby, where stable companion Blaklion took silver medal honours after Cue Card crashed out five fences from home.

However, even stronger form than that was recorded at Haydock in January, when Daryl Jacob sported the silks of Simon Munir and Isaac Souede and steered Bristol De Mai to a 22-length triumph in the Peter Marsh Chase. That came on soft ground similar to that he is likely to encounter on Saturday, when the Grade 1 feature will be contested over a newly extended trip.

"He has had a run and is in good form," said Twiston-Davies.

"Ever since he won the Peter Marsh we've been thinking about the Betfair Chase because we know he was so good when he went there that day. We're very hopeful but we're taking on the best in the country, so we can't be over-confident.

"He does go on the ground, that's for certain. However, Cue Card has won in that ground as well. The poor boy has a bit to prove now, but we'll see what he can do on Saturday."

Commenting on the market walk of Sizing John, who on Monday drifted to 3-1 from 6-4, Twiston-Davies – who does not expect Splash Of Ginge to take up his Haydock hurdles entry – added: "I couldn't quite understand the vibes about Sizing John. If there are any chinks in his armour we will try to find them."

While there had been doubts over whether Harry Cobden would be able to begin his association with Cue Card on Saturday due to the requirements of boss Paul Nicholls, those seemed to ease on Tuesday when his name appeared against Jean Bishop's veteran at Haydock, where Nicholls is poised to have runners in other races.

Cue Card will be renewing rivalry with Tea For Two, who narrowly denied him at the Grand National meeting but then flopped on his seasonal return back at Aintree.

"It wouldn't surprise me at all if he won – there's no point going to a race like this not being optimistic," said trainer Nick Williams of the 10-1 shot.

"He is well and I'm expecting him to run well. I don't know what went wrong at Aintree. It certainly wasn't a fitness issue as he went there fit. He just didn't pick up the bridle and I don't know why. He is a quirky horse but also talented when everything falls right.

"He was rock-solid consistent last season and from the King George to the Bowl his form matched Cue Card's pound for pound. We're looking forward to the race and ground isn't an issue as we've never thought of him as ground dependent."

Haydock's ground remained soft on Tuesday, with clerk of the course Kirkland Tellwright saying: "We had 10mm of rain on Monday and we're expecting wet weather right through to Wednesday night, by which time we should have had the worst of it, probably, in total, another 10mm. From Thursday onwards it should just be showers.

"As I've said before, the ground on Saturday is not going to be any quicker than soft, but it is also perfectly reasonable to believe it may well not be heavy."

The Coral Hurdle, the highlight of Ascot's Saturday card, has ten possible runners, headed by JCB Triumph Hurdle hero and the sponsor's 11-10 favourite Defi Du Seuil, whose likely opponents will include Lil Rockerfeller and the Munir and Souede-owned L'Ami Serge, winner of this year's French Champion Hurdle.

If you enjoyed reading this, you might enjoy...
John just fine says Harrington despite Haydock drift
Hatch sheds tears on an emotional afternoon for two fine young men

FIRST PUBLISHED 5:21PM, NOV 21 2017
We're very hopeful but we're taking on the best in the country, so we can't be over-confident