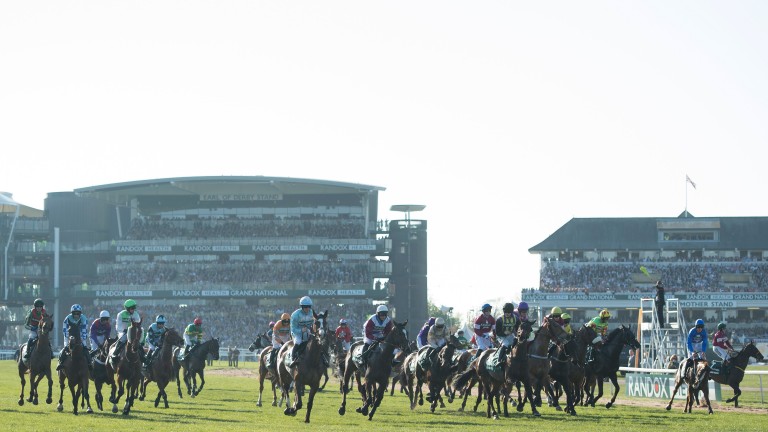 Many seated areas at the Grand National sold out within hours of going on sale
Edward Whitaker
1 of 1
By Tom Kerr 2:07PM, JUL 28 2017

Aintree has promised to review its ticket sale systems after Grand National badges for several areas sold out within hours of going on sale, only for many to appear at inflated prices on ticket resale sites.

Tickets for the Randox Grand National festival went on sale to past customers on Tuesday morning, but by the same afternoon many tickets – including for most of the seated areas – were completely sold out. However, hundreds were available for purchase from controversial secondary ticketing firms such as Viagogo and Stubhub.

Sold-out tickets for the Princess Royal stand, which have a face value of £145, were on sale on Stubhub for £204.50 on Friday. Stubhub customers could buy up to eight at a time and a message stated all eight seats would be together.

On Viagogo, meanwhile, the same tickets were retailing for £178.20, with 52 tickets advertised for sale across the various parts of the Princess Royal stand. Viagogo alone claimed to have a total of 240 tickets available, largely in sold-out seating areas. Aintree confirmed the fully booked areas have a total capacity of 3,500.

While the website to purchase tickets was only flagged to past customers, it was publicly accessible, meaning anyone who was forwarded the link could purchase tickets, while a small number of tickets were also sold via a call centre without checks to ensure buyers were previous ticket-holders. Individuals were able to purchase dozens at a time.

The rapid sellout left many loyal customers disappointed. Tony Connell, who has attended the Grand National for 40 years, attempted to purchase tickets at 4pm on Tuesday but discovered five of the six seating areas were fully booked.

"I decided to conduct a little experiment and check with a number of ticket agencies," said Connell. "There I discovered plenty of badges for the sold-out areas already on sale at a large premium.

"It seems clear to any reasonable person that a large number of these tickets have been purchased by persons who have no intention of attending but who simply wish to take advantage of the position and make a profit."

Aintree managing director John Baker said fast ticket sales demonstrated the popularity of the Grand National meeting but conceded he was disappointed regular racegoers had seemingly lost out to those whose intention was to immediately resell tickets for profit.

"From my perspective it's very disappointing and frustrating this is happening as the idea of the pre-sale is to look after regulars," he said.

"There are clearly a couple of flaws in the system that this has exposed which we'll need to address for the future.

"The link on the email can be forwarded. There is a reason why that is permitted. What you can find with people in a group is they take turns to book each year, but that can possibly mean some people could send it on to people who haven't booked before."

Baker defended the practice of allowing individual buyers to purchase large numbers of tickets in one go.

He said: "I'd find it hard not to offer groups who have come with us before to get the seats they want and have had before, but we'll look at this and see whether action needs to be taken."

FIRST PUBLISHED 1:07PM, JUL 28 2017
It's very disappointing and frustrating that this is happening as the idea of the presale is to look after regulars