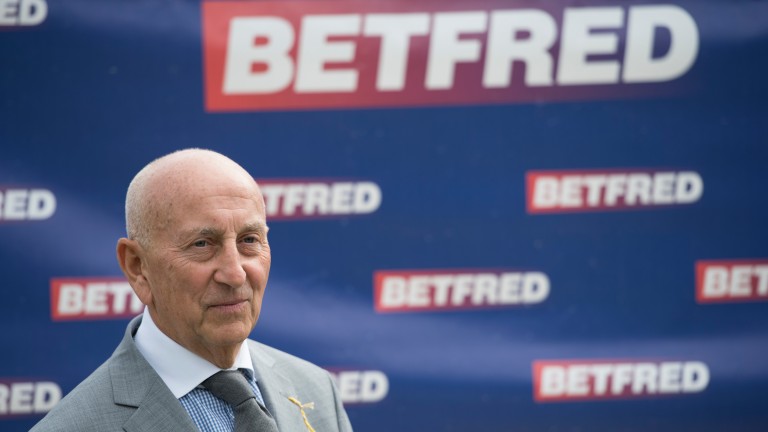 Betfred's Fred Done: his firm will shut shops and pull sponsorship in response to Tote row
Edward Whitaker (racingpost.com/photos)
1 of 1
By Tom Kerr UPDATED 9:59AM, SEP 21 2017

Betfred will in effect end their commercial relationship with British racing next July when their exclusive deal to operate pools betting expires, chief executive Fred Done has revealed, warning that the sport and his company "have got to learn to live without each other".

The firm, a prolific race sponsor and on-course betting shop operator, will shut almost all their track offices and cease sponsoring in July 2018 when the pools licence ends. The move will affect more than 600 races and potentially cost racing close to £6 million a year in lost sponsorship income alone.

Only races at Ascot and the Betfred-owned Chelmsford, both of which will retain the Tote post-July 2018, will avoid the sponsorship cull, while at least 49 of the firm's 51 course betting shops will close.

Done's dramatic move is in response to the decision of 54 British courses to launch their own pools betting operation next year, marking the end of the Tote's 90-year presence on most British tracks and its monopoly over pools betting.

Among the prominent races that will need new sponsors are the Ebor at York, the Cambridgeshire and Cesarewitch at Newmarket and the Grand National Trial at Haydock. Betfred sponsored close to 1,000 races in 2016, almost one in ten of the 10,035 contests staged last year. All of their sponsorship deals expire in July 2018.

Done said: "As from next year, we will fulfil everything we promise. We will not go back on anything or dodge anything or get out of contracts.

"I gave racing the opportunity of saying, 'We don't want you as a sponsor,' and I would have walked away. They didn't take that opportunity, but as of next July we will not be sponsoring anywhere but for the exceptions of Ascot and Chelmsford.

"All our betting shops on the racecourse, with the exception of Ascot and Chelmsford, are shutting down. We won't be represented on any [other] courses. Several racecourses are really disappointed we aren't staying, but I won't stay where I'm not wanted.

"If anything, the regret I have about not being on racecourses is that our association with racing is broken now and will be finished next year. But that's not business, it's sentimental."

Done added: "As from next year, racing and Betfred have got to learn to live without each other."

Done, who defends his record as the Tote owner since 2011 in a Racing Post special report, believes racing has "never forgiven" him for winning the contest to buy the pools operator and has "had this agenda since day one to run their own tote", despite Betfred returning more than £12m a year to the sport, above the £9m required under the Tote sale agreement with government.

The outspoken betting shop magnate has frequently clashed with racing over the years. His bid to buy the Tote was fiercely opposed by many within the sport, which backed two alternative bids for the pools operator before government picked Done's £265m offer, a sum later reduced to £233m because of early payment.

In more recent times, Done refused to join up to British racing's authorised betting partner programme, which sought voluntary payments from bookmakers' offshore turnover, and initially declined to do a deal with betting shop television channel The Racing Partnership, representing 15 Arena Racing Company-owned tracks and seven independents, signing up only in July after a seven-month impasse.

Despite this often-tempestuous relationship, Betfred have remained one of racing's most important and prolific commercial partners. While Betfred's betting shops will continue to pay levy and media rights to the sport, this latest dispute appears to herald the end of all other aspects of that partnership.