Adam Wedge: "There's no explanation. I apologise to everyone who backed the horse, the owners and the trainer Evan Williams"
Martin Lynch
1 of 1
By James Burn UPDATED 6:30PM, JAN 1 2018

Jockey Adam Wedge was left close to tears at Exeter on Monday when he was disqualified from the beginners' chase on 4-7 favourite Report To Base and banned for 21 days after bypassing an obstacle that should have been jumped.

Wedge, sporting the familiar blue silks of the Rucker family, was riding the six-year-old for his boss Evan Williams in a race in which 12 fences should have been jumped but three were bypassed because of standing water and another two because of low sun.

To complicate matters further, the water jump was also missed as it cannot be the first obstacle negotiated.

Wedge, Matt Griffiths and Tom Scudamore – the other rider in the three-runner £18,400 contest – correctly sidestepped that before Report To Base built up a commanding lead and was in full control.

However, Wedge's nightmare was about to begin as he bypassed what had become the third-last fence before jumping the final two and strolling to a short-lived 26-length victory.

A stewards' inquiry was immediately called, but by then the 28-year-old had realised his error as the Scudamore-ridden Valhalla was placed first.

Visibly upset, the jockey, whose biggest wins include the Midlands Grand National and Scottish Champion Hurdle, told the Racing Post: "There's no explanation. I apologise to everyone who backed the horse, the owners and the trainer Evan Williams.

"I just had a brain freeze I think. I can't even tell you what happened, to be honest – the first thing I knew [about the mistake] was when Tom Scu told me." 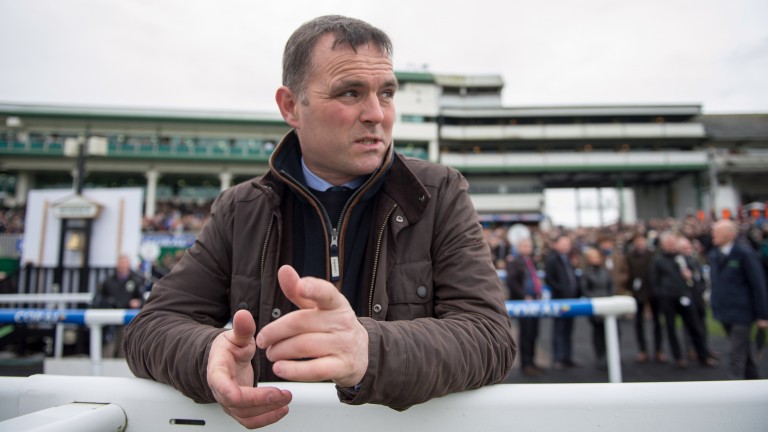 Betfair Sportsbook and Paddy Power paid out on Report To Base as a winner, while Williams offered Wedge his support via telephone.

He said: "It's happened before and will happen again. What's the point in me saying anything? At the end of the day, we can't get it back, but nobody has died – that's the main thing. What's happened has happened and let's look to tomorrow."

Further backing came from Scudamore, who added: "It's a very unfortunate incident and I feel very sorry for Adam. We all make mistakes and it's very confusing [with the fences being omitted]. It's horrible for it to happen.

"We're bypassing a lot of fences today and it's very unfortunate. Adam's going to pay the penalty and I feel terribly for him. We've all done things like it – I jumped a fence instead of a hurdle one day – but he's still a fine jockey."

"It's like a Monopoly board out there – there's so much dolling off and poles and everything," he said. "It's just one of those things.

"The water jump wasn't dolled off but we all know you can't jump that first and Adam's just bypassed one in the straight. There's nothing you can do about it and everyone makes mistakes."

Exeter's clerk of the course Barry Johnson, who gave the meeting the go-ahead first thing, but was forced into two inspections following heavy rain, was also interviewed by stewards.

He was satisfied with the actions of his staff, and said: "My team has done a fantastic job getting racing on. They've been out there since 6am and it was on, it was off and it was on again.

"They've been under pressure to take out three fences because of the waterlogging and two for the low sun, then the water jump issue, which the jockeys picked up on, but they've done the right things."

FIRST PUBLISHED 3:40PM, JAN 1 2018
I can't even tell you what happened to be honest – the first thing I knew was when Tom Scu told me