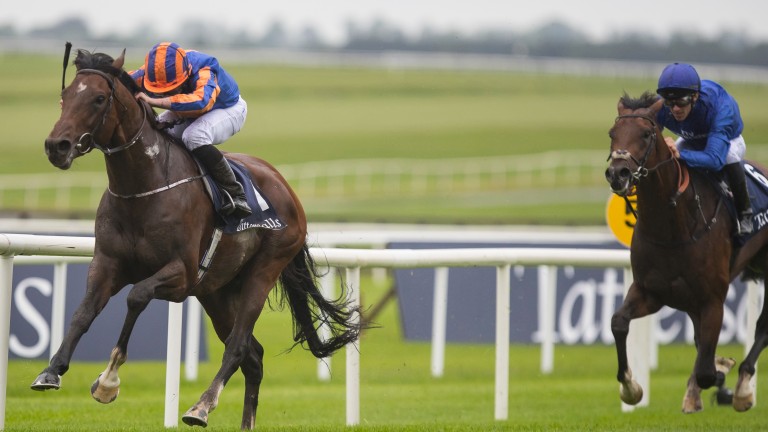 Churchill was hailed "an exceptional colt" by Aidan O'Brien, who has trained a few in his time, after completing a Classic double at a rain-drenched Curragh.

While a hot 4-9 favourite to follow up his 2,000 Guineas win at Newmarket three weeks earlier, the rain that hammered down clouded minds as well as skies. But any doubts were proved unfounded as Churchill dismissed his five rivals to give Ballydoyle boss O'Brien an 11th victory in the contest.

In becoming the ninth horse to achieve the Newmarket-Curragh Guineas double – which was first recorded by Right Tack in 1969 –Churchill was a 36th Irish Classic winner for O'Brien, 20 years on from his first.

Churchill scored by two and a half lengths under Ryan Moore, who was sealing his second success in the Classic after riding Gleneagles to victory two years ago.

Godolphin's Thunder Snow, who performed an embarrassing bucking bronco routine in the Kentucky Derby and had to be pulled up, put those antics firmly behind him to finish a really good second, with Irishcorrespondent third.

Churchill, who hit the front well over a furlong out, has now won his last seven starts and joins Rock Of Gibraltar, Henrythenavigator and Gleneagles as Ballydoyle aces to have completed the 2,000 Guineas-Irish 2,000 Guineas double.

O'Brien said: "I was a bit worried when the rain came and changed the ground but all the rest of the team weren't concerned. It might have been different had it been his first run of the season, but he handled the conditions well.

"He's an exceptional colt and an unusually relaxed one. Nothing fazes him. He cruises through his races and saves petrol and he quickens really well.

"When Ryan said go on him today, all of a sudden he was there and had the race won.

"He can be a bit jig-joggy before a race, but it's like an athlete warming up for a race or a game, and mentally he always remains relaxed."

Regarding future plans, O'Brien continued: "We'll keep him to a mile, certainly in the short term, and the St James's Palace will be next. But it's possible we might step him up to a mile and a quarter later in the year."

Moore said: "Churchill has been a pleasure to ride from day one. We went a good gallop today and you could tell he wasn't enjoying the ground. With the pace he has, better ground is always going to suit him best.

"I think he's improved since Newmarket and that he will continue to improve."

Thunder Snow's performance understandably pleased trainer Saeed Bin Suroor, given what had happened at Churchill Downs a few weeks earlier, and he said: "Our horse has run very well and was beaten by a better horse – a superstar – on the day.

Irishcorrespondent, who finished four and a half lengths back in third, could take his chance in the Dubai Duty Free Irish Derby.

His trainer Michael Halford said: "He ran a good race and we'll probably step him up to a mile and a quarter before deciding about the Irish Derby."