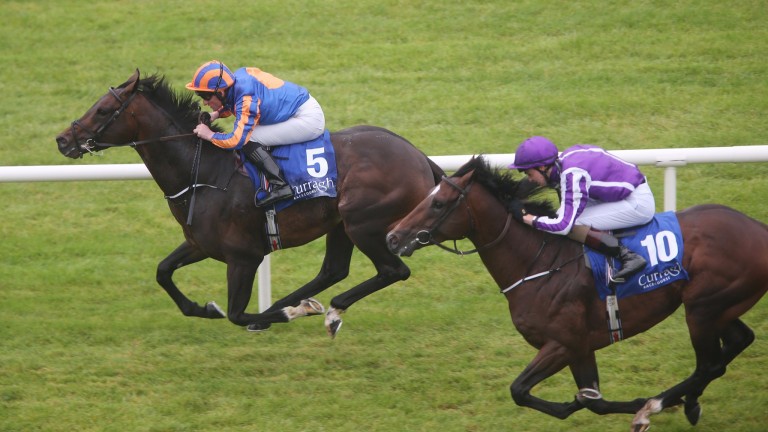 Both Big Ben (left) and Tree Of Knowledge joined Joseph O'Brien from his father Aidan
CAROLINE NORRIS
1 of 1
By Tony O'Hehir 6:00PM, NOV 6 2016

Both carry the colours of JP McManus and Barry Geraghty partners Landofhopeandglory, who won on his debut as a two-year-old and was subsequently placed at Listed level.

Mark Walsh rides Big Ben, who raced only twice on the Flat, winning a 1m2f maiden at the Curragh on his second start.

O’Brien said: "They've schooled well and are ready to start. We're hoping they will run well and progress through the season.”

Gordon Elliott and Henry de Bromhead, both of whom enjoyed big weekends, clash in the four-runner 2m4f novice hurdle (2.55) in which they run Fire In His Eyes and Balzac Turgot respectively.

Both five-year-olds are owned by Gigginstown House Stud. Balzac Turgot won a 2m maiden hurdle at Limerick in May and De Bromhead said: "He ran very well when second to Penhill in a Grade 3 at Tipperary last time and I think the longer trip will suit him. He's in good form."

Bumper winner Fire In His Eyes got off the mark over hurdles at the second attempt when scoring over two and a half miles at Punchestown last month.

Elliott said: "He's a big honest galloper who doesn't have much pace. He'll stay further and is going there in good form."

Steve Mahon is represented by Highway Royal, a maiden hurdle winner at Ballinrobe in August who finished a good third behind She's A Star at Galway a week ago, while the Noel Meade-trained Mahler Ten, who won a 2m2f maiden at Downpatrick on his debut last month, completes the line-up.

FIRST PUBLISHED 6:00PM, NOV 6 2016
He's a big honest galloper who doesn't have much pace. He'll stay further and is going there in good form